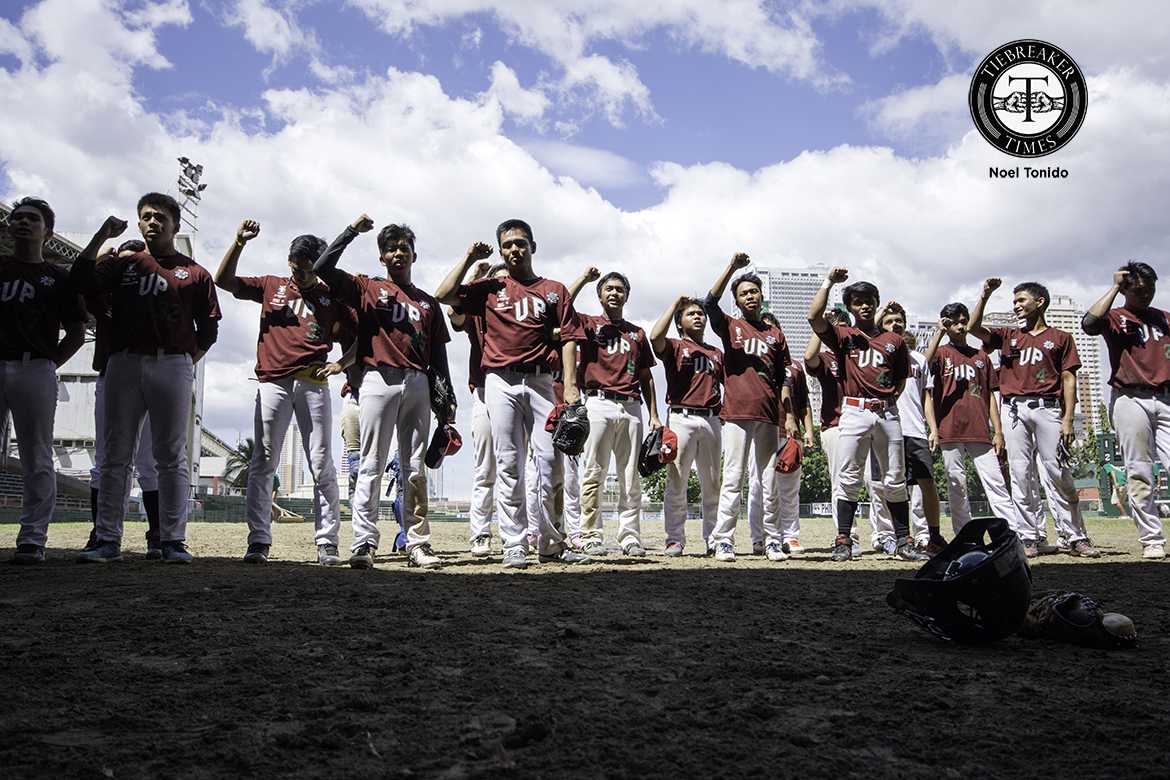 After a disastrous 0-6 start, the University of the Philippines Fighting Maroons dominated the Adamson University Soaring Falcons on both ends in a 10-3 blowout win to salvage what is left of their UAAP Season 78 campaign Thursday afternoon at the Rizal Memorial Baseball Stadium.

UP starting pitcher Mig Herrera struggled on the mound to open the game. After a flyout of leadoff batter Gerald Riparip at center field, Herrera struggled to find the strike zone in walking Lourence Ruiz and Mark Manaig. A single by Raymond Matic loaded up the bases after while a fielders choice with Jerome Yenson at bat resulted to the ouster of Matic and a run for Ruiz to give Adamson a 1-0 lead to end the first inning.

On the other end, rookie Raymond Nerosa also struggled to anchor the Adamson defense. After walking three batters in the opening inning, UP’s first batter for the second inning Hanson Landicho was walked. After a single by Phonso Balagtas and a walk of Mark Tuballas, Landicho was picked-off by Adamson’s shortstop but Balagtas was able to steal home base. This resulted to Nerosa being relieved of pitching duties after for Christian Maigue.

After shutouts for both sides in the next two innings, the Fighting Maroons were able to pick up two runs in the fifth inning. With one out, SJ San Juan and JJ Cinco gained base due to walks. Gabby Yang then connected with a grounder to left field to bring home San Juan. A fielding error by Adamson’s third baseman EJ Gesmundo then gave Cinco the path to gain home and give UP a 3-1 lead.

Adamson was able to gain the two runs back in the bottom end of the inning. Erwin Bosito opened the inning with a single to left field. After a groundout of Riparip and a flyout of Lourence Ruiz, Herrera walked Manaig. Sensing fatigue from his pitcher, UP head coach Anthony Dizer subbed Herrera out for Gab Rodriguez. An error though by left fielder JJ Cinco led to a run for Bosito while a single by Yenson later on gave Manaig the tying run.

No pitching change could have stopped the momentum of the Maroons during the sixth inning. Adamson’s third pitcher of the game Raymond Matic walked the first batter of the inning Balagtas due to balls. A groundout of Tuballas followed but a failed fielders choice attempt on James Legaspi led to Balagtas gaining base. A sacrifice fly by Gino Aganon then paved the way for a Legaspi run to give UP a 5-3 lead. A double by San Juan to right field tried to continue the rally but a base-running error by Cinco ended the inning with his ouster at second base.

After back-to-back errors, Cinco was able to redeem himself in an emphatic eighth inning that provided the insurance runs for UP. With two outs and the bases loaded, the rookie from Marist School connected with a huge that grounded to center right field that brought home Tuballas and Aganon. Another single by Gabby Yang, brought home San Juan that extended the UP lead to five runs prior to the ninth inning.

The Fighting Maroons were able to pick up two more run in the final inning. On the other end, Gab Rodriguez and the UP fielding did not allow a single hit in the last four innings of the game. Rodriguez capped their first win of the season with two strikeouts to the delight of the UP faithful in attendance.

Looking forward, the veteran head coach wants the same intensity the Fighting Maroons showed in this game for the last three games of their season. “Same thing, same intensity from the start. Huwag sila magrerelax,” he closed.

The UP Fighting Maroons look to start a streak as they face neighbors Ateneo Blue Batters (6-1) on Sunday, February 26 at 7:00am. The Adamson Soaring Falcons, on the other hand, have the DLSU Green Batters (6-1) next in the last game of the day.