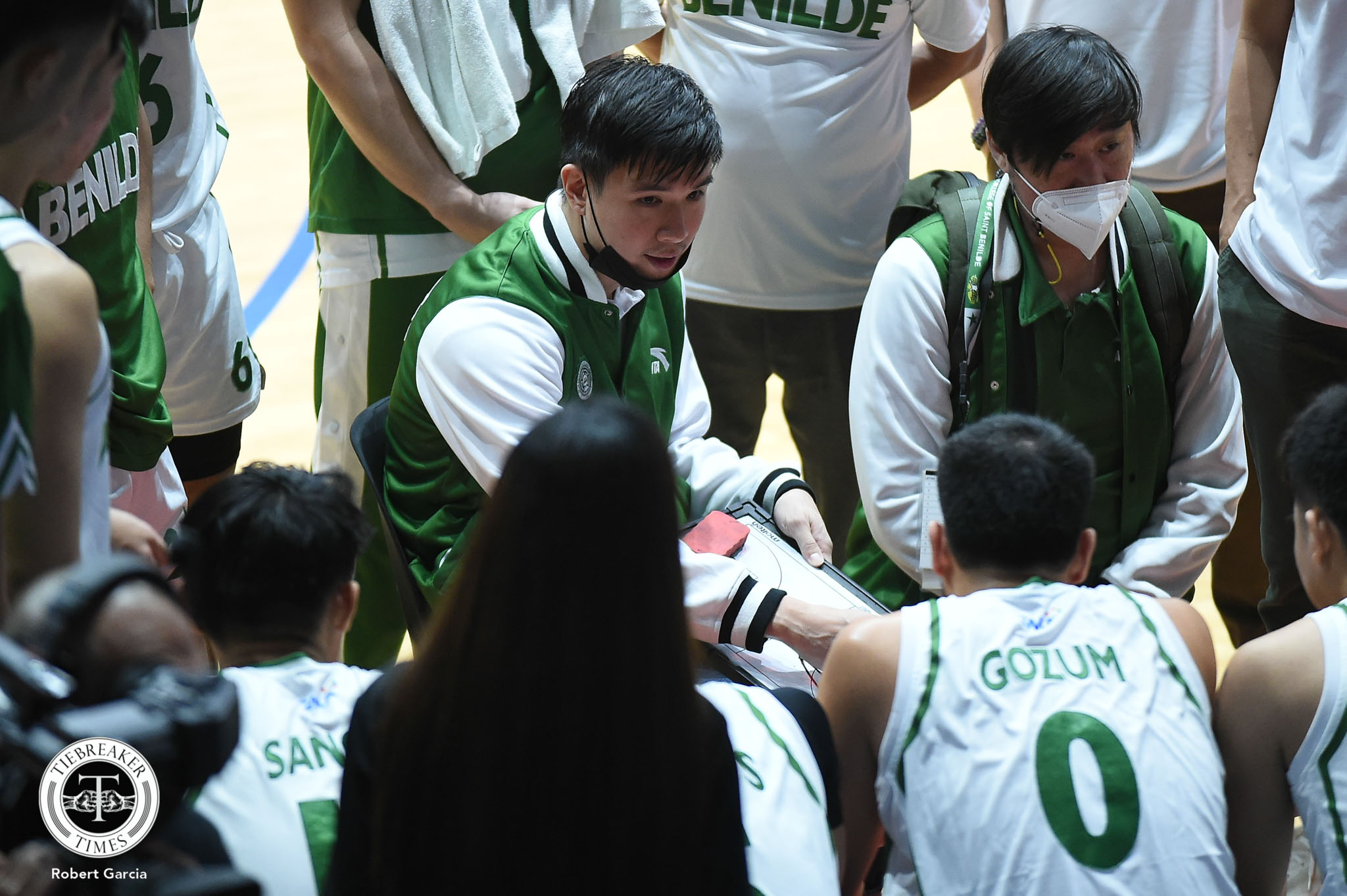 After the incident last Tuesday, College of St. Benilde and head coach Charles Tiu does not expect an apology from Jose Rizal University and its players, especially on the side of John Amores.

Regarding the incident, JRU’s Dr. Vicente Fabella has already reached out to CSB’s school president Bro. Edmundo “Dodo” Fernandez with their sincerest apology.

But for everyone else, Tiu said it would be nice to receive an apology. One for his players and for him.

“[Apology] To me, no. To the players, no. But I do know that their school owner Mr. Fabella has reached out to Bro. Dodo, our school president. That’s okay. To me, it’s nice. It’s not a school thing,” Tiu expressed.

“Maybe some individuals should come out, which would be nice to hear from them. But no, we haven’t heard anything from anybody.”

The head tactician and his player are now experiencing difficulties due to the suspension of his three key players in Mark Sangco, Ladis Lepalam, and Chris Flores.

The Blazers lost with an 83-89 upset against University of Perpetual Help System DALTA. And Tiu said the incident played a big factor since he didn’t have those three players – especially Sangco and Lepalam.

“I’m sure it has been, but we can’t use it as an excuse. For me, personally, I can’t sleep. My phone has blown up. But players, except for Jimboy [Pasturan] and Taine [Davis], cause they had some interviews with the lawyers the last few days and they had to come home late on Tuesday for their hospital check-up,” said the head tactician.

“The bigger factor probably was losing my three key guys, especially Sangco and Lepalam. They’re a big part of our team; of course. They’re suspended, and I can’t do anything about that. But if that incident didn’t happen, they easily could have played. That’s why I’m a bit frustrated.

“Give credit to Perpetual; they played very well. Their shots were falling and we couldn’t find a way to defend them. They deserve to win, and we stunk it up,” he continued.

Tiu and his players Davis and Pasturan went to the San Juan prosecutor’s office earlier the day, filing a case against John Amores for assault without cause.

For his players, though, Tiu urged them to move on from the issue and focus on the game since he could see it was a big factor in their loss against Perpetual.

“We just moved on from it. We just focused on basketball. The issue of losing today, I wouldn’t put it on what happened. Maybe there were some distractions for some guys who had to go to the Prosecutor’s Office,” Tiu explained.

“We’ve been busy before the tip-off, but for the most part, we’ve been missing our key players who are suspended.”

The Blazers are still in the second spot with a 10-4 win-loss slate this season. But going against San Sebastian College-Recoletos on Tuesday, he encourages his team to earn it the hard way.

They’ve already experienced several losses this season – including against Emilio Aguinaldo College, which was also undermanned, suffering a 75-80 defeat last October 16.
Despite the loss, though, Tiu is still looking ahead so his players can try to make a name for themselves this season and get that championship crow.

“I told them it’s their season. If they want to make things happen and make names for themselves, the best way is to win. And they put themselves in a position to earn that top two spot, but we keep losing some games we shouldn’t lose. Then you’re not gonna get that top two spot,” he said.

“But the thing is, we still have a chance to get that top two, still be a bit harder. We have to earn it the hard way. We’re still missing some key guys, and if we play like this, Baste will kill us and they’ll blow us out,” he continued.

“Losing against EAC, losing against this team which is undermanned again and been stumbling… For a team that has championship or playoff aspirations, [we] should win these games. Still credit to Perpetual, they eliminated us last season. They’re a good team, they’re well coached, and we just got to do a better job.”