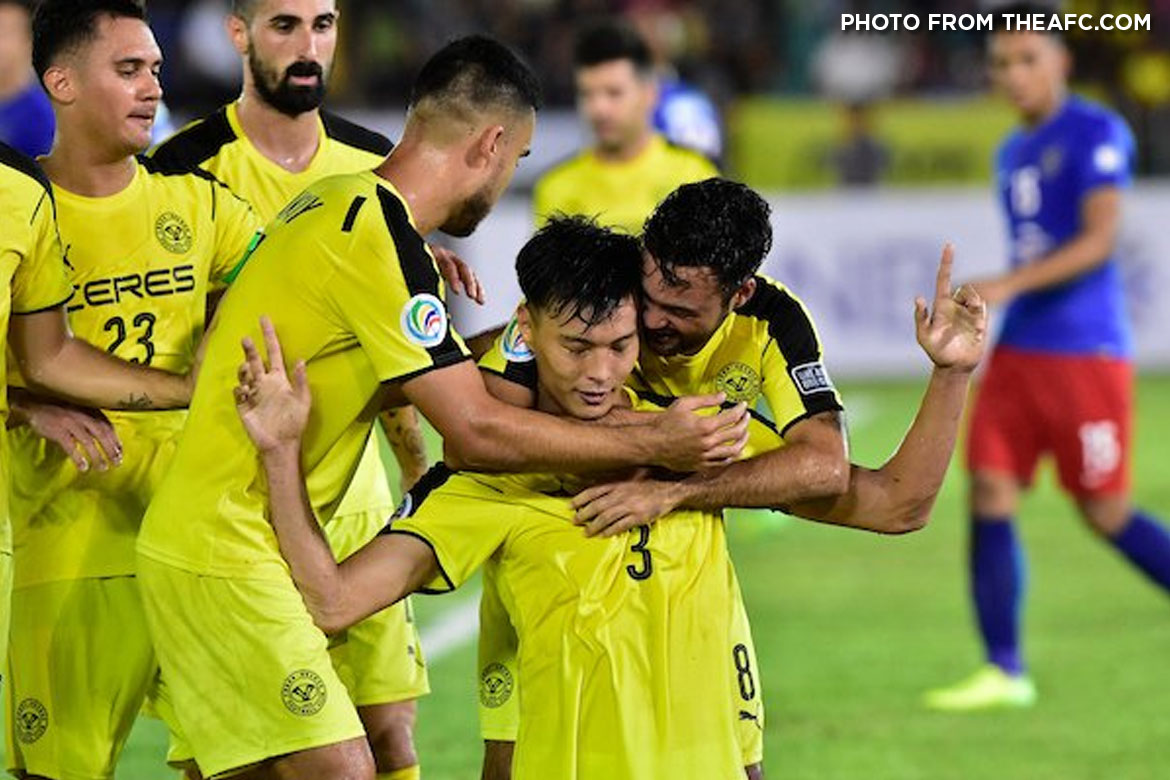 Down 3-2 on aggregate, Ceres-Negros looked to bank on the combination of their solid home form and opponents’ JDT’s travel sickness in this season’s AFC Cup when the second leg of the ASEAN zone semifinal was due to be played at the Panaad Stadium in Bacolod.

And after 90 minutes of pulsating football, the Philippine club did just enough to finish the job by winning 2-1 against the Malaysian champions for them to advance into the ASEAN zone final by virtue of the away goals rule.

It looked as if the one-time AFC Cup winners and last season’s semifinalists will arrange a causeway zone final after they held the aggregate lead entering injury time. Yet it was not to be for the Malaysians as Fernando Rodriguez booked Ceres-Negros’ place in the zone final instead, through a marvelous penalty conversion to give Ceres-Negros a monumental victory on home soil.

Knowing that they needed to score at least more than their foes, Ceres-Negros got what they’re looking for when Kota Kawase put the Negrenses on the night and level on aggregate. The Japanese defender met Kevin Ingreso’s dead ball delivery nicely, allowing him to beat Johor’s Mohd Farizal. Prior to the breakthrough goal, the match lacked firepower as both teams banked on set pieces to test each other.

Six minutes before halftime, Ceres-Negros should have doubled their lead if not for Rodriguez missing a decent opportunity wide coming from a play that also involved Manny Ott and Bienve Marañon. It was the last dangerous moment in the first half as the Busmen from Bacolod managed to preserve a precarious one-goal lead and an away goals advantage on the tie.

Come the other side of the break, the visitors looked more dangerous with the ball. At this point, JDT needed a goal to save their campaign in the AFC Cup. The Malaysians persevered to grab an equalizer which they eventually found in the 65th minute. A clever through ball by Gonzalo Cabrera located Gabriel Guerra who raced past Super Herrera before tucking the ball into the bottom corner past the hapless Roland Müller in goal.

Time began to ran out for the Filipinos, who grew hungrier in pursuit of a crucial second goal which could just be enough to take them through past the zonal semifinal. Backed by rabid Negrense support, Ceres-Negros piled the pressure on Johor, a move that paid dividends right at the end.

Midway through the five additional minutes, Aidil Zafuan was adjudged to have fouled Rodriguez inside the box. The Spaniard calmly buried the penalty that brought joy to the home crowd. Chaos then descended after the conversion which saw Farizal sent off for violent conduct. The goalkeeper lost the plot and saw red for his unsportsmanlike behavior towards the end.

Playing with a man less, Johor almost found themselves 3-1 down but OJ Porteria’s close range goal was disallowed for offside. It mattered little in the end as the Busmen celebrated a huge victory against one of Southeast Asia’s giants.

“The players deserve it because they gave everything they had. It was not easy. We had a difficult group. All the teams are strong and good, even in the [zone] semifinals. We believe in victory from the first day. I think we deserve it,” Ceres-Negros coach Risto Vidakovic told after the match.

Ceres-Negros will be back on AFC Cup duty in August as they prepare to meet Singapore’s Home United who emerged victorious in the other zonal semifinal last night against the Philippines’ Global-Cebu.