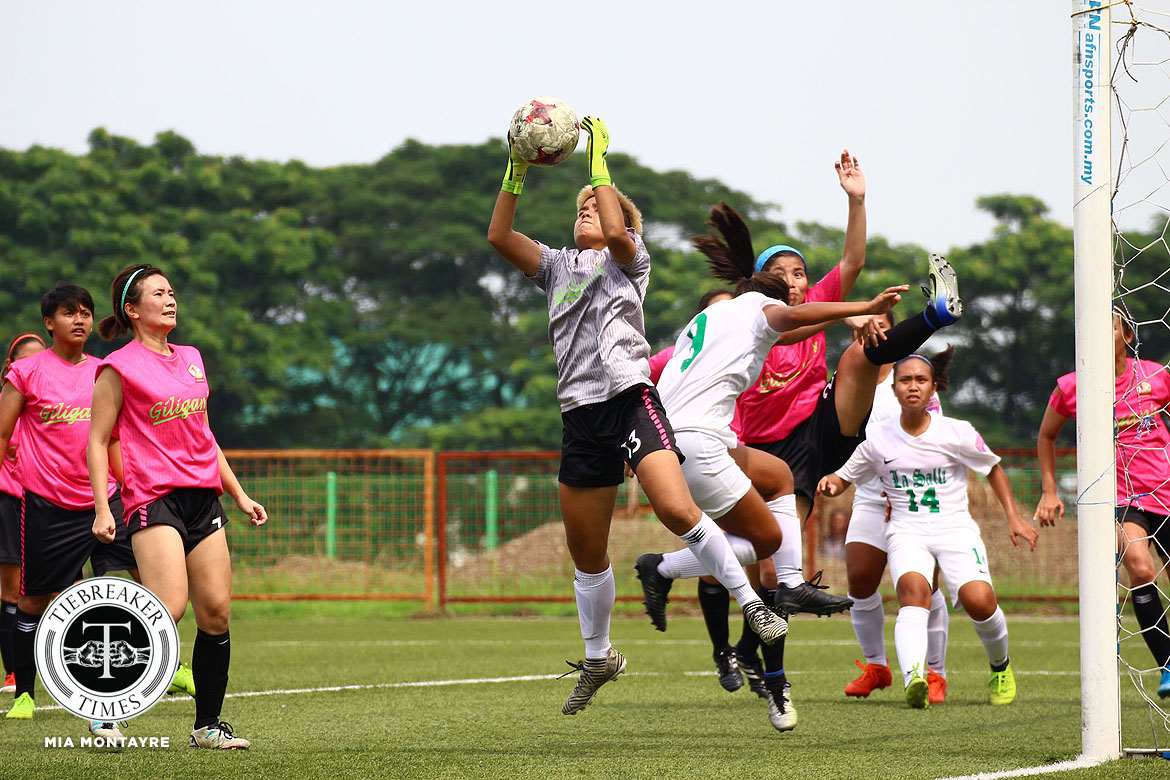 CAVITE — The past weekend of the PFF Women’s League had seen a record number of drawn matches, with University of Santo Tomas and Tigers FC the only teams walking away with three points at the Training Center.

Mangrobang equalizer tames FEU in deadlock with UP 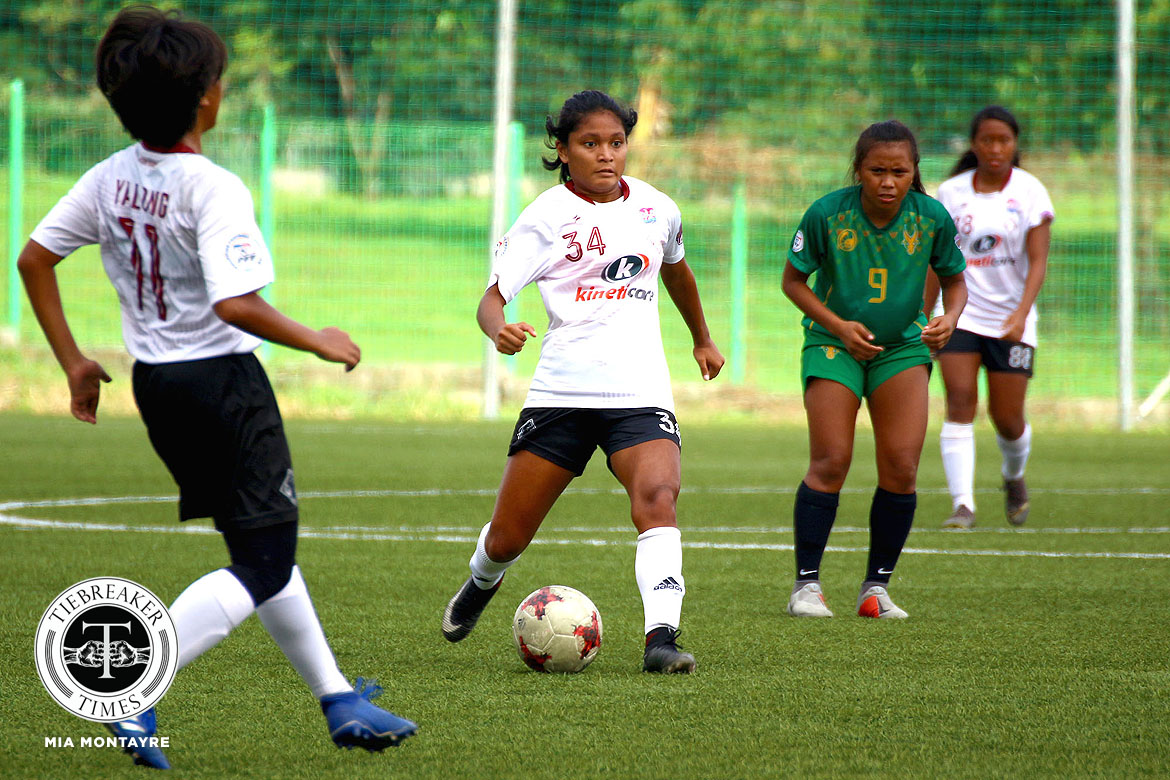 Far Eastern University has been making waves in recent weeks for blowing away opponents. Unfortunately,  the University of the Philippines had other plans when it held the Lady Tams down to a 1-1 draw.

When Vanessa Velasco scored the opening goal in the 25th minute, FEU thought it would have its way again. But Kamea Mangrobang came up with an equalizer seven minutes later.

Stunned at the response, FEU tried to counter, but its attacks fell short midway as UP became more assertive. In the end, both sides had to settle for the tie.

Meanwhile, his UP counterpart was more pleased with the outcome of the match.

“I’m actually glad about the way they played. I just only gave them three instructions — commitment when they defend, confidence when they attack, and composure [against FEU’s toughness]. Better than the previous games, more chances, more plays. May lapses lang nang kaonti, pero pwede naman siya ma-fix,” said Franco Bambico. 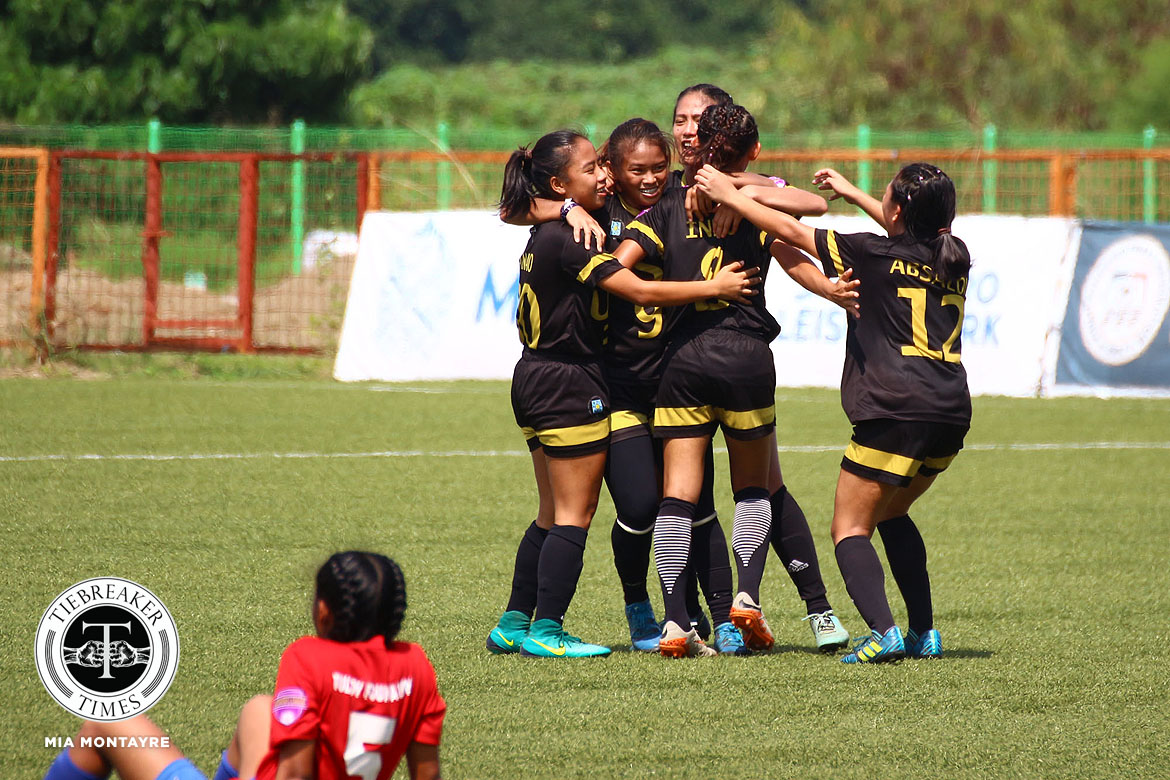 University of Santo Tomas overcame a first half deficit to defeat the eager challenge of Tuloy FC, 5-3.

Having fallen to the lower half of the standings, Tuloy FC wanted to turn its fortunes around. It then raced to an early lead with Isabella Bandoja scoring in the 37th and 40th minutes. UST knew that to minimize the chances of an upset, it had to pull the scoreline back before halftime.

Nathalie Absalon did just that in injury time.

A more alert UST showed up in the second half, with Cecile Deita netting goals in the 62nd and 79th minutes. She then responded to Bandoja’s hat-trick goal in the 80th minute to complete a hat-trick of her own, four minutes later.

Absalon shot down Tuloy’s challenge for good with another stoppage-time goal, finishing the UST comeback.

The three points ensure UST’s return to the second spot after FEU earlier managed only a point in their match. 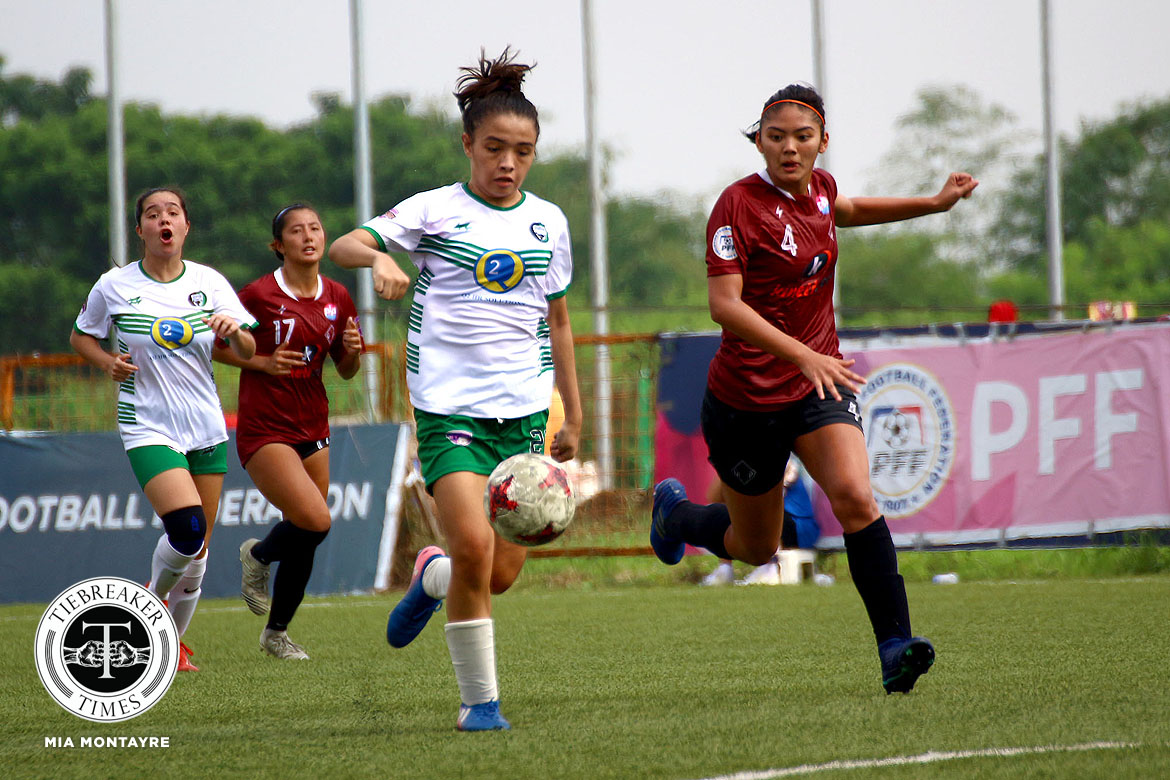 Two teams languishing near the bottom of the table sought to outdo each other. Unfortunately, both Maroons FC and Nomads FC failed to break new ground with a 0-0 result after 90 minutes.

Both teams had a fair number of opportunities to score. In the first half, Mikhaela Jumawan missed a sitter that could have gifted the Maroons their first goal in three matches. In the second half, Chloe Hails was at the top of a breakaway run only to finish poorly. More promising runs came, just as more shots were denied by either team’s compact defenses, ending the match in a stalemate.

“It’s frustrating, to be honest. How many chances did we have? And we didn’t capitalize on one of them. I told them last week, ‘If you don’t score, you’re not going to win anything’. Defensively we played very well. We kept teams out. It’s just that little bit of quality in the final third that’s missing,” admitted Nomads’ Shane Cosgrove.

Meanwhile, Steph Permanes explained that the Maroons were undergoing a transition after trading players with UP, which could account for the heavy losses at the start of the second round. Thus, the draw was a welcome relief. 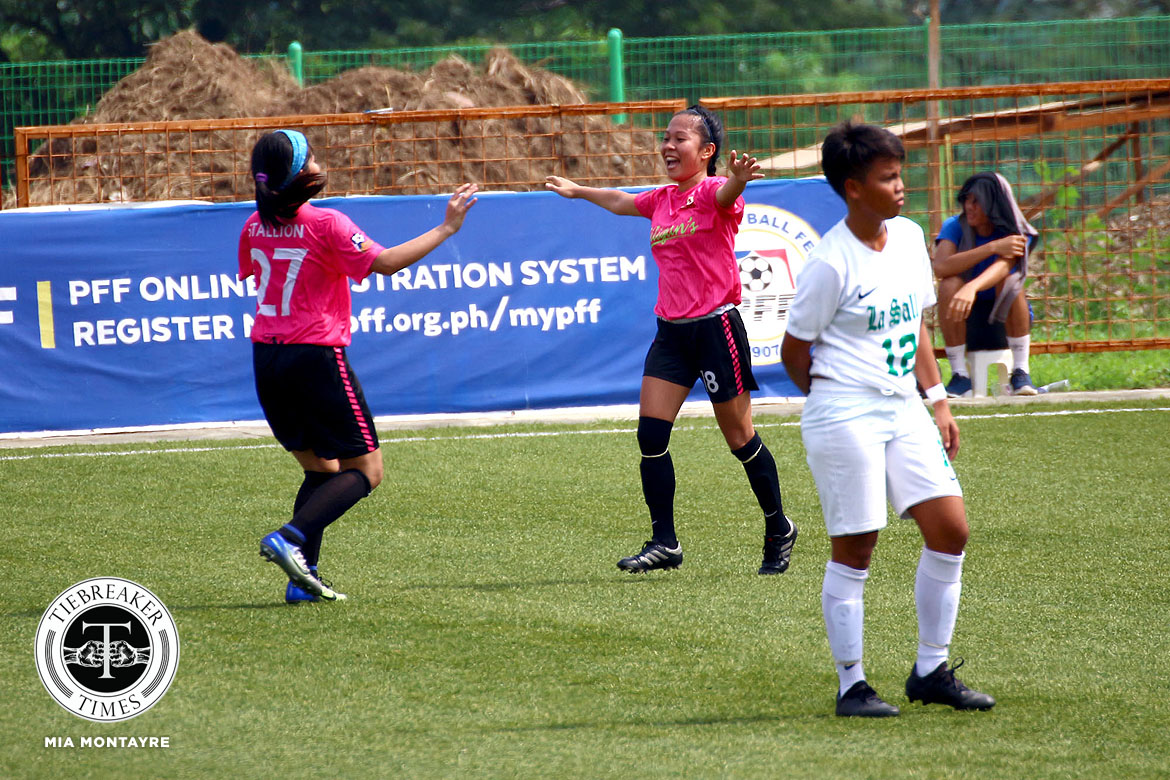 De La Salle University failed to capitalize on its advantage in numbers after Stallion-Hiraya FC had a player sent off in their heated 1-1 encounter.

Before this game, La Salle had not lost a single game in its 11 matches, a feat that has gone on for three seasons since the league’s inception. Meanwhile, Stallion-Hiraya was enjoying a streak of its own after going unbeaten for eight straight matches. The last team it lost to was its opponents for the day.

It seemed like a repeat of its  first round loss was in the works when Tenelyn Otom drew first blood for DLSU in the 14th minute. Eight minutes later, however, a well-placed free-kick by Richelle Placencia leveled the match and stunned the defending champion.

A brief staredown caused Placencia a second booking, which automatically ejected her from the game. Her absence reduced Stallion-Hiraya to ten players in the final 20 minutes.

With La Salle gaining the upper hand, most of the action then took place in Stallion-Hiraya’s half of the field. But keeper Haya Ibarra stood her ground and snatched the ball after every La Sallian opportunity.

Stallion-Hiraya parking the bus ultimately proved too much for La Salle to overcome. The match then ended in a truce that saw both teams extending their respective undefeated runs.

“At least we saw how the team will react to a game like this. It’s hard to play if lahat na kalaban mo nandoon na sa loob ng box,” added the La Salle coach, who was without his national team players and with mostly rookies at his disposal.

On the other hand, Ibarra was naturally delighted and felt the draw was a moral victory for the club comprised of former UAAP standouts.

“Games like these make us realize that this is why we’re still playing. We can go toe-to-toe with teams that still train every day despite us not having the capacity and the resources to be able to train every day. I want my teammates to be able to see that we’re capable of so much more if we pour at the same time as what those kinds of teams do. It just shows like we’re not far behind as a club team,” enthused the team captain.

Piano, Tigers too much for shorthanded GAU FC 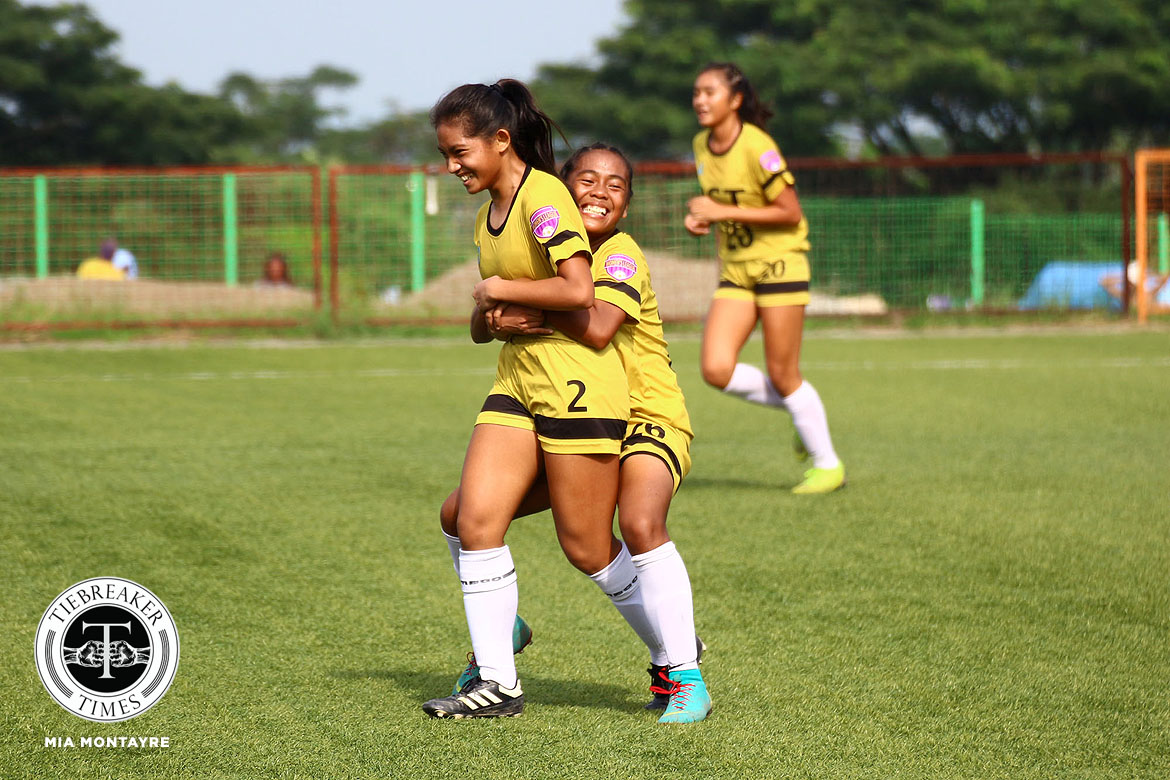 Aware of GAU FC’s poor attendance, a very eager Tigers FC came out of the blocks firing, resulting in Laure Jane Piano getting a 6th-minute goal. Ten minutes later, Lovely Fernandez was able to double it up, before Jude Mae Prado tripled it in the 28th minute.

Piano then doubled her tally before halftime, as GAU FC resolved to tighten up their defense. The only goal in the second half came from an own goal in the 72nd minute, but the damage was already done. The young Tigers ran away with their second win.

The PFF Women’s League continues on Saturday, November 16, at the PFF National Football Center, where Tigers FC looks to keep their momentum when they face Stallion-Hiraya FC at 8:00 A.M. This will be followed by Green Archers United FC and Maroons FC at 10:30 A.M.

On Sunday, November 17, the venue moves to the DLSU campus in Canlubang, Laguna and will have the University of the Philippines take on Nomads FC 8:00 A.M.; University of Santo Tomas clashing with Far Eastern University at 10:30 A.M.; and finally Tuloy FC going up against De La Salle University at 2:30 P.M.