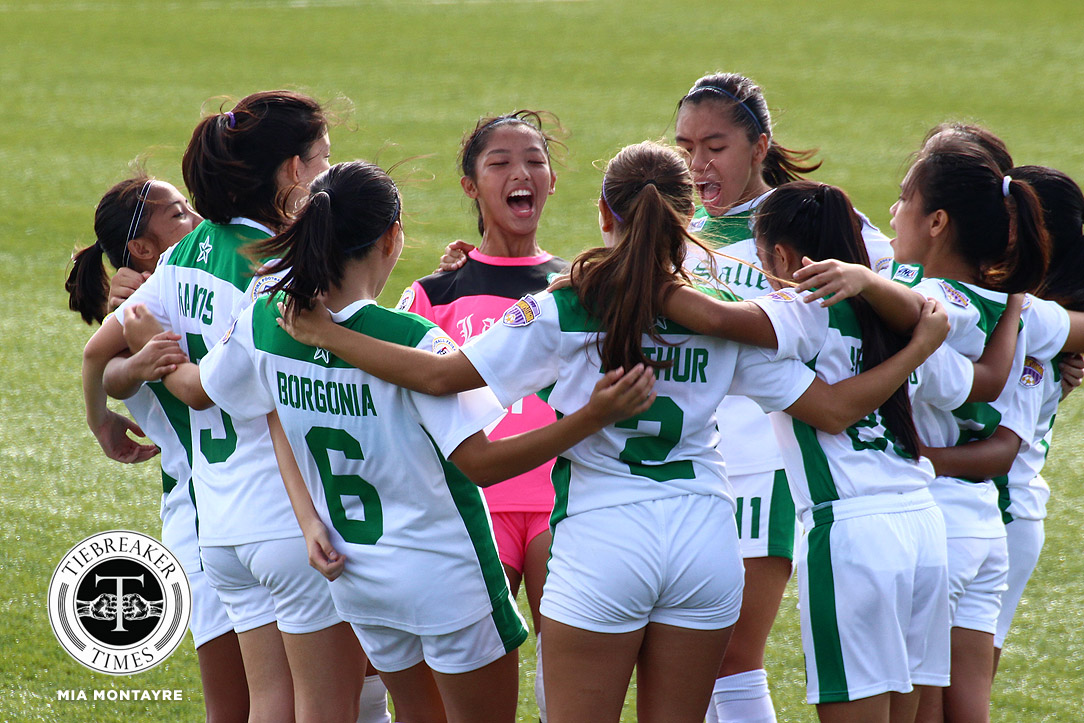 The momentum continues to flow for the University of Santo Tomas Lady Booters and OutKast FC as they each enjoy the full nine points from the season’s three matchdays with the Growling Tigresses leading by a whisker on goal difference. 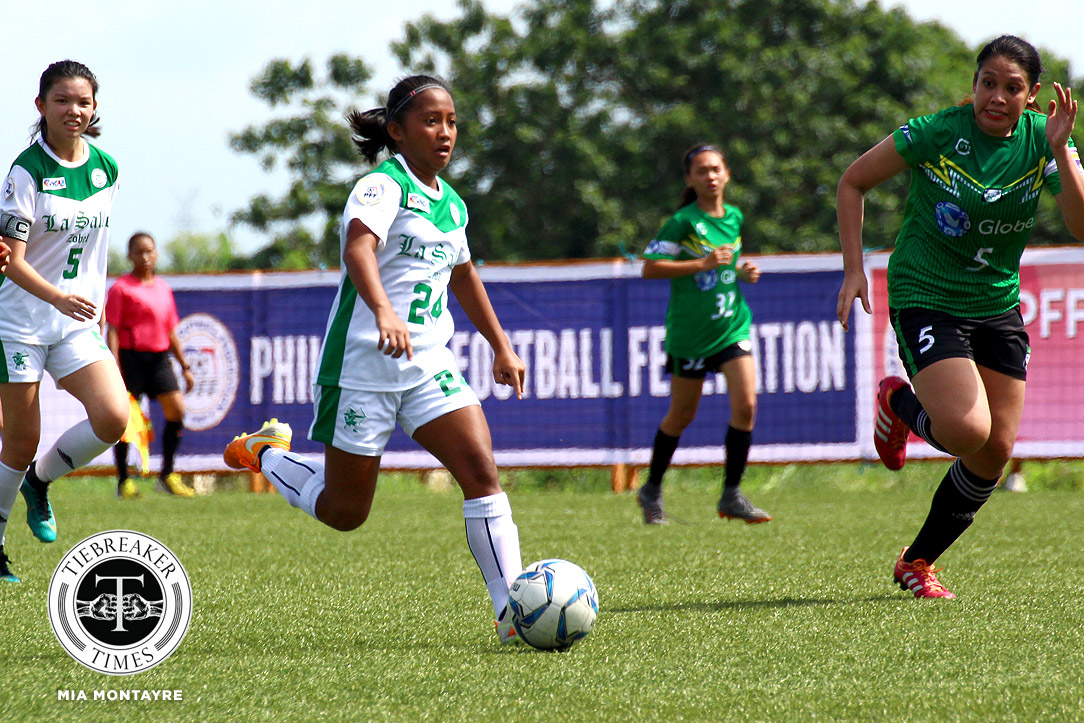 The veterans of GAU FC in particular sought for a better showing as last season’s fourth place finisher but surprisingly, it was the juniors of Zobel who came out on top of the southern La Salle derby prevailing 2-1.

Zobel scored first after Marinelle Cristobal’s persistence to keep the ball in their possession paid off in the 19th minute. Cristobal danced around defenders in the penalty area before letting loose a right-footed strike that one-upped Inna Palacios.

GAU naturally rallied for a comeback but Raquel Almeda who had been bludgeoned hard in the previous two matches withstood the test.

In the 51st minute, Cristobal gave Zobel the cushion they needed after a dizzying run from the centerline placed her on one-on-one with Palacios. Refusing to be intimidated, Cristobal slotted in a shot that outpaced the national team keeper to put her side up by a deuce.

Though stunned at the turn of events, GAU did not sit idly by as Nicole Andaya went on a wild run of her own in the 61st minute starting from their own half before powering in a shot that blew past substitute keeper Darryle Tangco. It would be their only goal, however, as the win vaulted Zobel from the bottom of the table to sixth.

For Annalie Martinez, the former GAU FC scorer now turned coach for Zobel, it would be a bittersweet affair but she remained proud of her young squad. 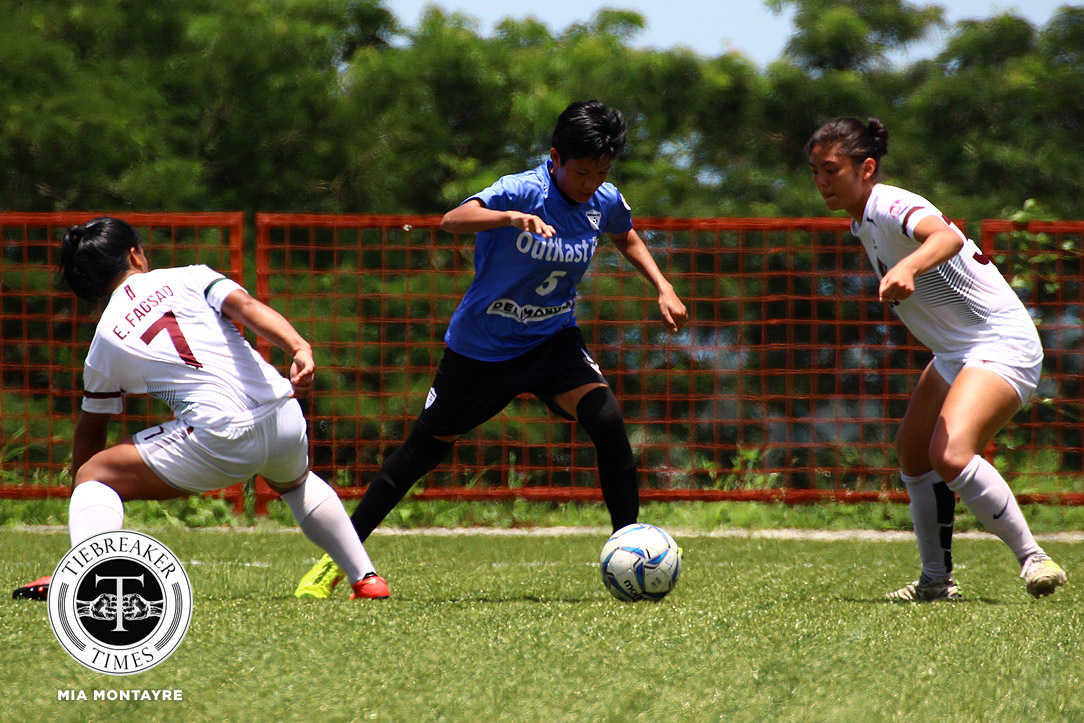 The University of the Philippines Lady Maroons were seeking for their first points only to be denied by OutKast FC’s fantastic form as the club team refused to let go of the top of the standings by beating their second UAAP opponents, 4-1.

Dai Dolino raced to the scoreboard first with a wicked curling shot from the top of the box in the 9th minute that stunned their collegiate counterparts. But the Lady Maroons fought hard to level terms thanks to Abigail Corvera’s cross that turned into a strike in the 41st minute.

OutKast did not give them room to breathe however, as Barbie Sobredo hammered a blocked shot home for the go-ahead in first half stoppage.

Unluckily for UP, OutKast did not relent in the second half as well as it turned into the Jennizel Cabalan show. Krit Sabanal played a good cross in the 58th minute putting the ball directly into an onrushing Cabalan’s path who finished with ease despite her markers.

UP’s only consolation was through Vanessa Estrada saving Poiret’s penalty kick which kept the scoreline as is, yet OutKast got what they already needed.

“Of course, I’m very happy with their performance. So meron na kaming three-win standing,” said an enthused Jo Loren who heaped praise on her players. 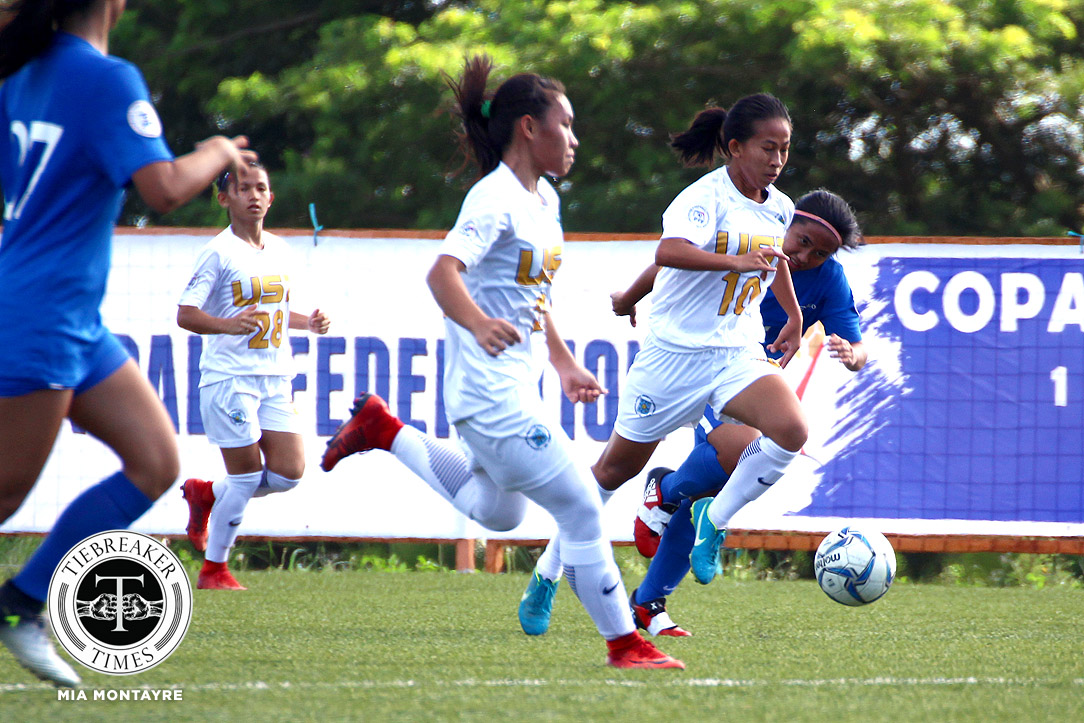 As their first fellow collegiate opponents of the season, Ateneo made it difficult for UST to get into the groove, troubling the league-leaders for most of the first half. The Lady Eagles almost led proceedings too until it was waved off for offside.

#ReadMore  Mark Cruz eager to make it back to the pros

But the ladies from Espanya found a way to break through their Katipunan-based counterparts’s gritty defense as Shelah Mae Cadag opened scoring for UST yet again for the third straight match. Moira Lim had been impeccable in goal until Cadag’s flanking run found a way past her in the 41st minute.

As if this broke her resolve, MJ Indac scored in almost the same manner slipping the ball past Lim towards the far post in the 71st minute.

Charisa Lemoran added the icing on the cake for the Growling Tigresses when she turned a blocked pass into a curler far out of Lim’s reach at near full time.

Aging Rubio sounded relieved at the win before revealing pre-game issues that could have caused the first half struggles. 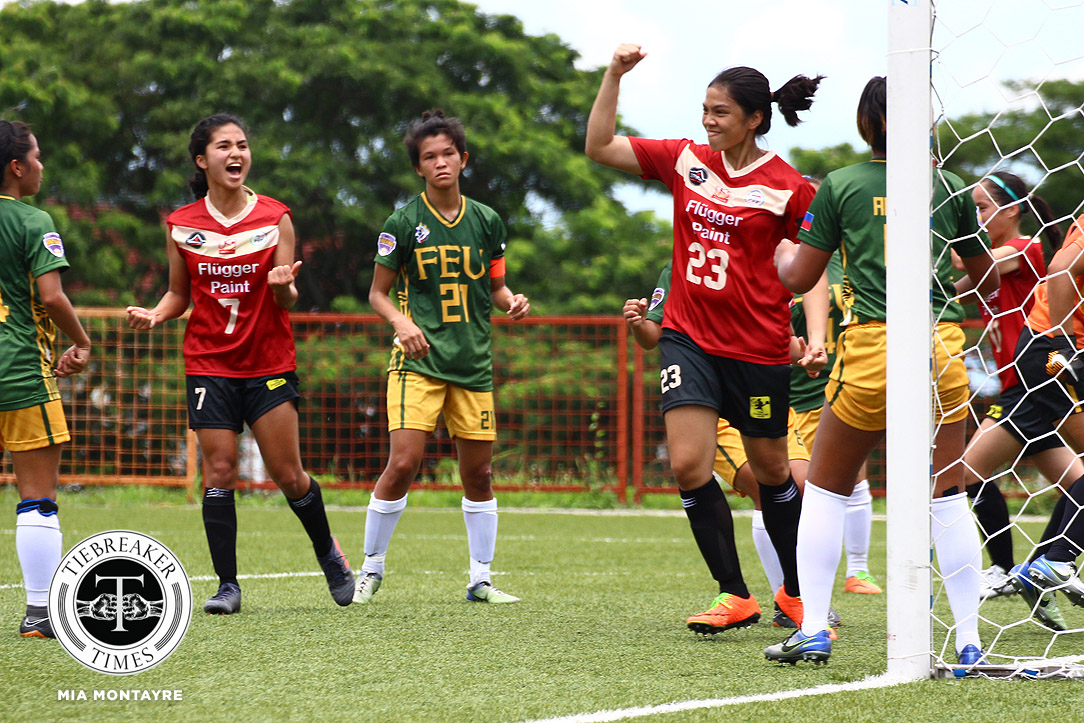 The Far Eastern University Lady Tamaraws were looking to recover from the previous loss to club OutKast FC only to be blindsided by yet another club team in Hiraya FC as the game ended in a 1-all draw.

As if the stress of last week’s loss still lingered over their heads, FEU were forcing matters yet again as they struggled to get into scoring position despite holding possession for most of the match.

A hand ball in the box seemed to turn the tide into their favor but Suettie Simoy’s spot kick was denied by Haya Ibarra’s quick feet and gloves.

Ibarra would not be so lucky a short while later during a corner situation. She already had a hand on the ball only for it to spill into Sophia Dagaraga’s feet who merely tapped it in for a 30th minute goal.

Just as FEU were breathing a collective sigh of relief relaxing from that point forward, a corner situation in their half of the field in the 73rd minute ended with a point blank strike from substitute Marie Cadayona, drawing both teams level yet again.

#ReadMore  Jhazmin Joson, Joanne Nimes step up as Ateneo grinds out win over UP

This rattled the Lady Tamaraws as momentum shifted to Hiraya’s side with wave after wave of attack. Cam Rodriguez had very good chances to give the club team the lead and virtually the win but fluffed her shots. In the end, both sides had to share a point each as the match ended 1-1.

“Our main objective was to at least get one point kasi if we want to reach our objectives for this season, diba we have to be realistic of what we want to achieve, so one point was our target. Towards the end akala namin kaya pa [to win] but the draw was really our goal,” he said.

His counterpart on FEU on the other hand, was not as pleased.

“Very disappointing, especially since we are playing against a club team. This is the second club team na nahirapan kami,” Let Dimzon lamented.

“It’s still the same problem from the previous games even from last UAAP. Although nakakaatake kami, the problem is still in front of the goal and [nawawalan ng] composure so hindi natatapos,” she added before comparing her team’s performance to UST’s success. “Makikita mo lahat ng bola binabalik nila lagi sa midfield so hindi kami nakakatapos ng attack like others like UST. The way they attack is continuously moving forward so ayun yung nagkukulang sa amin.”

The PFF Women’s League continues on Saturday, September 15 at the PFF National Training Centre in Carmona, Cavite where the De La Salle University kick off against the University of the Philippines at 8:00 A.M. Afterwards, Green Archers United FC attempt to bag a win against fellow club team Tuloy FC at 10:30 A.M.