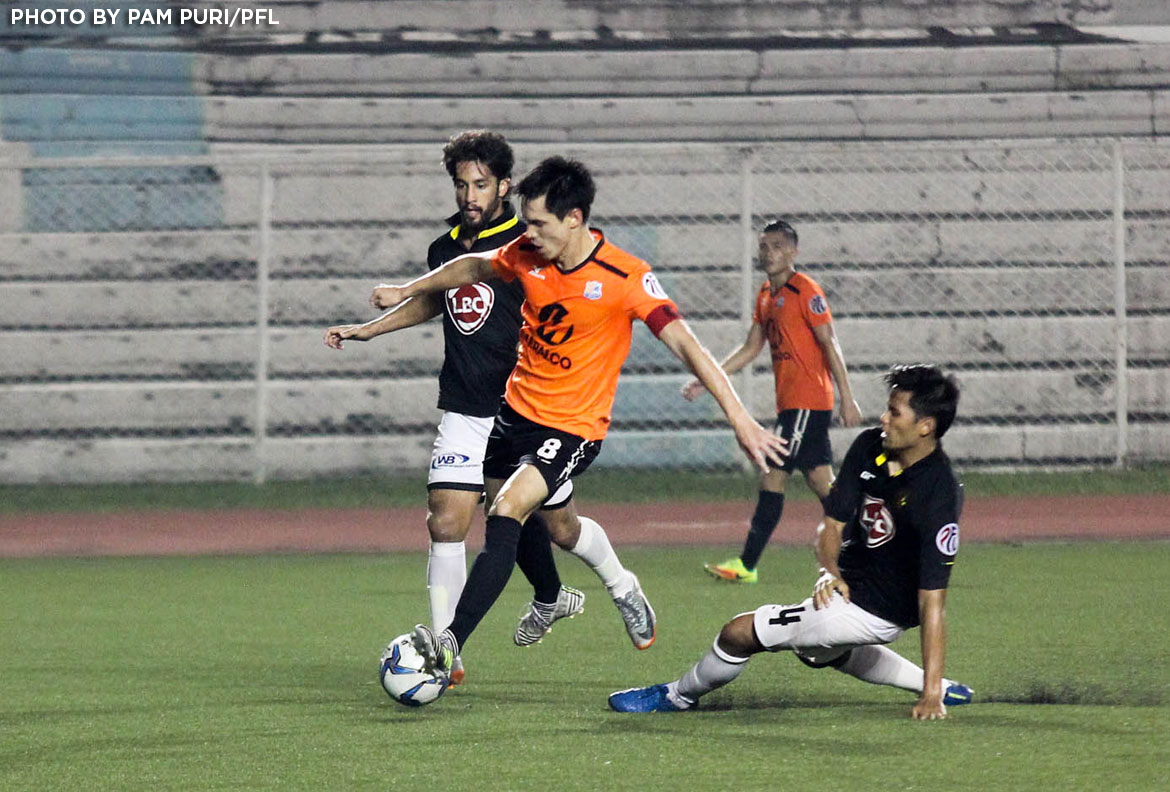 Another weekend meant another set of football action in the country’s premier football competition, the Philippines Football League.

All eight teams saw action, with a derby in the capital kicking things off. Elsewhere, Ceres and Global returned home with the aim of bouncing back from disappointing defeats. And while already out of contention, both Stallion and Davao sought to finish the inaugural PFL season strong when they prepared to face each other in Mindanao.

A connection all too familiar to UAAP fans — particularly those of the UP men’s football team — spelled the difference between the Meralco-Manila Sparks and Kaya-Makati FC. The men coached by Aris Caslib banked on Jinggoy Valmayor’s effort in second half added time to deal Noel Marcaida’s men a heartbreaking 1-0 defeat in a heated affair, Saturday evening at the Rizal Memorial Stadium.

“It was a tough match, but then the players stepped up. We were fortunate to have good substitutions in the end,” Sparks coach Caslib stated after the game. His adjustments made a positive impact late in the game, but the former national team coach also had a strong game plan. The Sparks controlled the passage of play in the first half as they kept former Meralco keeper Ref Cuaresma busy.

The Kaya goalkeeper had to fend off multiple attempts by the hosts. All of his stops looked routine, signifying his prowess in between the sticks. A brilliant effort from Tahj Minniecon six minutes into the match was perhaps the most challenging save he made. He had to stretch a few more muscles to gather the Australian’s attempt.

As the game went on, Kaya struggled to match their opponents’ intensity, as they had come off a midweek trip to Davao midweek, unlike their opponents whose last activity was two weeks ago. Nevertheless, the boys in black were doing well to hold off Meralco’s attacks.

The second half offered plenty of time for both teams to regroup, and the back-and-forth nature of the proceedings showed. Not willing to give another the edge, neither team let up defensively. No wonder that chances came few and far in between, with Daniel Gadia and Robert Lopez Mendy unable to find the target for their respective sides.

As a cagey affair ensued, tempers caught up with some of the players. Miguel Tanton received a straight red card in the 70th minute following a rash challenge on Gadia. While it was a huge setback, Kaya managed to frustrate Meralco’s frontline. The Sparks were not able to make the extra man count, and eventually saw the numerical advantage disappear when Milan Nikolic was booked for the second time in the game.

As the game became more open, the Fighting Maroon duo of Gadia and Valmayor linked up once again. Reminiscent of their days with UP, the midfielder did well to shrug off defenders before locating the tall striker, who came on in lieu of Connor Tacagni midway through the second half.

There was only little time remaining, but Kaya threatened late after going a goal down. A cheeky attempt by Jordan Mintah nearly rescued his team a point if not for Joaco Canas’ heroic clearance at the other end. The Spaniard’s goal line clearance preserved the lead for good to earn the Sparks a valuable victory against their crosstown rivals.

Davao Aguilas prevented a home defeat by scoring two second half goals against Stallion-Laguna, as the two teams shared the spoils in a 2-2 draw, Sunday afternoon at the Rizal Memorial Stadium.

The visitors on paper got off to a hot start, taking less than two minutes to open the scoring courtesy of Yannick Tuason. The quick strike came as a huge blow for the Aguilas, who had yet to settle before going down. It became worse before it got better for Marlon Maro’s boys 15 minutes later, when Fitch Arboleda padded the advantage with an amazing volley.

Left with an awful lot to do, Davao drew on the strength of the few Davao fans who made the Manila facility feel like home as they lease the home venue of the Sparks. Brad McDonald got what they were looking for by pulling one back early in the second half. The Australian weaved his way past the Stallion defense in order to finish sublimely from the left side of the box.

Seizing momentum, Davao smelled blood. They maintained an energetic approach in their pursuit of an equalizing goal, which came eight minutes before time. Another Australian, Harrison Sawyer, did the damage when he was in the right place at the right time to smash a loose ball into the back of the net.

The turnaround would have been completed had it not been for Benito Rosalia’s wonderful save to deny Phil Younghusband a potential winning goal late in the game. In the end, the scores stayed level — perhaps a fair one, as it turned out to be a game of two halves. The result also meant that both teams are effectively no longer in the running for playoff spots.

Global dodged the upset axe mainly thanks to Wesley Dos Santos’ goal, as they saw off Ilocos United in a 3-2 thriller at the fortress of a venue in the Cebu City Sports Complex, Sunday evening.

The visitors shocked the team chasing a spot in the playoffs when Arthur Kouassi gave the Ilocanos the lead after 19 minutes. Thankfully for the hosts, they were able to respond swiftly through Darryl Roberts. The Trinidad and Tobago man grabbed the equalizer off a quick play just moments after the restart.

Gaining ground, the Cebuanos laboured to take the lead before halftime, and did so once again through Roberts. Yet the Ilocanos and Kouassi returned the favor, as they immediately answered to restore parity at the break.

If the first half had plenty of goals, the second half had only one. It came at the latter part of the half, which succeeded a cagey opening 30-minute period. Global had more of the ball but Ilocos produced a more dangerous chance through Chima Uzoka. Against the run of play, the striker came agonizingly close to retaking the lead for his side.

Towards the end, Global made their dominance in possession count, as an attacking barrage led to a goal by dos Santos. The Brazilian got on the end of a play initiated by Yu Hoshide to bring Global ahead with only minutes to spare. This time around, they held on for good and may have even widened the margin if not for Baba Sampana’s presence.

The result brought Global two points away from sealing a place in the final series, but the last United Football League champions won’t just push for a berth in the playoffs, as they look to overtake Kaya and maybe even Ceres to improve their rankings.

Ceres-Negros dealt JPV-Marikina a 5-0 thrashing, as the Negrenses emphatically returned to winning ways — and not just in the PFL, as they have also arrested a slump against their opponents in Saturday afternoon’s clash at the Panaad Stadium.

It had been more than a year since the last time Ceres defeated JPV, and the hosts waited to play the swashbuckling club from Marikina in their own backyard. Staging their first-ever match in front of the fabled Panaad crowd, Risto Vidakovic’s team took advantage of the seemingly overwhelmed team managed by Dan Padernal.

Coming off a midweek loss against Stallion, the Busmen wasted no time to rebound from the setback. A three-goal haul in the first seven minutes of the encounter took the visitors out of the contest almost entirely. Unsurprisingly, Fernando Rodriguez was among the goals alongside Fil-Australian Iain Ramsay.

Rodriguez linked up well with OJ Porteria, whilst his compatriot was fed by a brilliant Stephan Schröck pass. Ramsay’s alertness led to the third goal, as he mercilessly took advantage of a foiled clearance.

JPV attempted to get themselves back in the game through decent tries on goal by Kouichi Belgira and Takumi Uesato. Both made the Ceres defense work, but also acknowledged that they needed to do better to have salvaged a result. At the break, JPV managed to limit the damage to three. After the interval, however, the visiting team fell once more to a fast start by their opponents.

Porteria slotted home the fourth in the 49th minute off a rebound from a saved Schröck shot. JPV then briefly silenced the Ceres attack, before a Marañon goal in the 80th minute capped off the 5-0 mauling. The win not only guarantees Ceres a spot in the final series, as it also puts them in a good position to claim one of the top two seeds. Six points behind the league-leading Sparks, the Busmen look to maximize their three games in hand to secure top spot at the end of eliminations.