The Philippines Women’s National Football Team (PWNFT) could be on the cusp of history when it plunges into action in the 2022 Asian Football Confederation (AFC) Women’s Asian Cup which will be held in India beginning Thursday, January 20, until February 6.

Five slots are up for grabs to the 2023 FIFA Women’s World Cup co-hosted by Australia and New Zealand which have both automatically qualified for the quadrennial event.

Experts are in agreement that Japan, China, and South Korea are a lock for three of the five World Cup berths.

Japan, the defending AFC Women’s Asian Cup champion, is 13th in the world and recently made the quarterfinals of the Tokyo Olympics. In the 2019 FIFA Women’s World Cup, Japan advanced to the Round of 16 where it was beaten on a 90th-minute penalty conversion by eventual finalist the Netherlands, 1-2.

South Korea, ranked 18th in the world, has made the last two editions of the World Cup.

To earn one of the two remaining slots, the Philippines needs to outperform the next highest-ranked Asian teams – Vietnam (32nd), Thailand (38th), and Chinese Taipei (39th), three teams the Philippines has never beaten.

But there is a basis for the Philippines to like its chances. In the 2018 AFC Women’s Asian Cup, the PWNFT was a win away from qualiffying for the World Cup. The Filipinas lost the battle for 5th to South Korea, 0-5.

Midlife Halftime takes a look at the composition of the Philippine team and the teams it will be facing in Group B action.

The Philippines parades a well-prepared and one of its strongest ever national teams after pitching camp in the United States starting November.

The squad will be mentored by Alen Stajcic who coached Australia in the 2015 World Cup and the 2016 Olympics. He also led Australia to its highest ever world ranking of 5th.

The Philippines will be bringing in its big guns to India.

Two of the goal scorers from the Asian Cup qualifiers last September banner the lineup. These are skipper Tahnai Annis, who has seen action in the UEFA Women’s Champion’s League for the Icelandic club Þór/KA, and Chandler McDaniel, who played US NCAA Division I football for the Milwaukee Panthers.

Three of the PWNFT’s most prolific offensive weapons are back. Eva Madarang of the CD Pozoalbense in Spain’s Segunda División Pro and Japan WE League’s Sarina Bolden of Chifure AS Elfen Saitama and Quinley Quezada of the JEF United Chiba make their reappearance after their last stint in the 2019 SEA Games where all of them scored for the Philippines.

Control of the midfield will be crucial to the team’s buildup to launch its counterattack. Veterans Cam Rodriguez and Sara Castañeda along with another returnee, Jessica Miclat of the Aris Limassol in Cyprus, will be providing stability and leadership in the midfield.

Two new faces are expected to make an immediate impact.

These are Katrina Guillou who plays for Piteå IFn in the Damallsvenskan, Sweden’s top division women’s league, and Dominique Randle, a former All Pac-12 3rd team selection for the South Carolina Gamecocks.

The top two in each of the three groups and the two highest-ranked third placers will proceed to the quarterfinals. The key for the Philippines will be to win its opening match over Thailand or at the very least, eke out a draw to have a chance to advance to the final eight. An upset over Thailand will most likely mean a second-place finish for the Philippines in Group B and a quarterfinals encounter with the second placer from Group A which could either be Chinese Taipei or host India. Thailand qualified for the 2019 FIFA World Cup by finishing fourth in the 2018 AFC Women’s Asian Cup.

It dropped its semifinal match against Australia only on penalties. In the same competition, Thailand soundly defeated the Philippines, 3-1. The most recent encounter between Thailand and the Philippines was in the 2019 AFF Women’s Championship. Quezada scored a brace for the Philippines but it was still not enough as Thailand prevailed, 4-2.

The Thai squad will be armed to the teeth for this year’s Asian Cup.

Leading the charge for coach Miyo Okamoto is team captain Silawan Intamee who scored in their last two wins over the Philippines.

Thailand will have plenty of choices up front such as Kanyanat Chetthabutr, who was Thailand’s top scorer in the 2019 SEA Games when she was just 20 years old, Taneekarn Dangda of Chonburi who previously played for Swedish club Östersunds DFF, and Thai-American Miranda Nild of Swedish top division club Kristianstads.

One distinct advantage Thailand has over other Southeast Asian nations is the existence of the Thai professional league system where most of its national team players see action. Nine players in its current roster belong to the club BG Bundit Asia, while 5 national team mainstays are part of Chonburi FC. 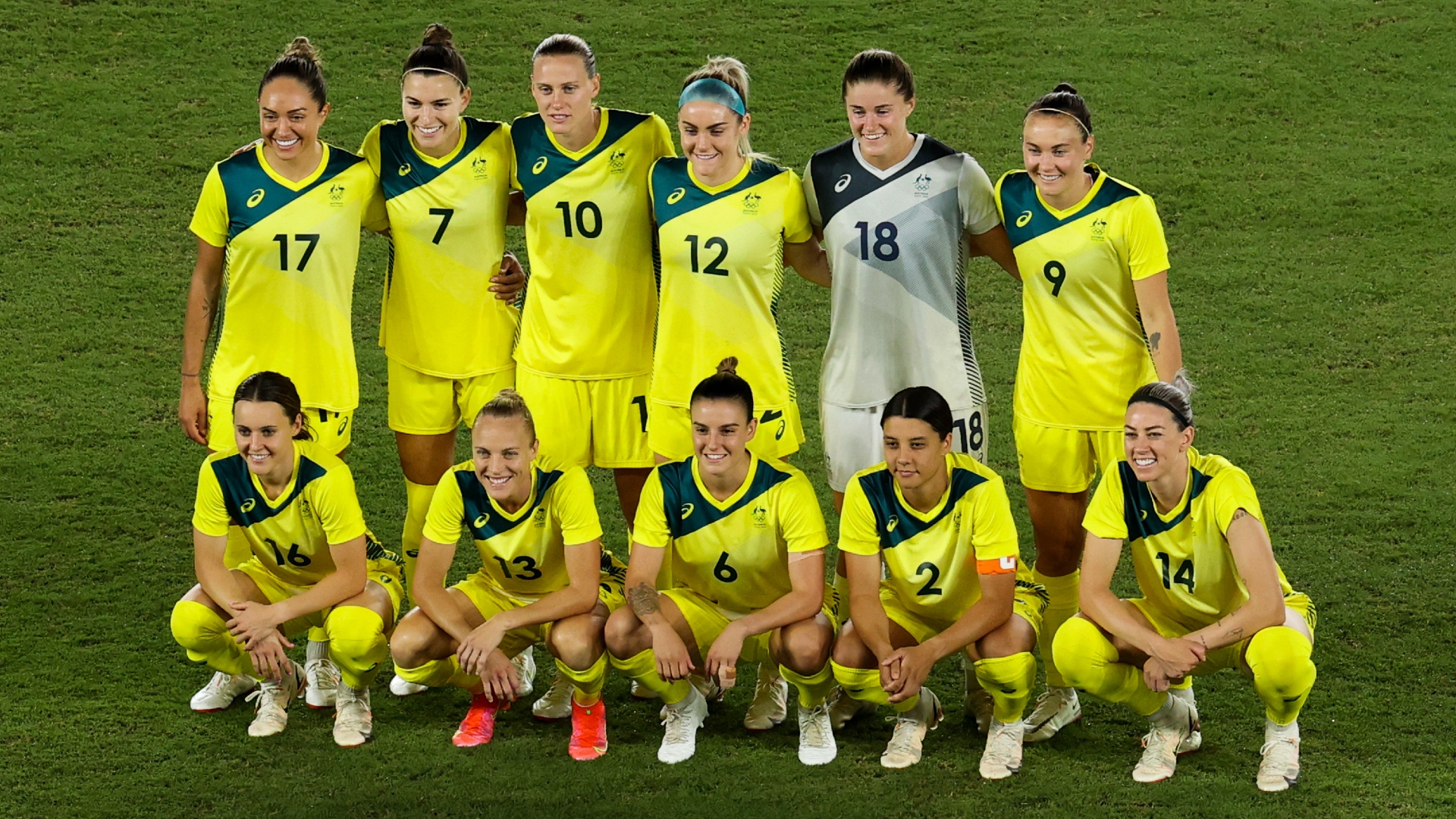 The Matildas’ objectives go beyond the group stage of the 2022 AFC Women’s Asian Cup. Coach Tony Gustavsson wants to use the tournament to jumpstart preparations for next year’s World Cup.

Australia also wants payback against Japan which won over them in the finals of the 2018 AFC Women’s Asian Cup.

Australia made the semifinals of the Tokyo Olympics where it lost the battle for the bronze to the US. In the 2019 World Cup, the team beat Brazil and Jamaica in the group stage to advance to the Round of 16 where it lost to Norway on penalties.

In both the Tokyo Olympics and the 2019 World Cup, Australia relied on the wizardry of captain Sam Kerr who emerged as one of the leading scorers of both tournaments. Kerr, largely considered one of the best strikers in the world, plays club football for Chelsea in Football Association Women’s Super League (FA WSL), the highest women’s league in England.

Joining Kerr in spearheading Australis’s attacks could either be Arsenal’s Caitlin Foord or Tottenham Hotspur’s Kyah Simon who between them have over 200 international appearances.

Kerr, Foord, and Simon are not the only ones with European football league experience among the Matildas. Fourteen other players are signed to various professional clubs across Europe. These include their three goalkeepers – Lydia Williams of Arsenal, Mackenzie Arnold of Tottenham Hotspur, and Teagan Micah of Swedish club FC Rosengård.

One player to look out for is Mary Fowler, who at just 18 years old is already a regular starter for Montpelier in the French Ligue 1. Fowler was named last year to ESPN’s 21 under 21, an international list of footballers representing the next generation of talent. Regardless of the results of its games against Thailand and Australia, the Philippines still needs to win big against Indonesia.

Muzdalifah will be at the forefront of Indonesia’s campaign in this year’s Asian Cup. In the 2018 Asian Games in Jakarta, the then 17-year-old Muzdalifah was named team captain of the Indonesian women’s football team.

Ade Mustikiana, who plays for the Asprov Bangka Belitung in the Liga 1 Putri, Indonesia’s top-flight women’s league, has been named skipper of this year’s Indonesian squad. 22 out of the 23 players lined up by Indonesia are fixtures in their domestic professional football league.

Fourteen Indonesians who will see action in India are aged 22 and below. Eight are teenagers.

The most exciting prospect among them is Shalika Aurelia, an 18-year-old center-back who just this January joined Italian Serie B club Roma CF. Aurelia became the first Indonesian women’s football player to be signed by a foreign club.