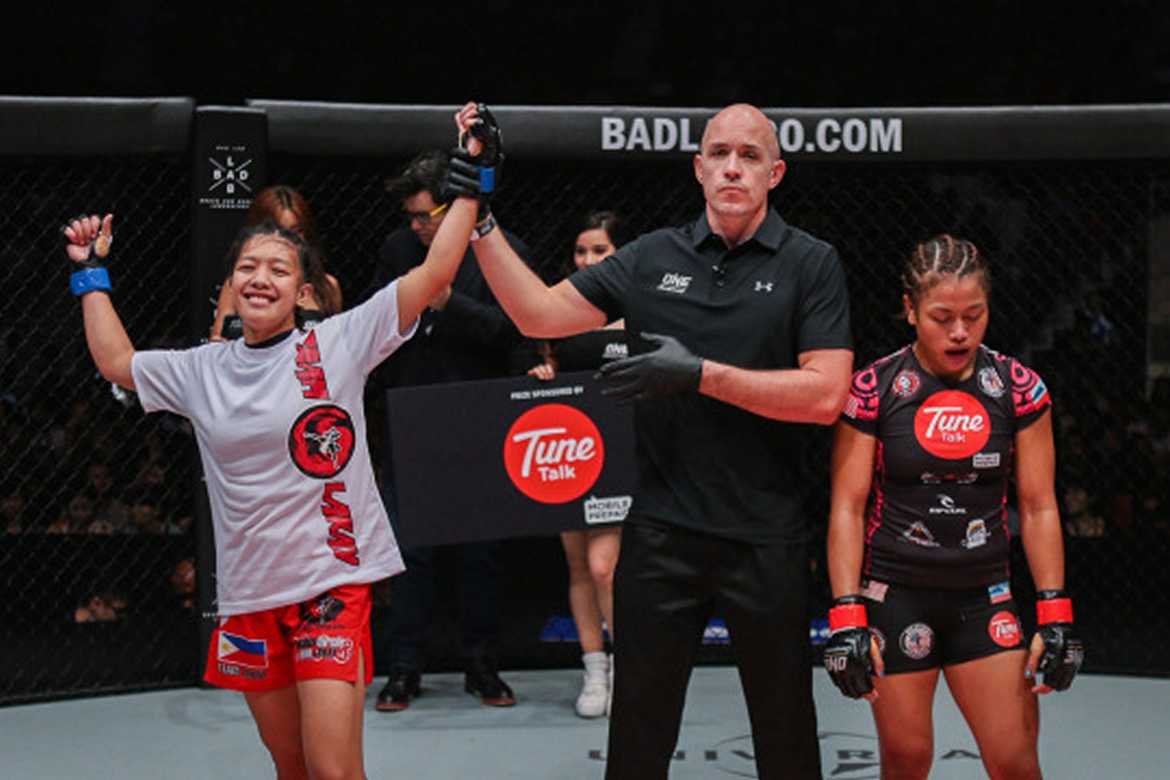 So far, 2016 has been spectacular for Filipino fight fans and its fighters.

The Filipino contingent for ONE Championship: Unbreakable Warriors held at the Stadium Negara in Kuala Lumpur, Malaysia was another stunning night as Team Lakay’s April Osenio shocked the world while Rene Catalan finally broke out of his cold spell.

After a brief period where Osenio showed off her world-class wushu skills standing, it was Osman who got the first takedown off a second attempt.

However, “Athena” was unable to really dominate her opponents like she has in her previous ONE fights. The Baguio-native almost locked in a deep armbar off that takedown before reversing and displaying her strong ground kills.

As the two strawweight competitors spent much of the round reversing position and trading blows and submission attempts, it was the Malaysian who got the jump on a guillotine choke. As she adjusted and tightened the grip, there was nothing that Osman could do but tap and end the fight with 51 ticks remaining in the round.

Osenio improved to 2-1 with the win, which was her second victory in ONE with both coming via submission and inside of the first round. For Osman, the loss dropped her to 4-3 overall.

You heard that right! Rene Catalan finally won a bout in ONE Championship!

Truthfully, this strawweight fight was all Catalan. Catalan, a multi-time Wushu World Champion, displayed his striking prowess early with a slew of fierce leg kicks. Soon, he took the former Tian Xu Kung-Fu Champion to the ground, working both his punches and an armbar submission.

Though Liang tried working more of his combinations in the second round, Catalan countered with a repeat performance of crisp kicks and a takedown. The Filipino maintained a dominant position for most of the stanza and came close to securing a rear naked choke.

But once he realized it wasn’t locked in, he abandoned that strategy and kept landing hard strikes on the Chinese fighter, who was literally saved by the bell.

The third round proved to be much more methodical, as Liang threw some well-timed leg kicks and body hooks. Catalan, however, retaliated with another dose of his wushu-style kicks and another takedown, where he continued to dominate the position game and pound the body until the round concluded.

From beginning to end, Catalan was always in control.

With this victory, the Manila, Philippines native broke his losing streak, and improved to 1-2. Liang, meanwhile, drops to 1-3.

https://www.youtube.com/watch?v=wYEAqZUOq3I
Agilan “The Alligator” Thani gave his hometown something to cheer about. In front of a packed house at Kuala Lumpur’s Stadium Negara, the former MIMMA Welterweight Champion submitted battle-tested veteran, Trestle “Jun Minion” Tan, via rear naked choke at the 2:24 mark of the first round.

Thani was absolutely relentless in his attack. Then again, that’s a distinct characteristic of every “Alligator”.

After taking a brief moment to establish range, Thani displayed his improved striking and grappling skills in a flash. The 21-year-old Monarchy MMA product, who has been cross-training at Team Quest in the US and Tiger Muay Thai in Phuket, Thailand, delivered a few punches on his way to a body lock.

Tan knew he was going for the takedown. Though the Vietnam-based Filipino adjusted his body and maintained impeccable balance, Thani eventually tossed him to the ground. From there, the unbeaten Malaysian sensation passed into half guard, and then full mount before starting to rain down punches until Tan gave up his back. That allowed the “Alligator” to sink in his hooks, flatten his opponent out, and slide in a fight-ending rear-naked choke.

The hometown hero moves his record to a spotless 6-0 and keeps his reputation for finishing fights in tact. Tan, meanwhile, drops to 4-6.