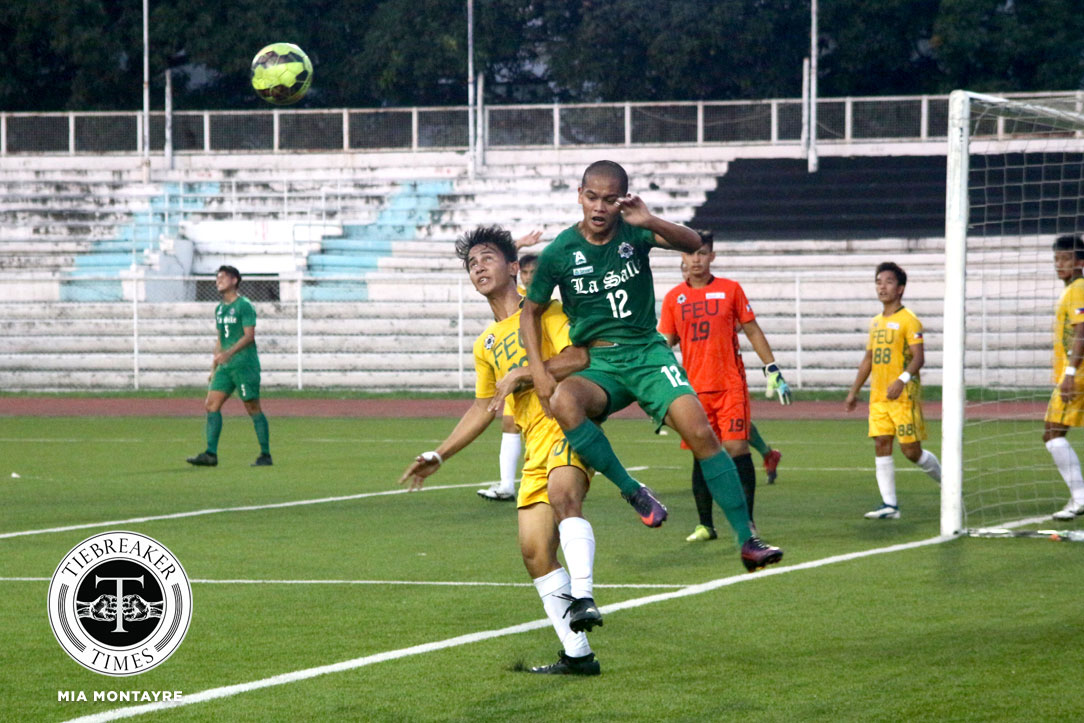 The De La Salle Green Archers and Far Eastern University Tamaraws split the spoils in an entertaining 1-1 draw tonight at the Rizal Memorial Stadium in Manila.

FEU opened the scoring via Alex Rayos (34′), while La Salle answered back with Rafael Siggaoat (52′). With the draw, both schools’ hopes of climbing up the UAAP Season 79 Men’s Football Tournament table take a blow.

La Salle coach Hans-Peter Smit commented, “Officials can make or break a game. This is too much already!” In addition to that, Smit praised his players for the result. Smit shared, “I’m proud of my boys. They showed more heart. We’re playing better than the first round. No matter who we put in from the bench they still performed.”

Both teams looked to put goals past each other as soon as the game started. Good attacking football was on display for those who watched tonight at the Rizal Memorial Stadium, but it was FEU who had the end product.

The Tamaraws were aggrieved and perhaps unlucky to not have been awarded a penalty when referee Ricardo Dela Cruz waived play on after Green Archers defender Nicko Villacin tackled Nicholas Ferrer in the La Salle box.

La Salle then pounded the FEU goal. Third-year midfielder Yoshiharu Koizumi orchestrated the Green Archers offense and provided passes that broke the Tamaraws defense. La Salle should have put the ball in the back of the net via Koizumi’s passes, but Nace Gonzales and Marcus Garcia shot straight at FEU goalie Ray Joyel.

A goal was coming in the period, and it was the Morayta school that drew first blood. A goalkeeping error from Paeng De Guzman forced La Salle’s defense to scramble back, only for FEU’s Rayos to turn in the ball in the 34th minute and give the Tamaraws the lead at halftime.

Nevertheless, La Salle leveled the scores just seven minutes after the break. Garcia shot wide again and in the next sequence of play, the Green Archers equalized in the 52nd minute, when Siggaoat headed in Noel Brago’s freekick.

It then became a tension-filled contest, as Smit and FEU coach Vince Santos exchanged pleasantries at the touchline. In a mirror of the first half incident, this time La Salle were frustrated when they weren’t awarded a penalty after Joyel brought down Koizumi in the FEU box.

Afterwards, a rough tackle from Audie Menzi towards Gonzales prompted a scuffle between the two teams, for which players from both sides were given yellow cards.

La Salle and FEU had chances to win the game right to the death, yet a winning goal wasn’t meant to be, and both teams had to make do with a 1-1 draw. Santos added, “I think among all our games today is a big improvement in terms of our movement, creating chances, shots on goal. It just didn’t fall for us whether it was a save or block, for some reason we weren’t able to convert.”

Up next for La Salle (12 points) are the National University on March 30, 4:00 PM, at Ateneo’s Moro Lorenzo Field in Katipunan. On the other hand, FEU (19 points) shall face the University of the East on April 1, 3:00 PM, at Rizal Memorial.