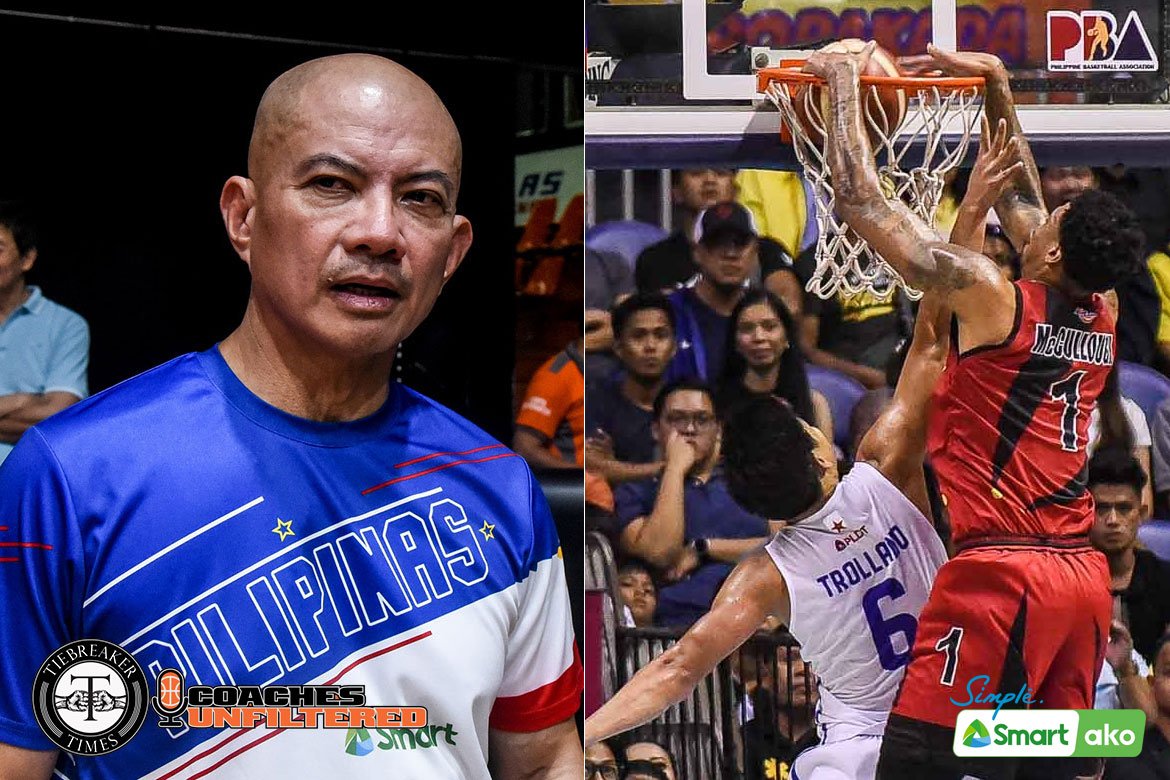 Yeng Guiao would still bat for size as Gilas Pilipinas is now on the lookout for its next naturalized player after Andray Blatche.

It has become quite a discussion as to which type of player should Gilas get now that it is moving from Blatche, who has been with the program since 2014.

Some say that a big would be suitable still like Blatche and Marcus Douthit, but others think that a winger would also be fine given Gilas’ frontline of the future.

Well, Gilas has young bigs in 7-foot-2 wunderkind Kai Sotto and the 6-foot-9 AJ Edu, both of whom could play for the country in the 2023 FIBA World Cup.

Guiao, though, has made it clear where his stance on the matter is. But the outspoken mentor said that being big isn’t enough.

“But in international play, you just cannot be big,” said Guiao, who manned the sidelines for Gilas in last year’s World Cup in China.

Guiao explained that the next naturalized big should be capable of stretching the floor, which has become a staple in today’s game.

“You have to have an outside shot. You have to be able to step out and take the three-point shot, or at least a medium-range shot with consistency.”

Aside from having such offensive skill, Guiap said that what matters as well is quickness, most especially on the defensive end.

READ  Thirdy Ravena elated to play with Kiefer, but knows pressure comes with it

“You cannot be big but slow,” he said. “You have to have quickness. Number one is the quickness to switch, to playing and guarding and keeping a guard infront of you, because the switches are going to happen.

“If you switch on a wingman who’s a national team player of the other side, you can be sure that that guy is good and he can shoot, and he’s going to be quick. Now if the big man is slow, that’s going to be a weak link in your defense.

“But if the big man is quick, he’s big but he can stay in front of the guards then you have one less problem defensively,” Guiao added.

Lastly, it is important, too, to have that kind of toughness to last and endure the banging for almost the entirety of the game.

“Defensively, you have to be tough because the problem as a naturalized player, in a forty-minute game, you’re going to have to play thirty-seven minutes. And if they take you out to rest, there’s probably going to be mismatches.

“Thirty-seven minutes of banging against somebody as big as you are or probably even bigger,” Guiao shared.

So far, the Samahang Basketbol ng Pilipinas has three players on its radar that could be Gilas’ next naturalized player.

Then there are PBA imports in Barangay Ginebra star Justin Brownlee, as well as Chris McCullough of the San Miguel Beermen.

Brownlee and Kouame are candidates for naturalization as separate bills seeking to grant them Filipino citizenship have been filed to the Congress.

Both have yet to progress, however.

Meanwhile, McCullough, just like Brownlee, has always been vocal of his interest to suit up for the Philippine national team.

SBP president Al Panlilio had disclosed in an interview before that they have already gotten in touch with him, but talks are still at a very early stage.

For Guiao, himself a former legislator, he remained firm on his recommendation that Gilas should have more options for naturalized players.

“I’ve always said this: You don’t need to have just one. What we can do is to propose to Congress naturalize three, four, or maybe even five at the same time,” said the 61-year-old Guiao. “If you’d only have one, you’re stuck with that guy. Whatever happens is he knows you can’t bargain with him because he’s the only guy you can use. But if you have two, three, four options, it becomes easier to control that situation.

“So, I think that’s the first thing we should do is look for the right naturalized player – not one, but have two or three maybe four and send their names to Congress and go through the process and start working with these guys.”