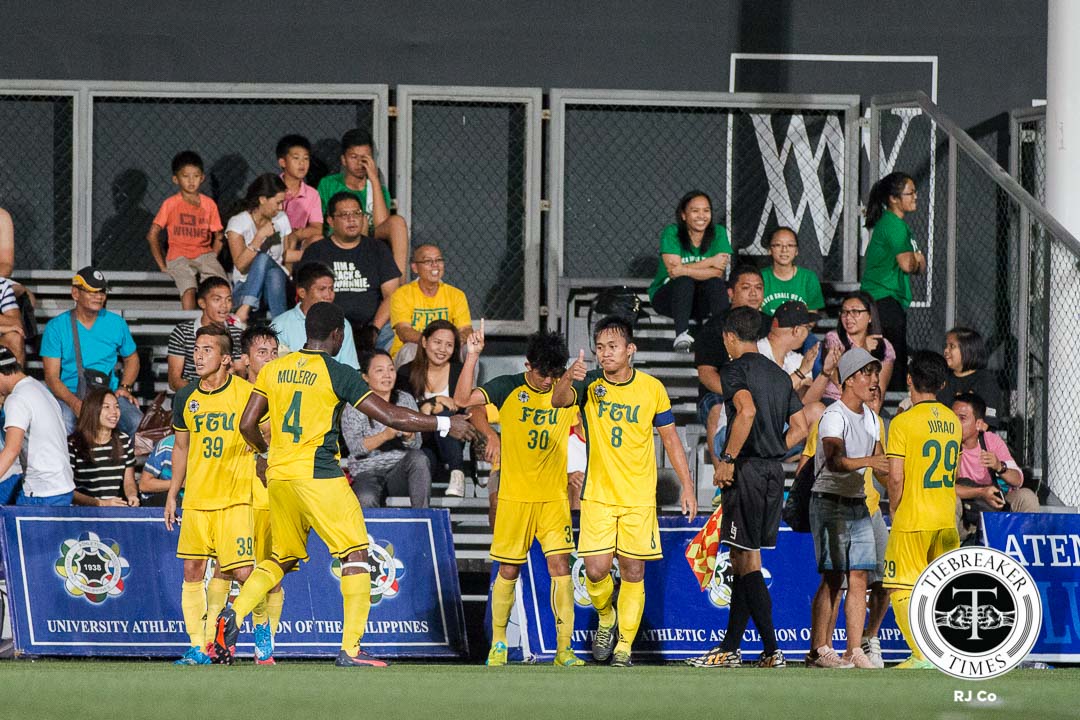 Start fast, finish strong is a mantra for top teams regardless of what sport they compete in. The Far Eastern University Tamaraws endured a poor start to their UAAP Season 78 Men’s Football Tournament campaign but they began the second round with a, 1-0, win against the De La Salle University Green Archers at the McKinley Hill Stadium in Taguig.

Rico Andes was the sole goalscorer (71′) for the Tamaraws while Jose Montelibano got sent off ten minutes earlier (61′). The result helped FEU climb the league table at 3rd place with 14 points. As for La Salle, the Green Archers were relegated to 2nd place with 17 points after the University of Santo Tomas Growling Tigers drew with the University of the Philippines Fighting Maroons earlier in the day.

The result was a welcome outcome for FEU as La Salle was one of two teams to beat them in the first round. The Growling Tigers were the other team and no doubt the Tamaraws would want to get one over them as well. It was also the first loss for La Salle in the elimination round in two seasons.

The first half of the match was bossed by the Tamaraws. While the Green Archers had their moments, it was very much the Tamaraws who threatened to draw first blood more. FEU knew what to do with the ball when it was under their possession. La Salle, on the other hand, struggled to get a hold of the ball.

FEU was able to nullify La Salle’s shape on the pitch with the Tamaraws’ versatility crucial in their play. Midfield was controlled by FEU, and in turn they were able to wins a lot of fouls and create shots towards goal. Eric Ben Giganto had a shot but it went over early in the match. The Tamaraws had numerous shots towards the La Salle goal, but the Green Archers’ defenders put their bodies on the line to block the attempts.

Val Jurao was a constant threat throughout the half and he had his shots saved by La Salle goalkeeper Paeng De Guzman and blocked by the latter’s defenders. Aside from Jurao, Giganto ran through the channels to find gaps in the La Salle backline. Giganto was able to find an opening from outside the box and he unleashed a goal-bound shot but De Guzman was on hand to save it.

Perhaps FEU’s golden chance came when two Tamaraws overloaded the left flank and laid the ball across the La Salle goal, Nicolas Ferrer made a late run towards the box but he miscued his shot and it went over.  Due to their intricate play, FEU forced a lot of dead ball situations in the La Salle half. Dominique Canonigo and Audie Menzi had their chances but both failed to hit the target from their free kicks.

La Salle, however, had moments despite the fact they were pegged back most of the time. Jose Montelibano delivered a good ball towards captain Gelo Diamante but FEU goalie RJ Joyel rushed out and thwarted La Salle. Gelo Diamante then had shots but Joyel wasn’t challenged.

The best chance for La Salle fell to Greggy Yang who entered the FEU box but his shot was blocked out. It landed, though, to Jojo Borromeo but his effort was too tame for Joyel. It finished scoreless at halftime and both teams were frustrated for different reasons.

With the Tamaraws holding the ball, the Green Archers were forced to sit deep and threaten the FEU goal on the counter. However, the Green Archers’ lost possession multiple times after they made so many long shots which either failed to test Joyel or went out of play. One of the Green Archers’ best passages of play occurred when left-back Gerald Layumas ran through the left flank and delivered a cross across the FEU box but midfielder Jed Diamante miscued his shot and the ball went over.

Just as how heated the past encounters of both teams were, it came as no surprise that someone got sent off. Montelibano was given his marching orders by the referee at the 61st minute for supposed “verbal abuse” between him and a FEU player. It was a contentious call as players are normally told off by the referee, or worse, given a yellow card for the said action. It was a big blow to La Salle as the Green Archers were now forced to deal with the FEU bombardment with just ten men.

With blood dropping for the Green Archers, the Tamaraws were motivated to go for the kill. FEU constantly probed for that winning goal. Menzi had a shot from outside go over while de Guzman parried away a free kick from the Tamaraws. The La Salle defense which consisted of De Guzman, Noel Brago, Layumas, Nicko Villacin and Jhoguev Ybañez were just immense and they kept FEU at arm’s length.

Nevertheless, the goal was coming for FEU and it arrived at the 71st minute. A counterattack by FEU led to the ball being passed to Andes, who in turn penetrated the La Salle box and rounded up the Green Archers’ defenders. It was a deserved goal for FEU after a strong overall performance in the match, while La Salle could only lament the circumstances they were in.

Despite the fact everything was going against them, La Salle still pushed for an equalizer. Villacin had a free kick but he failed to test Joyel while Javier Romero-Salas’ attempt was cleared for a corner. The Green Archers then had two great chances to level the scores but Borromeo’s attempt was cleared for a corner and Villacin headed wide afterwards.

Paolo Bugas had a shot saved deep into stoppage time by De Guzman, but the Tamaraws held on for three valuable points.

On the other hand, La Salle head coach Hans-Peter Smit was frustrated with the officiating after the game. Smit said, “How many times did he (the referee) put the assistant referee’s flag down? Three times on our call. I don’t mind if there was a call na for FEU but all those three times he did, he called it against us.” He then mentioned other instances he felt were lapses for the referee against La Salle, especially Montelibano’s red card. “It was player to player, that’s a yellow card! That’s in the rule book! There’s no such thing as verbal abuse – yellow card.”

In the end, though, Smit accepted the result and moved on immediately. “It was good that we lost now. No problem there. We lost now. It’s a wake up call. It’s a good loss because we were ten and we were pushing them. Next game will be different.”

Both teams’ matches will be on March 19, 2016 (Saturday) at the McKinley Hill Stadium. FEU will play against UST and La Salle shall face UP. Kickoff times are to be announced.