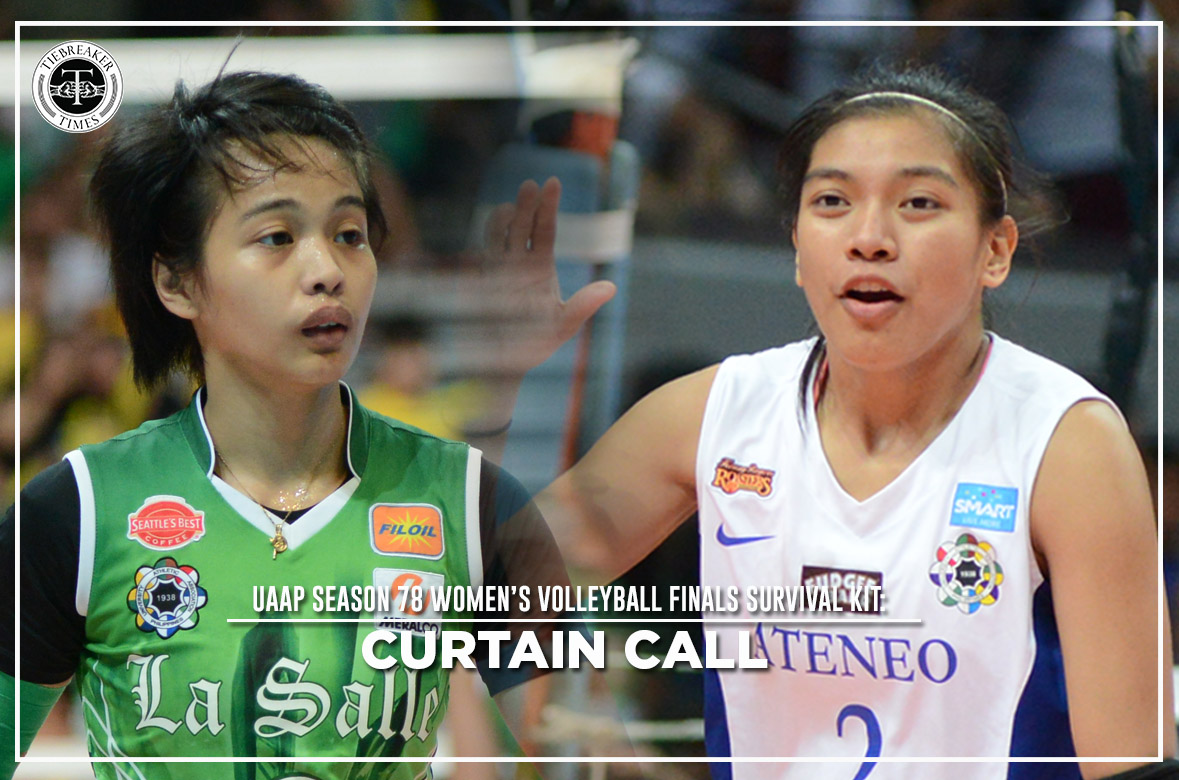 Yes, there were other stars. But this Ateneo-La Salle rivalry with Valdez, Galang, etc. resuscitated local volleyball.

On Saturday, the rivalry peaks as it comes to its inevitable end. Six of the stars that headlined their matches for the past five years are playing out their last few college matches. They meet in the Finals for the fifth straight year. La Salle dominated the initial two series. Getting a needed reinforcement from Thailand, Ateneo took the last two.

This series is the Tiebreaker and how fitting it is that it is also the last chance for most of the lead performers.

Here, we dissect the matchup one last time. Is Ateneo an Alyssa Valdez team? Can the Lady Spikers match Ateneo’s dynamic offense?

Ateneo is not a one-woman show

The Lady Eagles stopped being Alyssa De Manila University in Season 76. Focus on Valdez to much, and watch the other Lady Eagles rain spikes.

This season, Valdez scored the least points in her career. Meanwhile, Jhoana Maraguinot and Bea De Leon put up career offensive numbers while Kiwi Ahomiro regained her touch when she shifted back to her middle hitter position.

Ateneo would not be an elite team if Valdez was scoring 70% of their points. More than any sport, volleyball requires teamwork. Someone needs to pass well for the setter to get a good pass which her spiker can easily convert. Volleyball’s basic rules prevent Valdez from doing it all.

If there’s anyone La Salle should look to stop, it’s reigning Best Setter Jia Morado. She has mastered the low-fast sets that has consistently broke La Salle’s defense over the past few years.

In order for DLSU’s tall blockers and prolific back row defenders to set up, they need to serve well. The Lady Spikers rained 11 aces in their first round, straight-set win over Ateneo. In their second round, five-set loss, La Salle had 17 service errors.

The trick is to get Ateneo’s receivers to move and pass. The Lady Eagles’ reception has improved as of late so targeting specific receivers may not be anymore. Ateneo has the most trouble when their opponents target zones and force them to communicate and react.

It doesn’t matter how great a setter Jia Morado is. If she has to constantly run and catch up to her teammates’ bad first touches, La Salle’s defense will have the time to either block or get momentum through a good dig.

The most effective way to slow down a good team is to give them hell right from the first touch. Think of it this way, a team really only gains ground when they’re serving.

There is no questioning La Salle’s terrific defense – they’re first in blocking, digging, and reception. In basketball, the Lady Spikers can be likened to a team that likes to grind their foes out with tough physical defense and thrives in low-scoring games. The problem, there’s no such thing as a defense-only team in volleyball. They need to score 25 times to win a set.

The La Salle offense has a tendency to stagnate. They start sets fine, giving everyone attempts. But as the cheers get louder and their foes begin giving the problems, La Salle struggles.

Watch the fifth set of their Final Four loss to the FEU Lady Tamaraws and find that they set too often to their open hitters. Kianna Dy had 20 points during that match but she scored 14 of those during the first two sets.

Head coach Ramil De Jesus summed up his team’s struggles during a timeout on that match.

Even when the passes don’t fall exactly to her lap, Jia Morado can still vary her sets. She’s crazy enough to try long underhand sets to her utility hitter, jump sets while she’s going 30 kph in a forward direction, or one-handed sets when the pass goes too low and near the net. Morado also has the luxury of tossing to Valdez no matter where the MVP is and knowing she can get a kill with relative ease.

Kim Fajardo needs to be as dynamic as Morado. La Salle does not have the safety blanket of an all-time great scorer like Valdez. In tight situations when not all passes will be perfect and long rallies are ubiquitous, Fajardo needs to exploit all of her options and not just set to the open. Kim Dy and Majoy Baron are two of La Salle’s best attackers – they need more touches.

If at any point in the match, La Salle resorts to just setting to the open hitter, they’ll lose. Ateneo has shown they can defend Demecillo and Galang’s attacks. Ateneo’s open hitters also have higher attacking percentages.

We can’t read players’ minds but, for sure, both sides are feeling the pressure. This series can very well come down to who reacts better stomach turning moments of the match.

With how this season has gone, don’t be surprised if this series goes down to the fifth set of Game Three or if it ends in a two-match sweep.