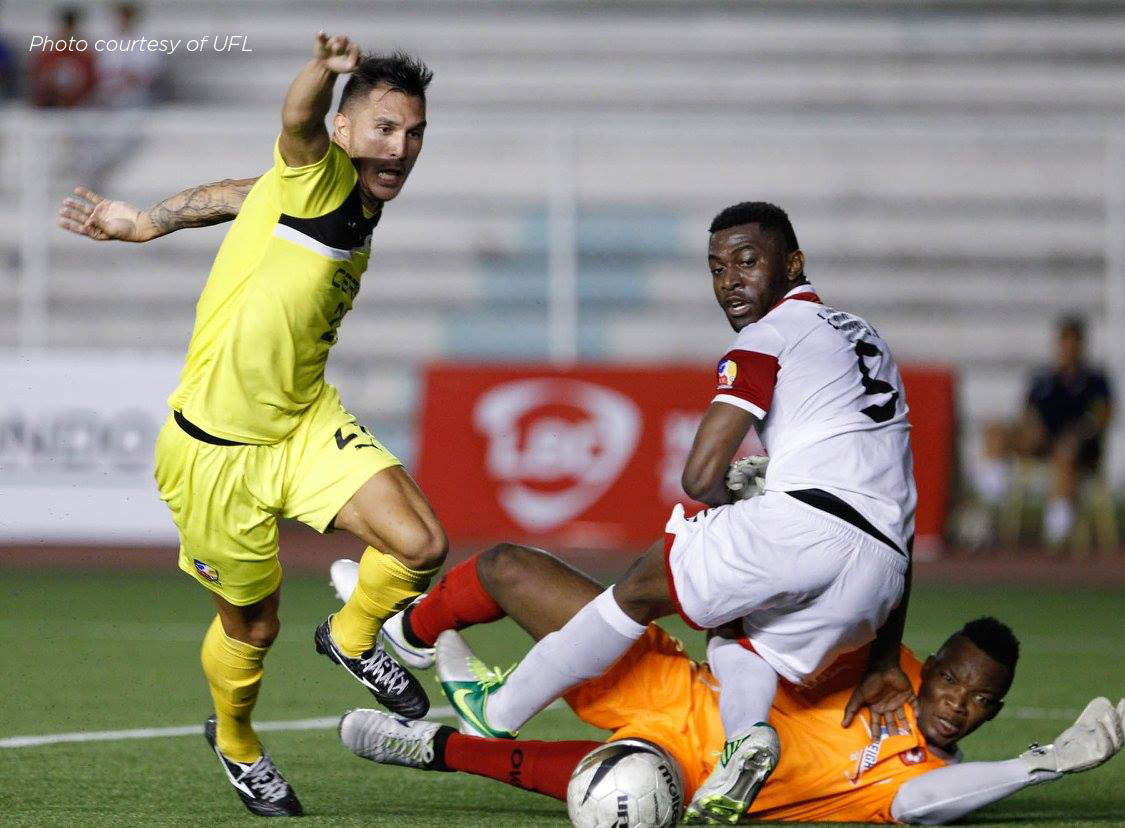 While the other semifinalists grinded out wins to overcome their quarter-final rivals, Ceres-La Salle FC delivered a 7-0 beating of Forza FC yesterday evening at the Rizal Memorial Football Stadium.

In a top versus bottom clash, it’s not be surprising to see Ceres-La Salle take over all throughout the 90 minutes. They effectively did, but it may have been different had Forza’s Park Ryul converted an early chance in the opening minute. Aiming to catch the unsuspecting backline, the South Korean failed to realize the plan by sending his effort harmlessly wide. That’s about the closest Group B’s fourth-ranked team went in going ahead as the UFL champions got their groove on right after.

Nate Burkey and Jeffrey Christiaens led the attacking barrage in the early goings. Testing the Forza defense with their series of pursuits, the duo eventually reaped the rewards of perseverance by scoring one each within the first 20 minutes of action. For the first goal scored at the 15th minute mark, Juani Guirado sent an incisive pass towards Christiaens who finished by chesting the ball down before hitting a precise half-volley. Two minutes after, Christiaens turned from finisher to creator when he set up Burkey with a decent cross which the latter headed in from an acute angle.

After the Filipinos, the Ceres’ Spanish duo of Bienvenido Marañon and Adrian Gallardo tried to get into the scoresheet. Both got on the thick of things, but it was Marañon who achieved success between the two prolific scorers. At the 36th minute, Marañon tucked the loose ball off a scramble to pad their lead.Three minutes later, he recorded his second by timely heading in Burkey’s corner. The first half ended 4-0, a score that would have been far different had Forza keeper Abu Ibrahim failed to display a decent performance between the sticks.

It was more of the same after the interval. Forza again got things going with a half chance coming by way of an easily saved Steph Burda free kick three minutes into the second half. It was another early chance which Forza weren’t able to build on going further in the game.

As almost half of the starters were replaced, the substitutes took charge for Ceres. At the 53rd minute, Arnie Panisabo forced a good reaction save from Ibrahim. Lee Jeong Woo’s introduction at the hour mark made immediate impact when he teed up Gallardo on the counter. Taking his time, the Spaniard made scoring look easy by beating his marker before whipping a shot past Ibrahim. Marking Gallardo became a shared responsibility afterwards, enabling the striker to find Jalsor Soriano. Operating with space, he compounded Forza’s misery by slotting in the Busmen’s sixth of the night.

The scoring party did not end until the 80th minute when another substitute, Jason Panhay, squeezed a decent effort just into the correct side of the near post to complete the 7-0 rout. It should have even been eight when Soriano was felled by Fredy Lobe Mbang inside the area. Val Kama, however, blew the spot kick five minutes from time. Still, it did little to spoil what had been a pleasant evening for Ceres-La Salle.

“I just told the boys before the game that we don’t take anyone lightly. Sometimes, [when] we take anyone lightly we have a bad game. I think everyone responded to it. It was a good game,” Ali Go told. For him, staying patient was valuable.at the start as the opponents formed a compact defensive formation to stave them off. Once.scoring, Ceres-La Salle exploited a more open Forza defense to pour in more throughout the match.

After huddling past Forza in the quarterfinals, he shifts the team’s focus to a tougher foe in fellow.AFC Cup team Kaya FC. It will be an interesting finals rematch for Ceres-La Salle as Kaya was the team that denied them the league and cup double last season. Their clash will take place this Wednesdayevening. As for Forza, they have to prepare for the Loyola Meralco Sparks in the plate semifinal on Thursday.