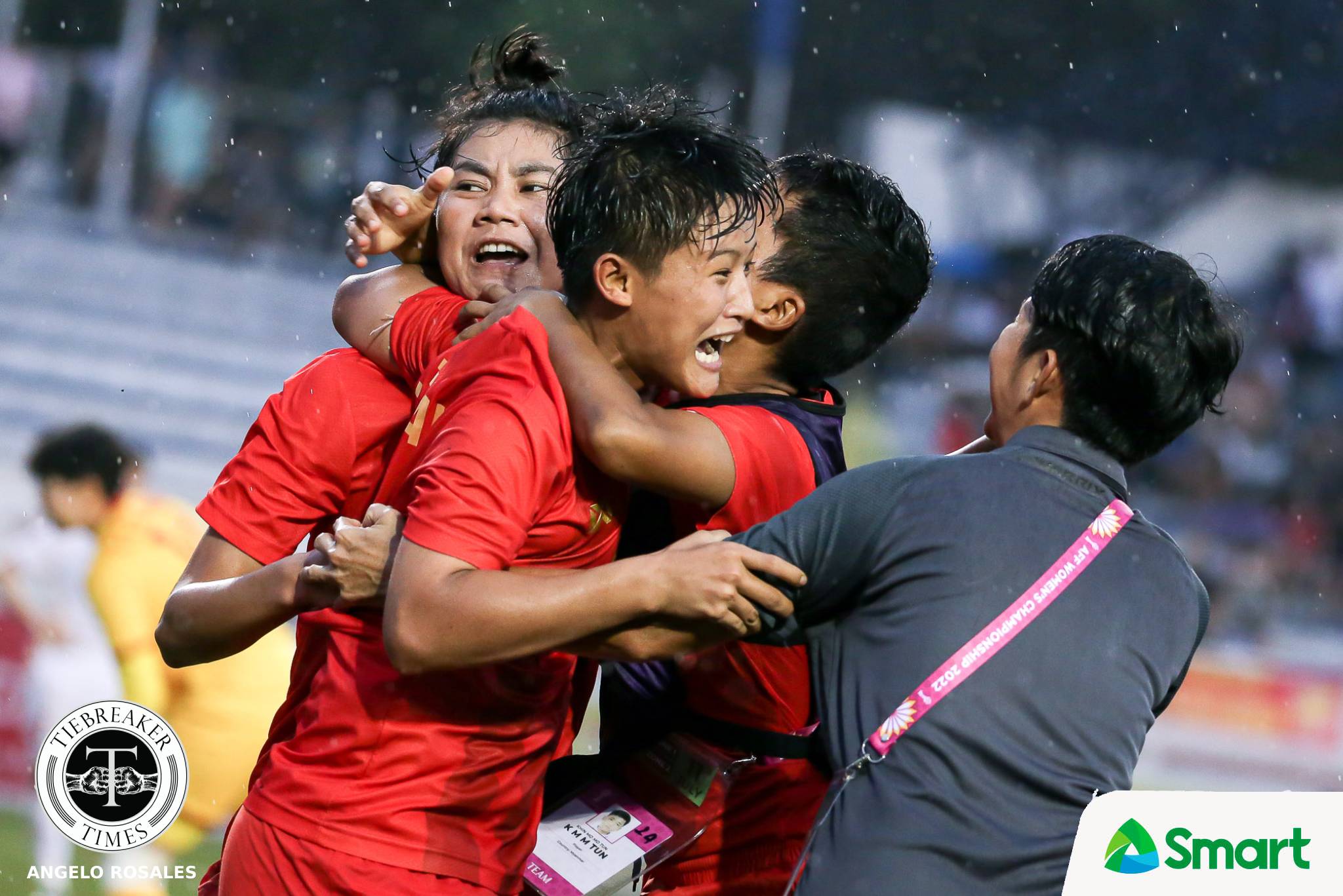 San Thaw Thaw was in the right place at the right time, lifting Myanmar to a 4-3 triumph over deposed champion Vietnam in the bronze medal match of the 2022 AFF Women’s Championship, Sunday evening at the Rizal Memorial Stadium in Manila.

The prolific striker pounced on a missed save from Vietnam’s keeper Khong Thi Hang in the 88th minute. That put the game out of reach of the white shirts and set up the upset victory.

The result saw Myanmar take its second consecutive third-place finish in the championship – and its third bronze overall after 2016 and 2019. Vietnam, on the other hand, slipped to a fourth-place finish for the second time after missing the podium as well in 2015.

The Golden Girls, though, had to pull themselves out of the hole multiple times in the match.

Myanmar took advantage of Vietnam’s slow start on defense to dominate the possession at the start of the match. And from there, the Asian Lionesses made sure to make incisive runs into their final third.

Eventually, just 10 minutes into the contest, the Burmese side got the opening goal in the set piece. Midfielder and captain Khin Marlar Tun sent a decent ball from the left corner towards the box, which landed awkwardly in between a scuffle in front of the net.

San Thaw Thaw saw the ball near her area and took a shot Vietnam’s goalkeeper Khong Thi Hang tried to save. She then made sure to make her second chance count, punishing the failed save with the battle’s opener and the 1-0 lead for Myanmar.

The red shirts continued to control the pace of the match, but the most recent champions of the tournament knew there is a huge amount of time for a comeback.

Fourteen minutes after and against the run of play, Vietnam found its equalizer from no less than its top scorer and captain Huynh Nhu. The striker put the ball at the back of the net after receiving the ball from the top of the box.

With momentum shifting to the side of the 2019 champions, the white shirts stamped their class again on the counterattack in the 41st minute. Huynh Nhu once more, with ample space, controlled the ball and then blasted her second to put her squad into the lead heading into the break.

As if a switch turned on, Vietnam stepped on the gas on their offensive rhythm as soon as the second half started. But it was Myanmar who scored the next goal and put the match on level terms again in the 58th minute, with San Thaw Thaw finishing another scrappy play at the box.

With the match opening up both sides found their respective third goals in unlikely situations. Vietnam took the lead in the 83rd minute pouncing on a back pass error with a Pham Hai Yen strike, while Myanmar plucked theirs on another goalkeeping mistake with substitute Lin Mynt Mo scoring.

That set up the wild finish for San Thaw Thaw and the Burmese side at the end of the 90-minute goalfest.