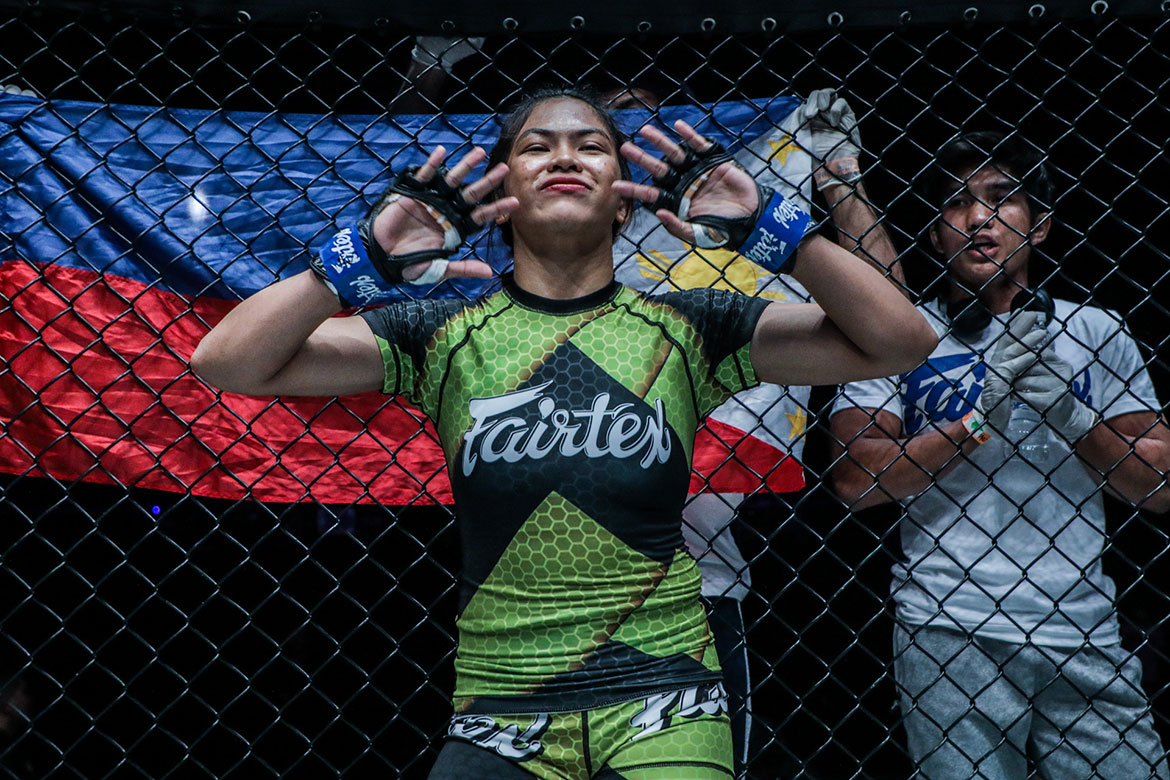 After an impressive outing against Mei “V.V” Yamaguchi at ONE: King of the Jungle last Friday, February 28, Denice “The Menace Fairtex” Zamboanga’s wishes came true.

The rising Filipina star will compete against “Unstoppable” Angela Lee for her ONE Women’s Atomweight World Title.

If things go her way, she could also feature in one of the biggest ONE Championship cards this year.

With the Infinity Series set to stop by the Mall Of Asia Arena in Manila, Philippines this May for ONE: Infinity 2, Zamboanga hopes to be part of that historic event.

“Of course, I would be so happy if I fought in my own country,” Zamboanga said.

“It will be the first time I’ll compete in Manila and I’d love to join Brandon Vera [on] the card.”

ONE Heavyweight World Champion Brandon “The Truth” Vera defends his strap against Olympian wrestler Arjan “Singh” Bhullar in the main event of the card.

ONE Lightweight World Champion Christian “The Warrior” Lee is also in action when he defends his strap against Iuri Lapicus. Meanwhile, “The Underground King” Eddie Alvarez and Saygid “Dagi” Guseyn Arslanaliev are set to spice things up in one of the featured bouts of the night.

With ONE Chairman and CEO Chatri Sityodtong promising three World Title bouts for each Infinity card, it is not a far-fetched idea to have the Women’s Atomweight World Title bout in Manila as well.

“I am really happy. Even though I only fought twice here in ONE Championship, Chatri already gave me the opportunity to fight with the champion in this division,” Zamboanga said.

“I really want to thank Chatri for giving me this opportunity. I’m thankful that he believes I deserve this fight even though I haven’t fought much here. It’s really a big opportunity.”

Admittedly still shocked by the announcement, “The Menace Fairtex” must now put her admiration for Lee to the side as she looks to make history by becoming the first Filipina World Champion in The Home Of Martial Arts.

“Angela Lee is my idol. I was not really expecting that I’ll face her soon. Right now, I’ll have to prepare for that fight for sure.”

Up next, the world’s best strikers converge at the Phu Tho Indoor Stadium in Ho Chi Minh City, Vietnam for ONE: HEART OF HEROES on March 27.

In this article:Denice Zamboanga, Fairtex, ONE Infinity 2