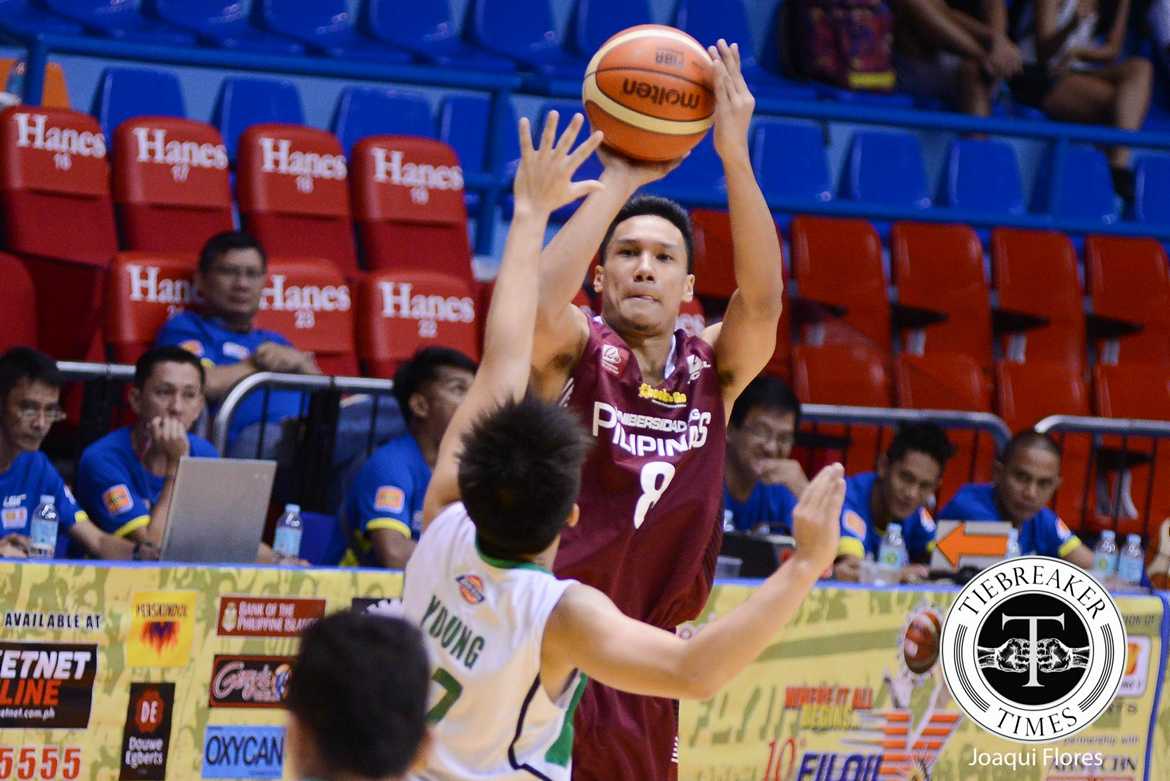 After stunning the Far Eastern University Tamaraws last Wednesday, the University of the Philippines Fighting Maroons locked down on the still listless College of Saint Benilde Blazers in a 67-58 win to secure their second win in the 2016 Filoil Flying V Premier Cup Saturday afternoon.

Dave Moralde once again led the Maroons with 14 markers and five boards. Diego Dario added ten points, converting on seven of his 12 free throw attempts, while energetic big man Andre Harris crashed the boards in grabbing 13 rebounds in the win.

After being limited to just ten points in the opening quarter, the Fighting Maroons clamped down on defense in the second stanza in limiting their opponents to just nine second quarter points to cut the Benilde lead to just two, 27-25, entering the break. CSB’s Filipino-American student-athlete Yankee Haruna led his team at the half with eight points, including a highlight-reel dunk in the first quarter, while Jett Manuel scored six points in the opening half.

“We were actually making the stops but giving them the second chance points,” UP head coach Bo Perasol said about their first half performance. “We were not able to score but we got somebody open. Ang importante is we implemented the things we worked on sa practice.”

Getting momentum from the second quarter, the Maroons locked their opponents down on defense as Benilde only scored two points in the first five minutes of the third canto. On the other end, UP went on an 11-0 rally to gain a 38-29 lead capped by a conversion from long distance by Kyles Lao. Outside of Carlo Young’s pull-up jumper at the 2:16 mark of the third, the Blazers were limited to just free throws to close-out the quarter with UP up 46-38.

READ  Despite team of alphas, Juan GDL says UP does not have chemistry issues

“It has to be because it is our only way. In the UAAP, we will not be the biggest team,” the former Ateneo head coach said about the team’s defensive scheme. “This will give us a fighting chance to beat anybody but we need to make sure that we are conditioned on doing it.”

The Blazers went on a 9-3 rally to start the final quarter with five points coming from JJ Domingo. However, the Maroons were able to answer right back after a booming triple by Moralde and a three-point play by Paul Desiderio, who was inserted into the power forward slot. Baskets by JJ Domingo late in the game cut the deficit to just six, 63-56, with a couple of minutes remaining in the game but turnovers and free throws by Diego Dario and Moralde sealed the game for the Maroons.

“This is going to be a good booster for us in a sense na justify yung mga ginawa namin para manalo,” Perasol said about the win.

READ  Yeng Guiao on Kai Sotto's addition: 'Maybe it's time for him to try the big boys'

Despite pouring 30, Ahanmisi says ROS ‘did not come to play’ in Game 4

Mabanag, Blue Eagles drift away with promising futures in store