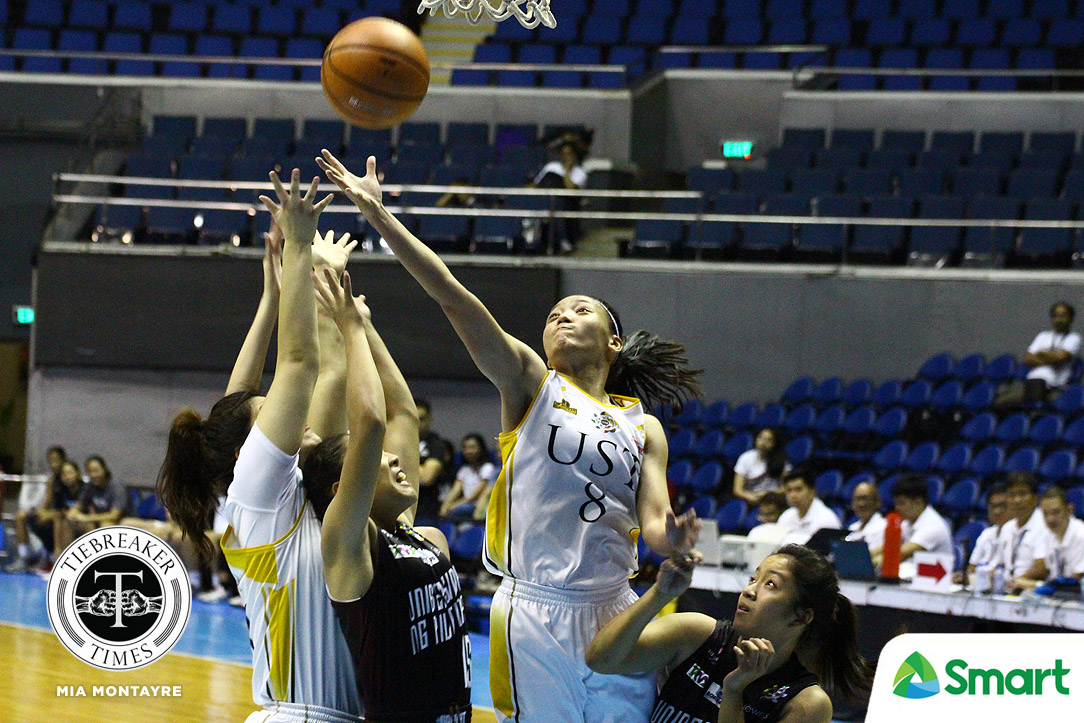 How do you follow up an 87-point beatdown? By dealing another one.

Behind another spectacular outing by Sai Larosa, the University of Santo Tomas Growling Tigresses ran roughshod on the University of the Philippines Lady Maroons anew, picking up a 103-58 win, Wednesday morning at the SMART Araneta Coliseum.

UST have won both of their games against UP this season by an average margin of 66.0 points per game, as the Growling Tigresses blasted the Lady Maroons, 129-42, last September 22.

Moreover this is UST’s third straight win as they go up to 6-3 – tied for second with the FEU Lady Tamaraws.

After figuring in a slow first quarter, the Growling Tigresses surged in the second frame behind Larosa. The graduating senior outscored the entire UP team, 11-9, during that span to help give UST the lead for good.

And it was just the start for the Tigresses, as they utilized a 40-point third canto to completely blow the game wide open. Larosa added 14 points during that quarter, while Grace Irebu added 12 markers.

As the dust settled, Larosa – who is second in the Most Valuable Player race – tallied a career-high 35 points to go along with 14 rebounds and four assists.

Irebu, a Congolese student-athlete, had a monster outing as well with 20 points, 17 rebounds, and five blocks, while Capilit chipped in 16 markers in off the bench duties.

UP dropped their 27th straight game, falling to 0-9 for the season.

Noella Cruz had 14 points to lead UP, while Lou Ordoveza added 11 points.

UST look to stop the National University Lady Bulldogs’ streak on Saturday, October 27, at 3:00pm. UP, on the other hand, face the Adamson University Lady Falcons on the same day at 1:00pm. Both games will be held at the Filoil Flying V Centre.