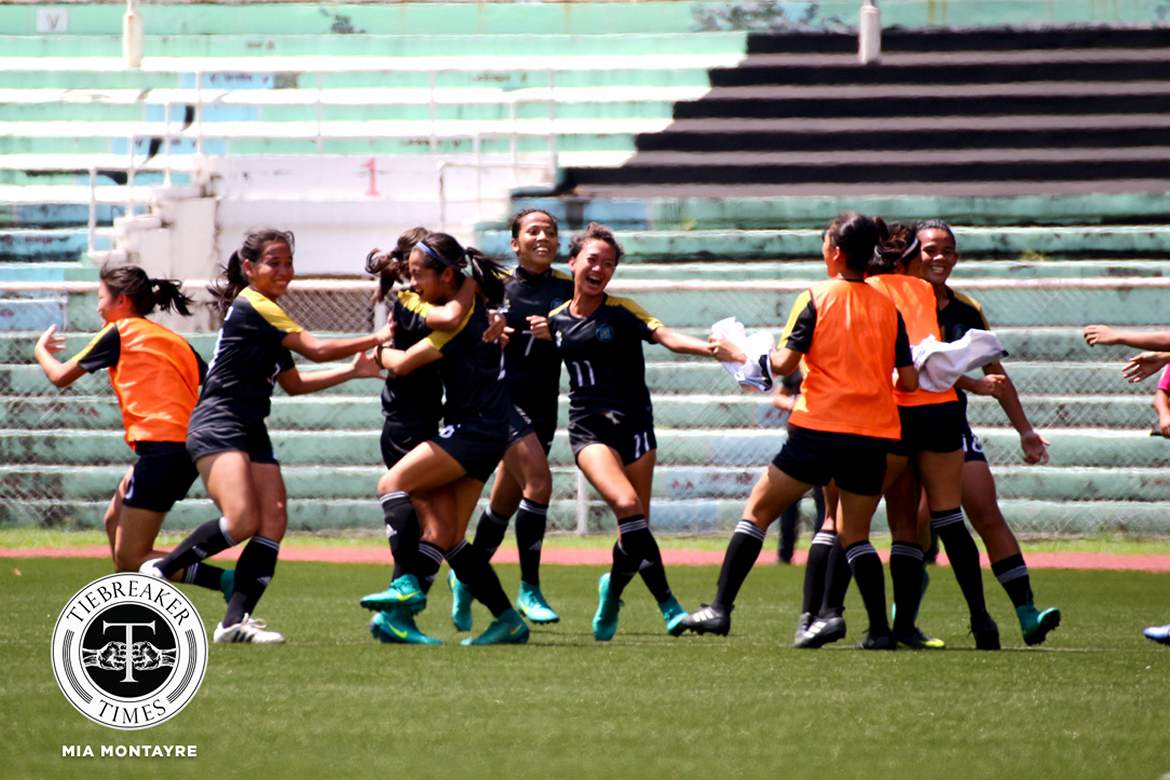 After five years, the University of the Santo Tomas Lady Booters are back in the UAAP Women’s Football Tournament Finals!

Goals from Jan Cleofe, Mary Indac and Hazel Lustan — plus a brace from Charise Lemoran — won UST the playoff against a determined Ateneo side. On the other hand, braces from Tiffany Siy and skipper Cam Rodriguez weren’t enough to give the Lady Eagles their maiden finals appearance.

The first half was everything a football fan would have wanted in a cup tie. The Lady Booters’ attacking play has been scintillating throughout their campaign and they had yet to lose a game to the Lady Eagles this season.

Ateneo’s backline was faulty throughout the match, and it leaked two early goals. Cleofe and Indac blitzed ahead of the Lady Eagles defense easily to score past goalie Marie Caparros in the 8th and 21st minute respectively.

Everything was going well for UST until a mishap from Lady Booters goalie Nicole Reyes allowed Siy to tap-in her first goal in the 32nd minute. It was a game-changer in more ways than one. Bizarrely and unconventionally, Rubio made Reyes stand by the side of the bench, which rendered her team without a goalkeeper.

READ  Vaughn Donayre in a must-win situation against Indonesian opponent

Rubio’s punishment for Reyes allowed the Lady Eagles to seize the initiative. Siy leveled the scores with ease after 35 minutes when her freekick easily went in the goal despite the numerous Lady Booters standing by the goal line.

Things then became worse for UST. Without Reyes at the helm, Rodriguez unleashed a longshot which crept into goal with just four minutes left before the break. Ateneo led 2-3 at the break, although questions marks were already there as to if they could defend it.

The Lady Booters then returned from the dugout with renewed vigor to win the game. Under pressure, the Lady Eagles conceded a penalty due to handball. Up stepped Lemoran, who converted the spot kick in the 54th minute.

Whatever resolve Ateneo showed to get themselves back in the game was lost. Rodriguez tried to shift the momentum back to the Lady Eagles, but her attempt was finely saved by a returning Reyes. That was the turning point of the game and the Lady Booters didn’t look back.

Lustan rounded up Caparros for UST’s fourth goal in the 67th minute, and the Lady Booters should have gotten their fifth goal earlier after the referee called for another penalty after a foul in Ateneo’s box. Lemoran stepped up once again, only for her to miss badly.

Nevertheless, Lemoran made up for it as she successfully pressed the Lady Eagles’ backline, intercepted the ball and rounded Caparros for the Lady Booters’ fifth goal of the match as the clock ticked to 80 minutes.

UST were surely through to the finals at this point. Not even Rodriguez’s 84th-minute goal could dampen that. After a difficult Season 78 campaign, UST have completed a 180-degree turn this year to reach the promised land with a 5-4 victory over Ateneo.