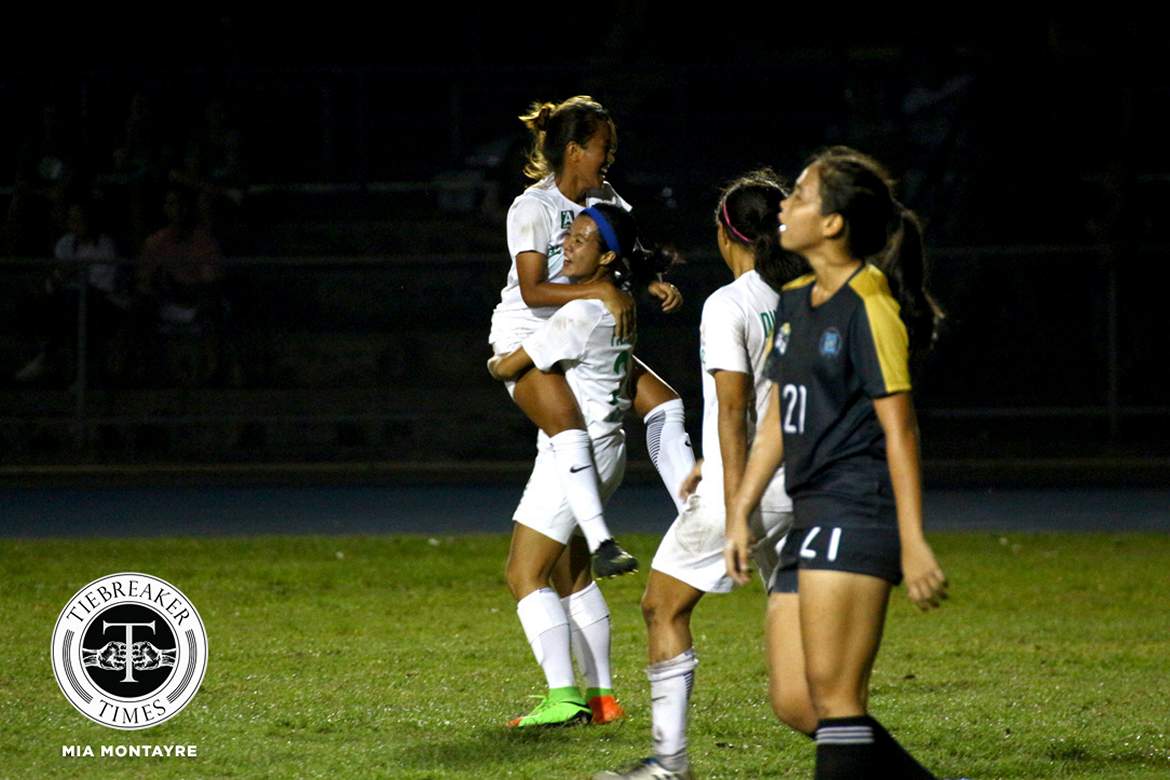 In the final elimination round game of the UAAP Season 79 Women’s Football Tournament, much was at stake in terms as to who gets to play the De La Salle University Lady Archers in the Finals.

That will still be determined, but La Salle rounded up the University of Santo Tomas Lady Booters, 3-1, tonight at the Moro Lorenzo Field in Ateneo de Manila University.

“That was our lousiest first half ever,” lamented La Salle coach Hans-Peter Smit. “Knowing my team they can go all the way. At least they picked it up in the second half. Hopefully I don’t have to do much coaching on May 7. It’s all up to them.”

Needing at least a draw to secure a finals ticket, the Lady Booters tried to outrun the Lady Archers as early as the first half. In their previous encounter, La Salle had routed UST, 6-2, in a humbling experience for the Lady Booters.

It came as no surprise that the Lady Booters felt relief when they drew first blood. MJ Indac found space to shoot in the La Salle box and her low shot went past a helpless Lady Archers goalie Inna Palacios after 21 minutes.

UST’s goal was only the second time La Salle conceded first this season. From a sloppy start, the Lady Archers galvanized themselves into the winning machine they have been throughout Season 79.

La Salle took their time in finding holes in the UST defense. The Lady Archers took their time, yet it felt inevitable that they would score. With just nine minutes left before the halftime break, Nicole Andaya crossed the ball from the right flank, and it was then turned into goal by Kyra Dimaandal.

Upon the restart, La Salle needed just five minutes to gain the lead. Nina Arrieta unleashed a powerful strike which went well above Lady Booters goalie Nicole Reyes. The Taft school was on the ascendancy, and UST were left to feed on scraps.

La Salle sealed the victory in the 80th minute mark courtesy of Chelo Hodges’ clinical finish. With eight wins in as many games, a sweep of the regular season has been achieved. Now it’s a question of whether or not the Lady Archers can win their first championship since 2011, on May 7 at the Rizal Memorial Stadium in Manila.

On the other hand, UST have to make do with a playoff for the other finals slot against the Ateneo de Manila University on May 4 at Rizal Memorial Stadium. La Salle end the elimination round with 24 points in first place, while UST finish with 13 points and second place.

“While UST and Ateneo have to push themselves and two days rest is not enough for them to get to the finals. We will be the better rested team come May 7 and we should use that to our advantage,” declared Smit.