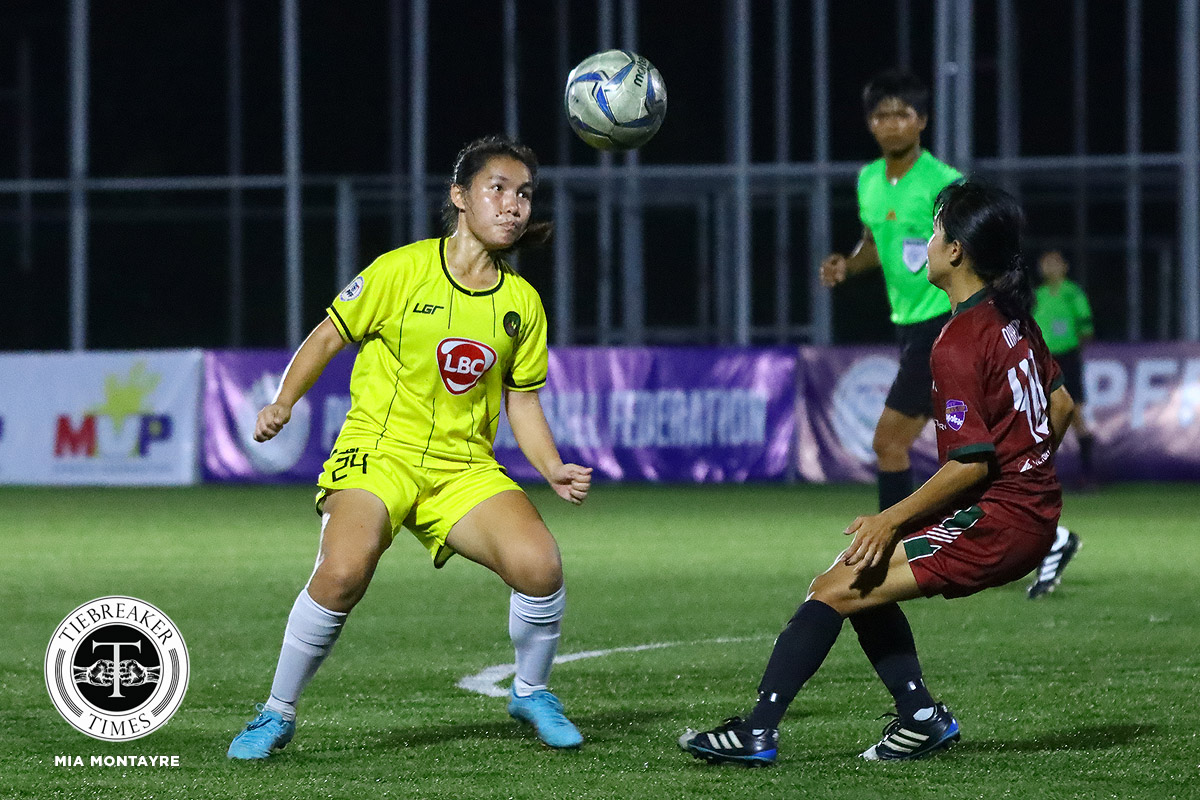 Kaya-Iloilo has snatched second place in the PFF Women’s Cup standings from University of the Philippines while Stallion Laguna could not escape last place even after splitting points with Azzurri at the conclusion of Wednesday’s action.

The first match of the day was a battle to avoid last place with Stallion Laguna having the extra incentive of getting their first points ever only to end up sharing points with Azzurri.

Stallion opened with promise after Jenny Tolis’ 9th-minute strike off a through pass from Hannah Faith Pachejo.

Azzurri was not deterred and switched things up after a shaky start. Their sustained hustle was rewarded after a wayward attack in the 44th minute led to a penalty from a handball in the area, the spot kick duly converted by Hannah Muros.

A minute later Stallion immediately countered which led to them getting a penalty awarded themselves after Princess Cristobas bodychecked Pachejo inside the box. Pachejo successfully took the penalty restoring their lead at the break.

Muros played heroine for Azzurri again in the second half after netting the equalizer in the 48th minute. With Stallion running on tired legs it was up to keeper AJ Javier to keep a determined Azzurri side at bay which would eventually earn her Player of the Match honors.

Meanwhile, Azzurri had every reason to be proud for the fight they had shown in being determined not to lose.

Lone Cadag goal enough for Kaya to nip UP 1-0

It was a battle for second place between University of the Philippines and Kaya-Iloilo and it was the club team that prevailed over their collegiate counterparts in a very tight contest.

Bolstered by the presence of national team stalwarts Hali Long with Inna Palacios between the sticks, Kaya was an imposing team that had a stranglehold of the proceedings for most of the match.

Five minutes past the half-hour mark, Mea Bernal played a long pass forward with the ball dropping in front of an onrushing Shelah Cadag who only needed the softest of touches to guide the ball past Eunice Eduave.

UP tried to fight back but could not break through Kaya’s disciplined rearguard led by Charisa Lemoran holding the center. Kaya would try to add to their tally with Lemoran setting up her teammates including Long who also came forward in attack. Still, these were smothered by a determined Eduave, thus making Cadag’s goal the only difference in the match.

#ReadMore  Philippines routs UAE to open campaign with a bang

The PFF Women’s Cup continues this weekend, November 26, at the PFF National Training Center in Carmona where Azzurri FC will face Tuloy at 4:00 P.M. and UST will take on Ateneo at 6:30 P.M.

On Sunday, November 27, Stallion Laguna will go against Kaya at 8:00 A.M. before FEU will clash with UP at 10:15 A.M. The games will be broadcasted live on the Facebook page of the PFF Women’s League.