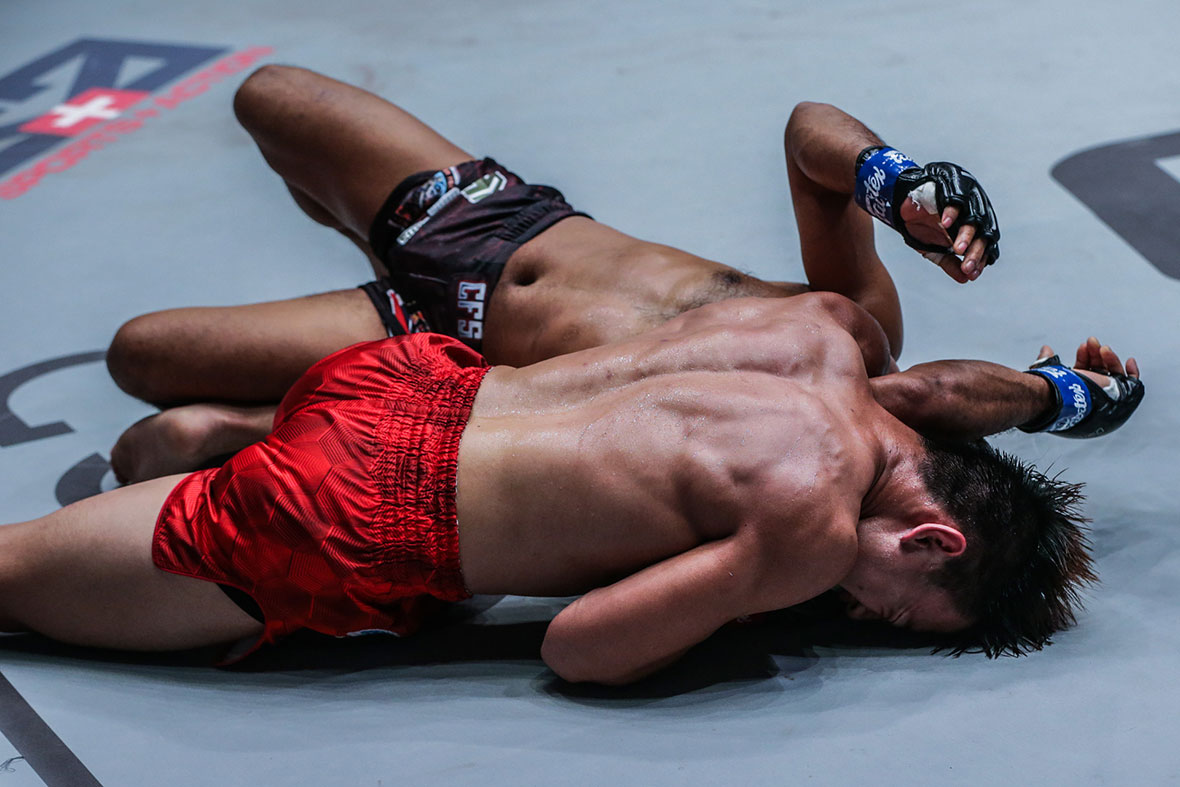 Criticized year-round for their struggles on the ground, Team Lakay came up with the perfect response in the final show for ONE Championship in the Philippines in 2019.

The athletes from the famed stable out of Baguio City looked more confident on the ground – obvious when Joshua “The Passion” Pacio submitted Rene “The Challenger” Catalan at ONE: Masters of Fate to retain the ONE Strawweight World Championship on Friday, November 8 at the Mall Of Asia Arena.

Pacio escaped an early heel-hook attempt from “The Challenger” before overwhelming his compatriot with his jiu-jitsu in the second round. There, he mounted Catalan and applied a masterful arm-triangle to secure the win at the 2:29 mark.

After a slew of submission losses this year, Team Lakay head coach Mark Sangiao was taking the criticism to heart, but not in a bad way.

“We were just mainly doing our assignments everyday – working and grinding,” Sangiao said.

“We would also like to thank our bashers, because we’re learning and we’re seeing our shortcomings through them. They are one of our motivations.”

It was not just Pacio who ended the night successfully, though.

Eustaquio scored a walk-off KO win over Toni “Dynamite” Tauru, blasting the Finn with spinning back kick to the liver.

Folayang, on the other hand, had a bittersweet result as he secured a technical decision win over Amarsanaa “Spear” Tsogookhuu. The referee stopped the match in the second round after an unintentional headbutt opened a huge gash on the Filipino’s left cheek.

Nonetheless, it was still an amazing night for Team Lakay, especially after struggling the past couple of months.

iIt’s an amazing night for us, Geje won via TKO in the third round. Eduard, though we’re not happy with what happened to him, he won. Joshua Pacio, of course, retained his belt,” Sangiao said. “I just want to thank the people who supported us through thick and thin, our sponsors and ONE Championship. To God be the glory.

“We’re very happy at the end of this year we made it again to the top. That’s life. Sometimes you fall but you just have to get up and do your job. As long as we’re living, there’s still victory.”

While happy with the results, Sangiao is never the type to be satisfied, especially since he knows the level of competition that awaits them in The Home Of Martial Arts.


The action never stops for ONE Championship as it returns next week for ONE: Age of Dragons in Beijing, China, on 16 November.