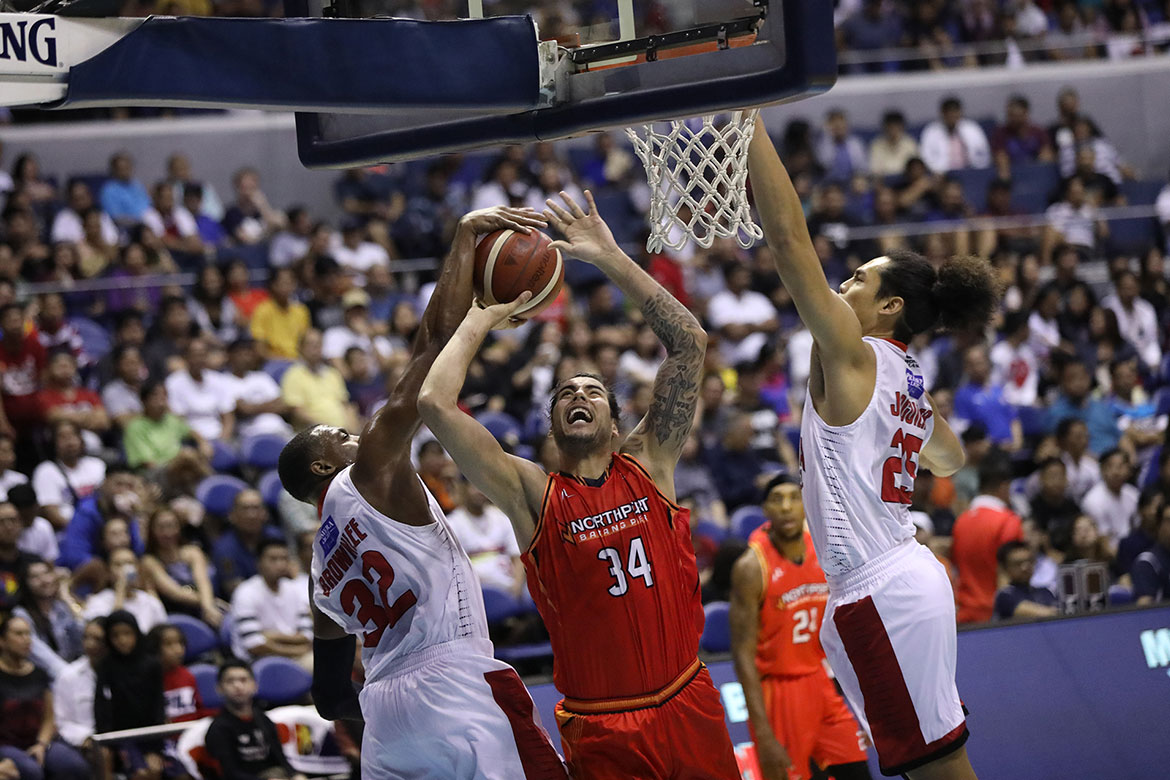 When Christian Standhardinger arrived at NorthPort, the Batang Pier were already halfway through their campaign in the 2019 PBA Governors’ Cup. And the Fil-German forward admitted adjusting right away has been difficult.

The 6-foot-7 bruiser became a Batang Pier last October when the San Miguel Beermen traded him for Mo Tautuaa. His arrived almost at the same time that the team decided to switch imports by bringing in Michael Qualls.

“It was not easy for us. We joined the team late, very very late. We had to adjust,” Standhardinger said.

His debut with his new team started off on the right foot when NorthPort took down the Beermen, 127-119. But it was also in that game where they lost rookie sensation Robert Bolick to an ACL injury.

Consecutive losses came after, as they dropped their assignments versus the Alaska Aces and the Meralco Bolts. But that didn’t stop Standhardinger and the rest of Pido Jarencio’s crew from working as hard as they could.

“We had an amazing win over SMB, then we lost very closely to Alaska. When we played against Meralco, that was a tough loss, too,” he said. “But we watched film, we kept grinding, we kept doubting, we kept tweaking our games.”

Their efforts eventually paid off. The Batang Pier bounced back in a big way, snapping the five-game winning streak of the NLEX Road Warriors, 102-94, last November 13 to keep their playoff chances afloat.

Then on Sunday night, NorthPort scored a 98-96 victory over one of the title favorites Barangay Ginebra San Miguel to barge into the quarterfinals — the third straight time this season that the franchise has entered the next round.

READ  New TNT will live and die by the three, says Jayson Castro

This playoff trip can be attributed to the arrival of Standhardinger, who finished with 17 points and 11 rebounds versus the crowd darlings. However, the 30-year-old big man deflected the credit to his fellow Batang Pier.

“Those are two huge games for us, and I have so much respect for my teammates and I can’t stress that enough,” he said.

With the feat, Standhardinger hopes that this will be the start of NorthPort building that winning culture.

“It’s not only about reaching the finals, winning the championship. It’s about creating and getting the habits of a winning culture here in NorthPort. And I think we’re on a great way to there,” said the well-traveled cager.

“If it’s not enough this conference, I think it will be enough for the next conference. And we just gotta go all out.”

But even if they have made it to the quarters, Standhardinger said that they should not settle.

“I hope we all are not confident and we all just keep grinding, keep working hard. If we do that, we’re on the right track,” he said.

“Like I said, if its not enough this conference, we need to get the habits and we need to work on ourselves to be ready for next conference, and to really build a winning culture. I think that’s one of my main goals when I got here.”

Kemark Carino turns out to be San Beda’s ‘magic bunot’