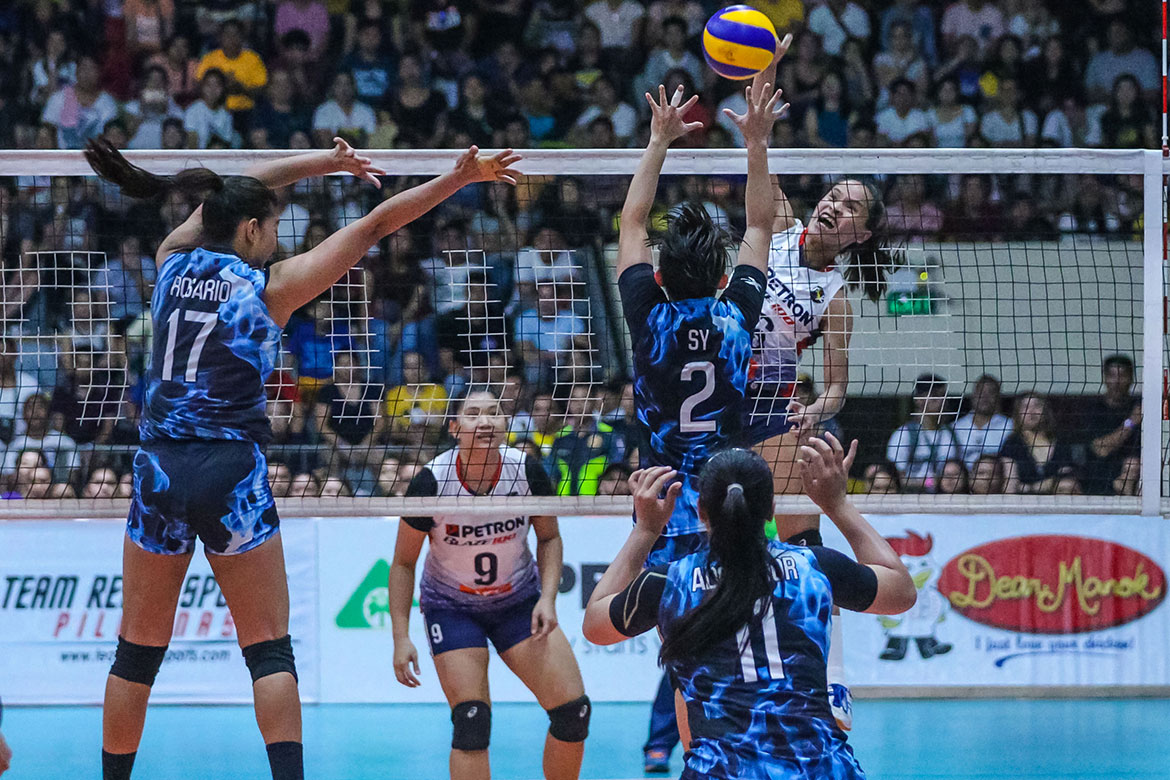 Ripping a page out of its fabled comeback against F2 Logistics last Thursday, Petron once again crawled out of a precarious situation on Saturday.

The defending champions remain perched atop the 2019 PSL All-Filipino Conference standings with a 13-1 card. They also capped their prelims campaign on a high note following back-to-back victories over top contenders.

Momentum swung wildly in the decisive fifth set. When the Tornadoes seemed headed for the finish line, the Blaze Spikers would always stage a resurgence.

Knotted at 13-all, Elaine Kasilag muffed a scoring opportunity, putting Petron at match-point. But Dindin Santiago-Manabat refused to surrender as she hammered the equalizer that brought the match to another deuce — the third two-to-win situation in the game after the uphill battle in the second and third sets.

From that point onward, a back-and-forth affair ensued, as Mika Reyes and Sisi Rondina provided crucial hits while Santiago-Manabat kept Foton in pace with Petron.

The Blaze Spikers, however, prove to have the stronger finishing kick down the stretch.

In a 17-all deadlock, Rondina nailed a through-the-block hit that buoyed Petron at another match point. Bernadeth Pons then soared in the ensuing play, uncorking an airborne attack to ice the game for good.

Ces Molina and Mika Reyes also played instrumental roles in their escape act. The former had 13 points spiked by two aces while the latter stymied the opposition with four blocks for 13 markers as well.

Pons pummelled all of her 12 points from the attacking department. Meanwhile, Denden Lazaro protected the floor with 22 excellent digs and 13 excellent receptions. Cherry Cortez, who provided the energy off the bench, managed eight markers.

Rhea Dimaculangan dished out 30 excellent sets to put all but one attacker on the scoring column. She also notched two points.

The Tornadoes had a chance to dispatch the Blaze Spikers in the fourth set, but the latter yet again displayed composure and fought tooth-and-nail. Foton took a slim two-point breather at 21-19 but the duo of Rondina and Pons lifted Petron once again to snatch the set in come-from-behind fashion and forge a decider.

The Tornadoes fell to a 7-6 slate — tied with Cignal at the fourth and fifth slots.

Santiago-Manabat also had an offensive onslaught of her own. She put up 31 points — a point shy of Rondina’s output — off 28 attacks and three rejections, all the while contributing on defense with 16 excellent digs.

Foton seeks to regain its winning ways when it takes on the win-hungry Marinerang Pilipina on Tuesday at the Malolos Sport and Convention Center.