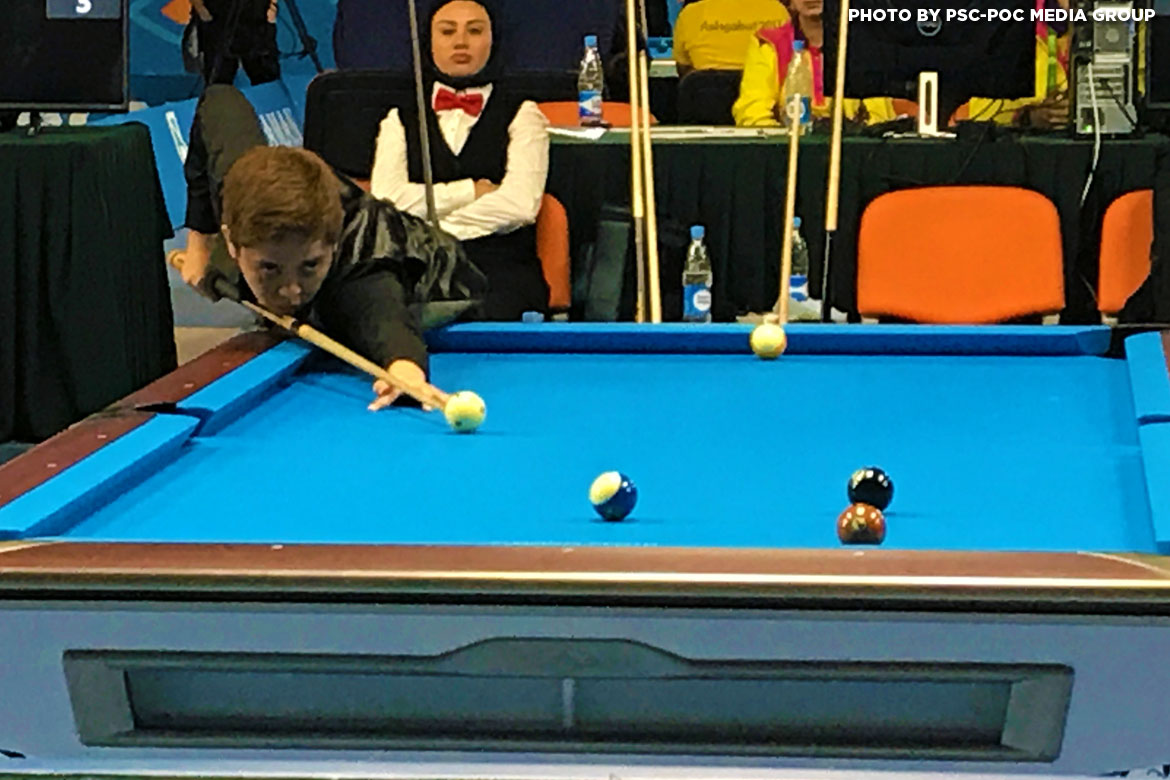 Rubilen Amit advanced to the semifinals round following her 7-1 win over Iran’s Parisa Mangli in the quarterfinals of the women’s 10-Ball Pool singles in the 5th Asian Indoor and Martial Arts Games (AIMAG), Monday at the Ashgabat Olympic Complex here.

Amit, 35, who hails from Mandaue City, Cebu, quickly grabbed a 5-0 advantage, before Mangli won the sixth rack off an her error.

That was the only game Mangli won, however, as Amit took the next two racks to win the race-to-seven encounter and secure a spot in the semifinals, where she will meet Taiwan’s Wei Tzu-Chien.

Wei edged Lim Yunmi of South Korea, 7-2, in the quarterfinals. The semifinal is scheduled in the afternoon. The other semifinal match will pit China’s Chen Siming and Taiwan’s Chou Chieh-Yu.

The 10-Ball World Championship winner in 2009 and 2013, Amit has assured herself of a bronze medal with her win, which matches her podium finish during the 2013 AIMAG in Incheon, South Korea.

With the latest medal from Kiamco and Chua, the country now has a medal haul of two gold medals courtesy of Jiu-Jitsu fighters Margarita “Meggie” Ochoa and Annie Ramirez, 10 silvers and 11 bronze medals.

Kickboxer Robin Catalan lost to Hamza Abughazleh of Jordan, 2-0, in the quarterfinals of the men’s low kick -51kg despite leading in the first two rounds of their three-round encounter.

Wrestler Grace Loberanes missed out on a medal after Sheetal Tomar of India scored a 2-0 win in the repechage of women’s freestyle -48kg.

The national team dancers will try to add to the medal count as action starts Monday in Dance Sports.

Despite missing out on playoff incentive, Yeng Guiao and NLEX will continue to dream