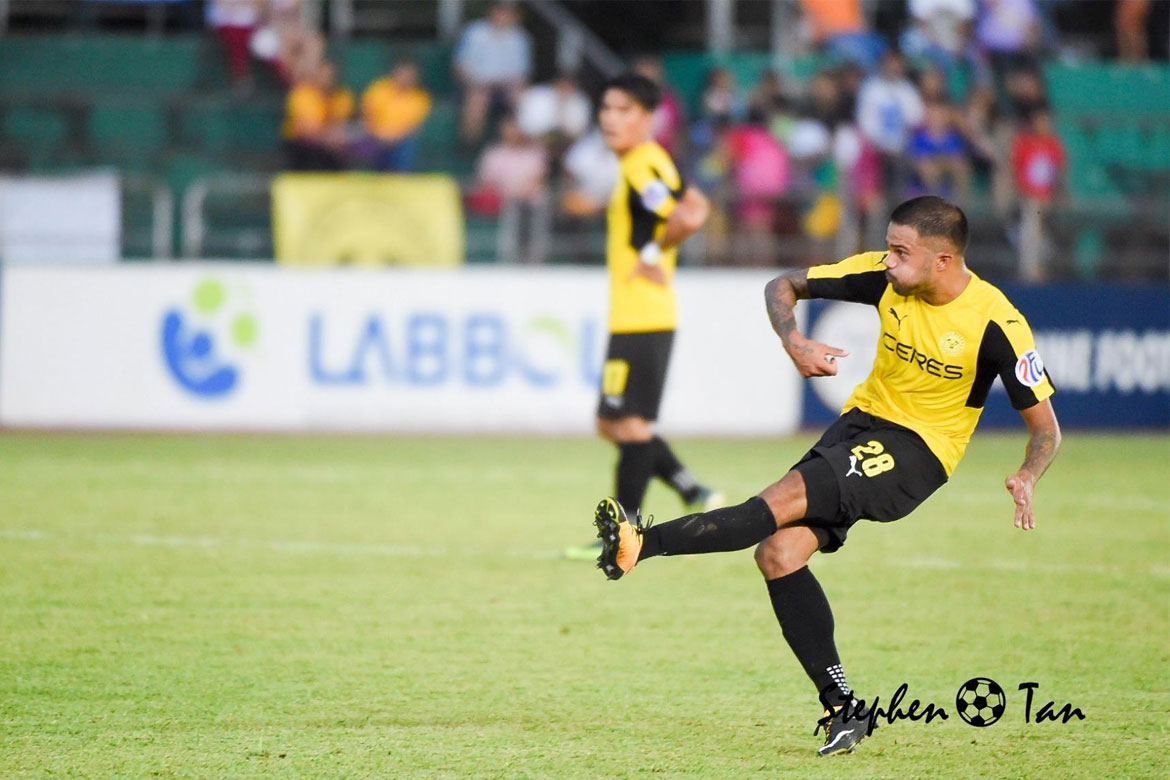 The Philippines Football League was in full swing this weekend, as all eight teams figured in action. There weren’t plenty of goals across the four games, but it wasn’t an uninteresting weekend, as the race for the playoffs continues. Here’s how the latest match week unfolded:

Ceres-Negros turned up the heat in their most recent game in the league as they whipped Davao Aguilas, 3-1, Saturday afternoo, in a match that was played in Rizal Memorial Stadium due to the unavailability of Davao’s grounds in Tagum.

THis is the first time Risto Vidakovic’s side have played in the PFL since their record-shattering defeat to Meralco late last month, and they guaranteed themselves a bright restart to the league following a humbling experience against Istiklol in the AFC Cup.

The Busmen took 19 minutes to break the deadlock courtesy of Fernando Rodriguez. The Spaniard brilliantly finished a play that began with Manny Ott and Bienvenido Marañon, with the number nine making the move to meet Jeffrey Christiaens’ well-placed cross into the box. It was a justification of the game’s tempo as the Negrenses controlled the opening exchanges.

More chances came for Ceres, as the likes of OJ Porteria and Stephan Schröck caused problems to the Davao backline only for Marko Trkulja to keep them out. Withstanding another barrage from the Visayans, Davao missed a gilt-edged chance to punish their opponents, who had committed a rare defensive mistake. Phil Younghusband would have made it 1-1 had it not been for Roland Müller’s impressive stop 17 minutes before the break.

It stayed 1-0 after the first half, but Rodriguez knew he should have made it two. A sorry miss from close range off a Schröck delivery in the 36th minute was a let-off for the Aguilas.

His compatriot, Marañon, made sure Rodriguez wouldn’t dwell on the mishap in the first half, as he tucked the ball into the back of the net in the 50th minute. A well-worked play by Porteria allowed Bienve the chance to beat Trkulja for some much-needed breathing space against the pesky Aguilas.

The Spanish duo asked more questions of the Davao defense, with many sensing that at least one of them would get another goal. Towards the end, it was Rodriguez who claimed the brace when he was located brilliantly by Christiaens. With three minutes to spare, the Ceres striker capped the game off with a clinical finish.

Just like in their loss to Global in midweek, Davao got a goal late in the match through Harrison Sawyer. The Australian forward produced another consolation goal off a set piece.

With the win, Negros are now back in the top four spots, overtaking JPV-Marikina. Already with 28 points in just 13 matches, Ceres have plenty of games ahead of them and, should they win most of those, stand a good chance of going well past Meralco-Manila for the top spot.

Jesus “Jhan-Jhan” Melliza and Stallion-Laguna just keep getting better and better approaching the business end of the season, as they record their fourth consecutive victory in a 1-0 decision against JPV-Marikina in Biñan.

Melliza, leading the goalscoring charts this season, had the telling touch in the 77th minute of the game to sink JPV-Marikina for the third time in the league. Suffice to say it was a difficult game for both sides, as neither wanted to let the other gain ground on them.

The result, in the end, may feel a bit harsh for Voltes, who were not without good chances to test the hosts. They held the ball 54% of the time in order to produce 10 shots, 5 of which were on target.

But no Marikeño produced a finish good enough to breach an increasingly confident Stallion defense. Throughout their last 450 minutes played, the Laguna team only allowed two goals. With key games against Global and Kaya coming up, Stallion’s current form is definitely encouraging.

Their sturdiness at the back was augmenteed by Melliza’s resurgent form in front of goal. Once a talisman for Green Archers United, he has now scored 13 goals in the league, with five of those coming in the last two games. If Stallion-Laguna would take some stopping, opposing defenses will have to keep the FEU alum quiet or run the risk of falling victim to the Stallion juggernaut.

As a result of Melliza’s strike, Stallion are now just four points off the playoff places, albeit playing more times than most teams. A playoff spot looked far-fetched around two months ago, but it is certainly within reach now. As for JPV-Marikina, their days of topping the league looked like centuries ago as they fell to fifth in the standings, just two points ahead of Stallion.

In a top-of-the-table match, no team wants to give the other an opportunity to progress at their expense. Hence, the match between league-leaders Meralco-Manila and Global-Cebu concluded quite unsurprisingly in a 0-0 draw Saturday afternoon at the Cebu City Sports Complex.

Having been a fortress, the Cebu City Sports Complex hosted six games prior to Meralco’s visit this weekend. Out of the six, Global managed to triumph on four occasions. Throughout that spell, the Cebuanos also held firm on defense, as they have only conceded at home this season.

Meralco entered the match with their sights on shattering their opponents’ invincibility at home. After all, they were also the ones who had ended the dominance of Ceres-Negros at Panaad earlier this season. If there was a team that could do it in Cebu, it would be the Sparks.

They looked more dangerous on the ball early on, and could have had a goal or two to show for it. Tahj Minniecon was denied by Patrick Deyto in what was the best chance of the first half.

Conditions in the second half were no better as rain made it trickier for both teams to play football. It actually aided attacking players more than their defensive counterparts as the slippery conditions presented multiple opportunities for each team capitalize on.

#ReadMore  Conference full of hope ends in another exit for Uichico, TNT

Unfortunately, neither managed to convert any of their shots within the 90 minutes. In the earlier part, Meralco appeared to be more threatening while Global stepped on the gas in the final minutes hoping to catch their exhausted foes off guard.

In the end, the points were shared perhaps pleasing Aris Caslib’s Sparks more than Akbar Nawas’ side. Manila are now seven points clear of Cebu, sitting in second, with 34 points. The Sparks can also add more, as they have a game in hand vis-à-vis Global.

A Jordan Mintah header 34 minutes into the match turned out to be the difference between lowly Ilocos United and play-off contenders Kaya-Makati, as the latter left the Quirino Stadium with three more points in the bag courtesy of a 1-0 win yesterday afternoon.

The Makati club dominated proceedings and were mostly hindered by their inability to convert chances into goals. While Mintah got himself to the scoresheet, the likes of Robert Lopez Mendy and Jovin Bedic failed to join him as the resolute Ilocos defense somewhat executed a plan to limit Kaya’s danger men.

Ultimately, it boiled down to a quality of finishing, which still needs improvement according to Coach Noel Marcaida. “The game looked tough because we kept on missing goal scoring opportunities. I think we could’ve finished the game as early as the first half if we finished all our chances,” Kaya’s mentor reckoned.

Nonetheless, Kaya-Makati dodged a banana slip against one of two teams still without a win in the PFL. In doing so, Kaya-Makati regained the third spot they had temporarily lost to Ceres-Negros and consolidated their grip on a playoff spot.

Two mouthwatering ties are due this midweek. A repeat of the clash at Rizal Memorial is on the cards, as Davao welcome Negros in their Tagum home turf on Wednesday afternoon. Later that day, Global will entertain Stallion at home, hoping to avenge a 2-1 loss they endured to the Laguna outfit last month.