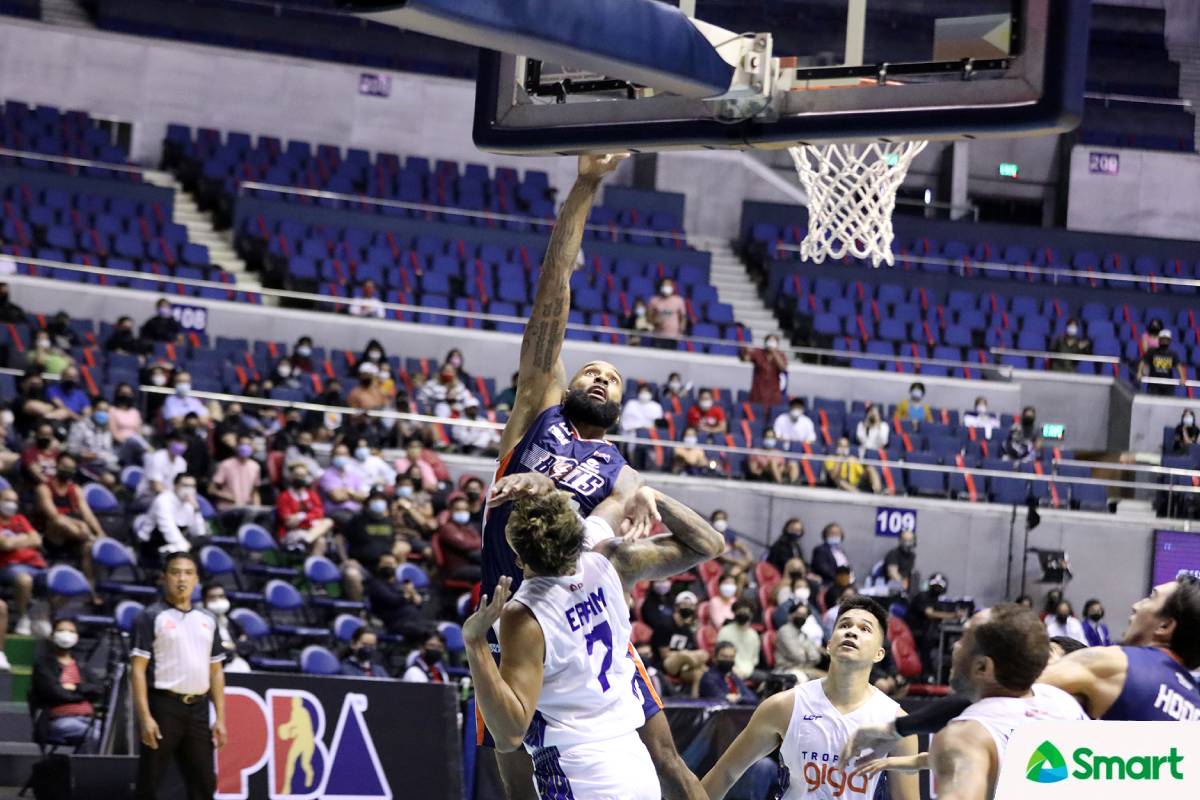 Tony Bishop was the closer Meralco needed to sneak past TNT, 83-80, to collect its second win in as many games in the 2021-22 PBA Governors’ Cup, Wednesday evening at the SMART Araneta Coliseum.

The Panamian cager finished with 36 points and 17 rebounds, together with three assists and a steal in over 41 minutes as he came through down the stretch to once again prove his worth to the Bolts.

He broke the 76-all deadlock with a big three-point play conversion off a Poy Erram foul with 2:59 remaining, giving his side the lead for good.

And when the Tropang Giga came knocking close, the 32-year-old was there to foil their hopes. He secured teammate Cliff Hodge’s missed jumper with 11 seconds to go, and immediately dished it outside to Chris Newsome.

Newsome went on to split his free throws with 9.1 ticks left, and the Bolts went on to escape with the three-point victory.

“Another good game for Tony. I mean, he stepped up and made some big plays for us, none any bigger than the offensive rebound at the end of the game,” lauded head coach Norman Black of his import.

“When we missed the shot, we were able to get the ball back and that gave us a chance to basically run the clock out and control the game. After two games, he’s done very, very well. And I’m certainly happy with his play.”

Newsome had 15 points and five rebounds in the victory, which helped Meralco gain a share of the third spot of the standings with Magnolia.

Allein Maliksi added 10 points while center Raymond Almazan contributed 10 rebounds and five markers for the Bolts, who actually led by as many as 10, 54-44, with 6:53 to play in the third quarter before TNT’s fightback.

“It still came down the stretch, still it was a close game but we made the plays we had to make to win the basketball game,” said Black.

Meralco will now head into a holiday break before returning to action against Alaska on January 5, 2022 at 6:00 p.m.

Meanwhile, RR Pogoy led TNT with 25 points, though he wasn’t able to finish the game due to severe cramps after playing for 41 minutes.

Mikey Williams supplied 24 points, while Jayson Castro added 16 in 32 minutes. The locals had to pick up the slack once more, as the injured McKenzie Moore only had four points on 2-of-9 shooting and seven rebounds.

The Tropa actually had a chance to tie the game in the last nine seconds, but Kelly Williams missed the three-pointer at the buzzer.

TNT has now absorbed its second loss in three outings. But it has a shot to bounce back versus Rain or Shine on Sunday at 6:45 p.m.