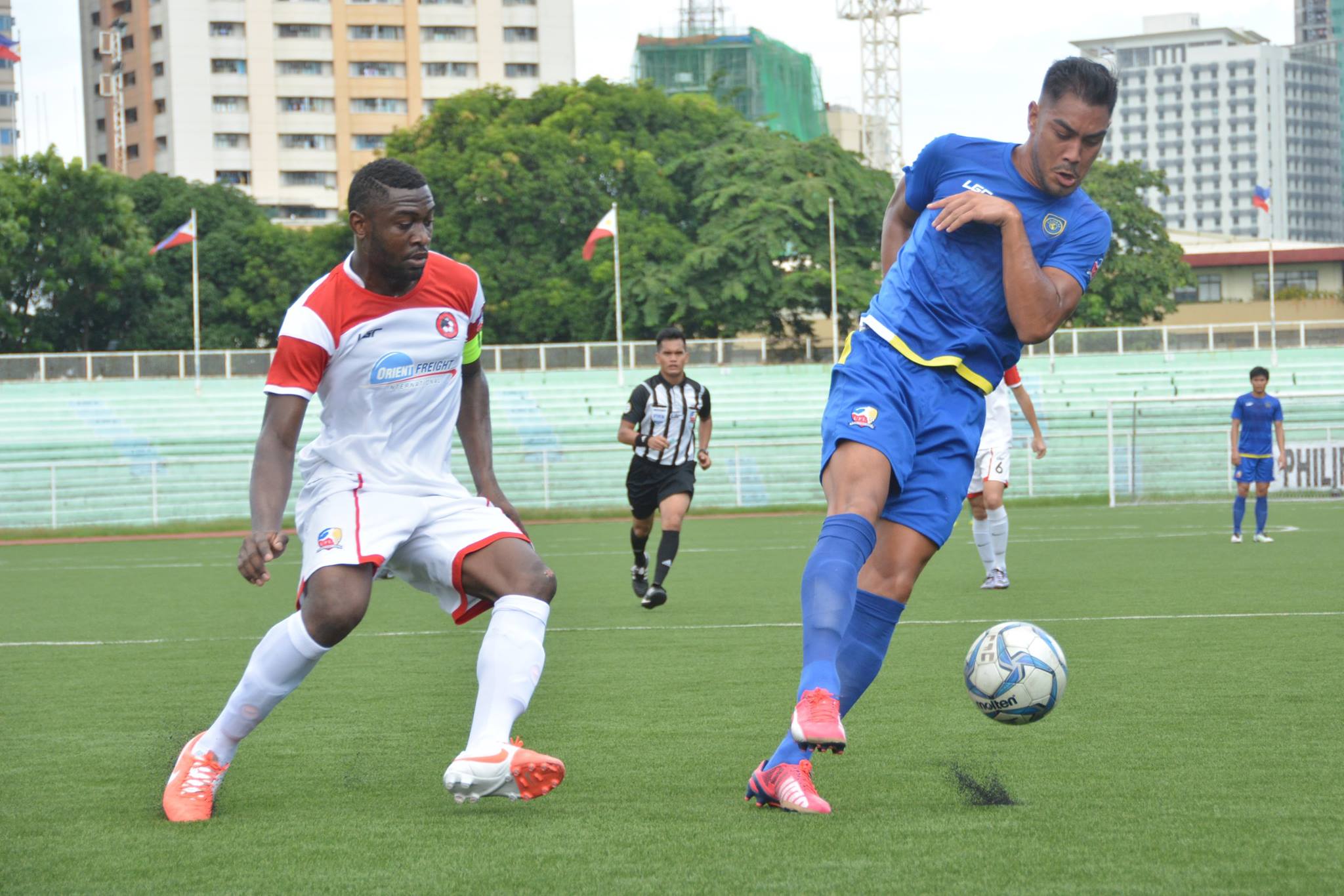 In an unexpected turn of events, Global FC were made to fight for their sixth consecutive win against a surprisingly stubborn Forza FC.

As expected, the league leaders dominated the possession early in the first period. Most of this possession turned into chances, only for Forza’s goalkeeper Abu Ibrahim to collect these opportunities. In the sixth minute, nevertheless, one of the innumerable shots breached Ibrahim’s guard. Hikaru Minegishi found himself unmarked inside the penalty area, but instead of shooting, he laid the ball for Nazari. The striker then smashed the ball past Abu for the opening goal.

Several opportunities for another goal went Global’s way, but their finishing failed them. Ibrahim likewise stood his ground in the first half, denying shots from Minegishi and Amani Aguinaldo. On the other hand, Forza could have equalized just before the interval had Aldrin Dolino just found the goal mouth.

On his interview, Global FC Head Coach Leigh Manson shared his disappointment with how his team had played in the opening half. He said, “That is the worst first half we played this season.” So adjustments were made, and the coach put in Paolo Salenga up top for finishing.

Global FC resumed the grind-out battle against Ibrahim and the rest of Forza FC. With most of the action happening in the white-shirts’ half in the second period, the People’s Club repeatedly probed into the opponent’s backline.

UAAP standouts Paolo Bugas, Salenga, and OJ Clarino proved their mettle in the succeeding minutes of the following half, but once more Ibrahim saved the day for Forza. Even fellow UAAP stalwart Noel Brago joined the denial party for the home side, as he stopped Global’s attacks successively.

Just one defensive lapse from the compact Forza defense was all Global needed to keep their unblemished record intact. In the 74th minute, former UST Captain Clarino found Nazari to his support and sent a ball inside the box. The goal scorer then guided the advancing ball into the goal to complete his brace and put Global on top with a more comfortable 2-0 lead.

Salenga tried to add more to the tally, but his shot off a Bugas’ delivery sailed over the bar. Nonetheless, Global took their sixth straight win and stayed three points clear of fellow matchday winners Kaya FC and Ceres-La Salle FC.

Despite the win, Manson still shared that, “We need to work on our finishing.” Global took 23 shots, and 16 of them were on target. Of the 16, only two of Nazari’s shots went past Ibrahim.

Earlier in the day, Kaya FC survived a gritty stand from Pasargad FC, 6-0. Robert Lopez-Mendy registered another hat trick after scoring in the 48th, 56th, and 77th minutes. A 19th minute strike from last game’s Man of the Match Miguel Tanton started the ball rolling for the 2015 Cup champions.

Erstwhile former Tiger Shirmar Felongco found the back of the net to put Kaya on top at 3-0, a minute before halftime. Anton Ugarte scored in between Lopez-Mendy’s second and third in the 63rd minute.

It could have been another worse for Pasargad if not for keeper Albert Llevares. The former UST guardian joined his fellow Thomasian alumni’s breakout games, as he denied 20 of the 60 shots on target for Kaya.

Global FC will fly to Singapore to continue their Singapore Cup campaign, and will face Agila MSA FC upon their return on July 5, Tuesday. The kickoff is set at 4pm. Meanwhile, Kaya FC will battle Agila MSA first this Wednesday, June 29 at 4pm.

Pasargad FC will take on Stallion FC on Sunday, July 3 at 4pm, while Forza FC will test their mettle against Laos FC the day before at 1:45pm.

Up to the rafters: Kobe showered with appreciation in special night