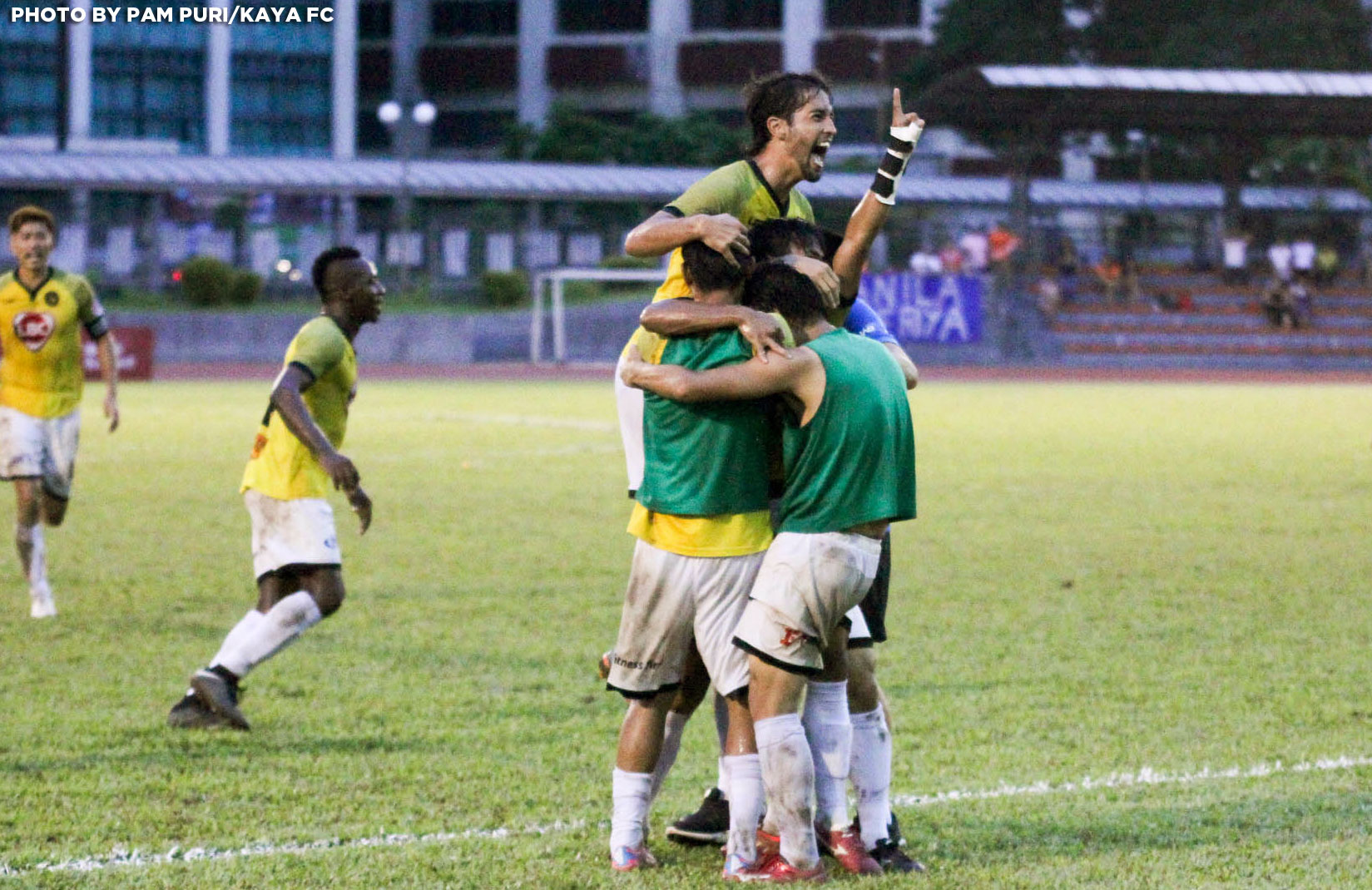 The home sides were looking to claim huge scalps as they plot to make the race for playoff spots more interesting. The away teams, meanwhile, plan to rack up as many points as possible approaching the home stretch of the season.

Results mean so much more at this part of the season so the desire of all teams in contention will be put to the test.

Kaya-Makati picks up valuable win away against Davao Aguilas

Kaya-Makati tightened their grip on second place after securing a 2-0 win against a tricky Davao Aguilas side yesterday evening at the Davao del Norte Sports Complex in Tagum City.

Jordan Mintah and Miguel Tanton were in amongst the goals as the Makati side set themselves up with a crucial rivalry duel against FC Meralco-Manila this coming Saturday.

The score did not reflect how straightforward the occasion was for the visitors, whose early dominance in the encounter was nearly nullified by a decent Aguilas opportunity. Former Meralco-Manila star James Younghusband had a decent glance on goal but his effort drifted over the frame.

Dodging a bullet, Kaya-Makati went to look for a goal before the break to help settle their nerves. After multiple thwarted attempts, Noel Marcaida’s wards got what they were searching for thanks to Mintah. The forward who hails from Ghana towered above everyone else to head the ball in. His initial effort was blocked but he was at the right place at the right time to make no mistake in the rebound. The glorious moment put Kaya-Makati in front, 1-0, right before halftime.

“I think the difference of the game is my players really switched on and stayed sharp when it comes to set pieces defensively and offensively. That’s why we got two important goals from set pieces,” Marcaida highlighted after the match.

Indeed, the second goal came from a free kick. At the hour mark, Tanton stepped up to take the set piece just outside the penalty area. Given the opportunity to strike from around 20 yards, the Kaya midfielder did not waste his chance to impress the crowd while also collecting a vital goal. His top corner strike made it a bridge too far for the Aguilas, who were fortunate not to lose by more.

Tanton actually could have had his brace late in the game, but his screamer from 25 yards was disallowed due to an offside infraction leading to the shot. It did little to dampen the mood of the away team who are now just a point behind the Sparks, a team they will meet on Saturday.

Fine displays on both ends of the pitch rewarded Stallion-Laguna their first win against Ceres-Negros this season when they recorded a 2-0 win yesterday afternoon at the Biñan Football Stadium.

Gabriele Mascazzini and Ruben Doctora Jr. bagged a goal each with Benito Rosalia also claiming a deserved clean sheet following his stellar performance that shut down the potent Ceres attack. A red card issued to Nicholas Ferrer Jr. late in the game may be the only bad thing to note for the hosts who moved to fifth in the standings.

Early in the game, Rosalia got on top of the things by making routine saves to deny Jeffrey Christiaens and Omid Nazari. His counterpart, Ceres’ Roland Müller, was not idle also as he was prepared to deal with Mascazzini’s strikes.

At 0-0 approaching the final 10 minutes of the half, the cagey affair looked set to be opened up. Fortunately for the hosts, they have their keeper to thank for as he stood out once again to prevent the visitors from taking the lead.

Iain Ramsay’s ball initially missed Stephan Schröck but it eventually found Arnie Pasinabo. The Negrense then directed the ball towards the goal but Rosalia managed to keep it out with an alert stop using his lower limbs. It proved to be a crucial stop as it did not only keep the scores level for it also set up a perfect finish to the half for Stallion.

Already gathering steam following near chances by Nathan Alquiros,Fitch Arboleda and Mascazzini, the home team claimed the breakthrough goal right before the break. They got it through a ck combination of Alquiros’ capability to send good crosses and Mascazzini’s knack for finishing shots from close range. Unmarked upon receiving the ball, the Stallion forward drilled past Müller to give his team a rare lead against Ceres.

Trailing by a goal, the Negrenses played more aggressively on the attack which left them little cover in dealing with counter attacks. Alquiros almost exposed their flaws on defense if not for Müller getting to stop his long range effort just in time. The hosts may have not gotten the insurance goal there but they made sure the next opportunity would count.

Doctora breached past the offside trap to punish Ceres’ defense before the experienced national team forward slotted past the helpless Ceres goalkeeper and making it 2-0 to the hosts with just about 30 minutes left in the game.

The visitors knew by then that they needed to double their efforts if they are to salvage at least a point. Again, it was Rosalia who steadied the ship at the back as his stewardship made the Stallion defense too compact for Ceres to break into.

As time winded down, the tempers of the men in black also rose. A manifestation of this was Schröck’s rash challenge on Ferrer Jr. The former Hoffenheim man drew the ire of the FEU alum who responded to the infringement by kicking the Azkal. The referee held nothing back by issuing a straight red card to the two-time UAAP champion winger. Schröck got booked for his foul while teammate Kevin Ingreso was also cautioned for getting involved in the incident.

Those late cards would render the duo suspended in their next match against JPV-Marikina this Saturday.

Stallion held on to a famous win against the Negrenses despite falling a man down with only five minutes to go.

By negotiating the result, they moved back to fifth in the standings. However, it seems that they won’t be able to finish the season with enough points to make it to the playoffs unlike sixth ranked JPV who still have six more games to play. Laguna only have three matches remaining with fourth ranked Global-Cebu enjoying a six-point buffer. In addition, the Cebuanos are also due to play five more games prior to season’s end.

Nonetheless, it fittingly rewards Stallion for their exploits in the latter half of the season. Another opportunity to win more points will come for the Laguna team when they pay Davao Aguilas a visit this Saturday. 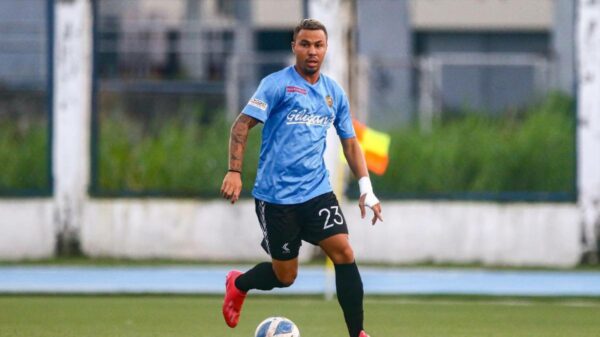 Leo Henrique scored twice as Stallion Laguna enjoyed a 4-0 demolition of Maharlika Manila in the 2022-2023 Philippines Football League, Saturday, at the Binan...