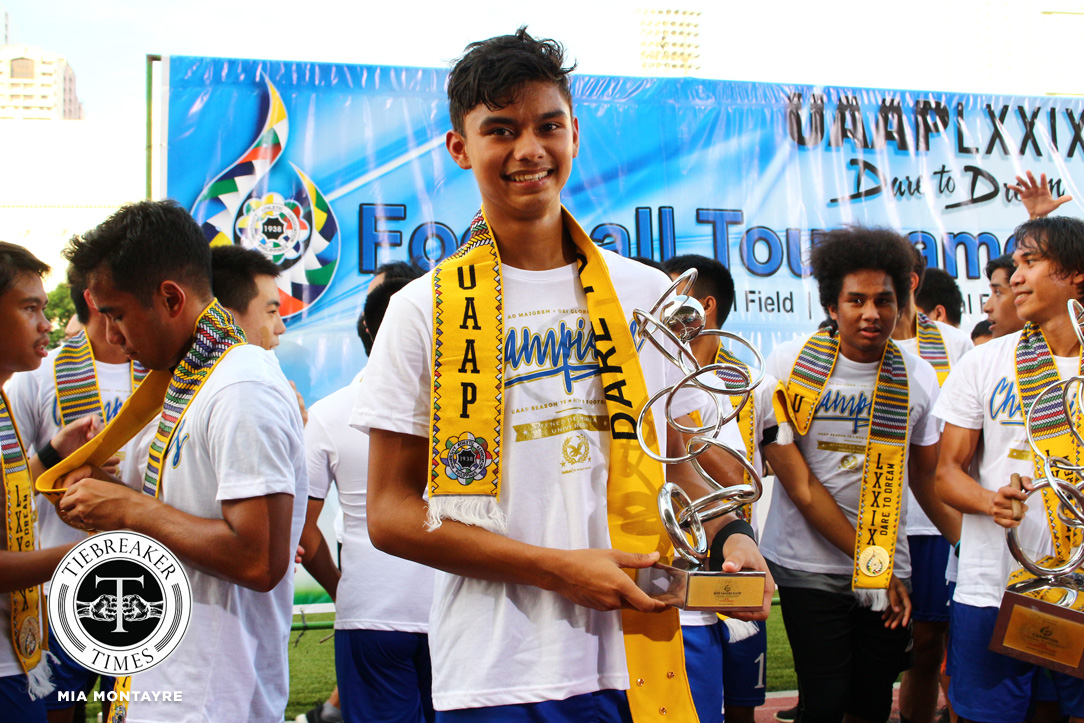 Late in the first half, Ateneo striker Jarvey Gayoso intercepted a pass from FEU midfielder Paolo Bugas and unleashed a powerful shot against goalkeeper Ray Joyel who in turn saved it.

Not to be denied, Gayoso rebounded the ball into the net after 38 minutes of action to hand the Ateneo de Manila University Blue Eagles a 1-0 lead against the Far Eastern University Tamaraws in the UAAP Season 79 Men’s Football Tournament Finals.

That goal ended up as the only one scored in the match, and summed up Gayoso as the alpha and the omega of the Blue Eagles’ sixth UAAP title, as he had scored Ateneo’s first and last goals of the season.

“That was a God-given goal for me. We just utilized and we just made the most of what happened. I’m glad that we’re still given the championship,” explained the striker.

“It’s a beautiful season for Ateneo.”

The Ateneo standout is the grandson of Olympian Ed Ocampo, son of former Brangay Ginebra cager Jayvee Gayoso, and nephew of La Salle and Azkals player Alvin Ocampo. It has been a long time coming, but the Season 79 MVP and Best Striker finally got the championship that has eluded him since his days as a Blue Eaglet.

The former Under-19 national team player shared, “Sobrang overwhelming. I’ve always imagined myself to at least become on top for once and I’m living it right now. It’s an amazing feeling to work so hard and get a lot out of it. It’s actually my fifth finals appearance and my first championship.

“I’ve been consistently second in my entire UAAP career. It feels really good to finally get what we all deserve.”

From being finalists in Season 78, Gayoso and the rest of the Blue Eagles went one better this year. In fact, Ateneo only lost one game during the whole season, with the sophomore student-athlete scoring 12 goals in 13 appearances for the Blue and White.

The BS Management student said, “We had that amazing mentality of the wolf pack, fighting for each other and we had really good recruits, really good rookies. Everybody just wanted it.

“We all had this collective idea of getting that championship. We had a taste of the finals last year and that made us want it more this year.”

With his mission to help Ateneo reclaim the UAAP football title already achieved, Gayoso now seeks to follow his family’s footsteps and play for the Philippines in international competition.

“Definitely I’ll work on my grades first so I can take a leave of absence so I can prioritize the 2017 SEA Games and represent the country,” the third-generation athlete vowed.

Gayoso has proven so much to local football fans two years into his UAAP career. His unlimited potential will no doubt be a big help for the Blue Eagles in the coming years, and also perhaps a stint in the Philippines Football League and Azkals call-ups aren’t that difficult to imagine.

Returning Banchero vows to play better in Alaska’s next outing