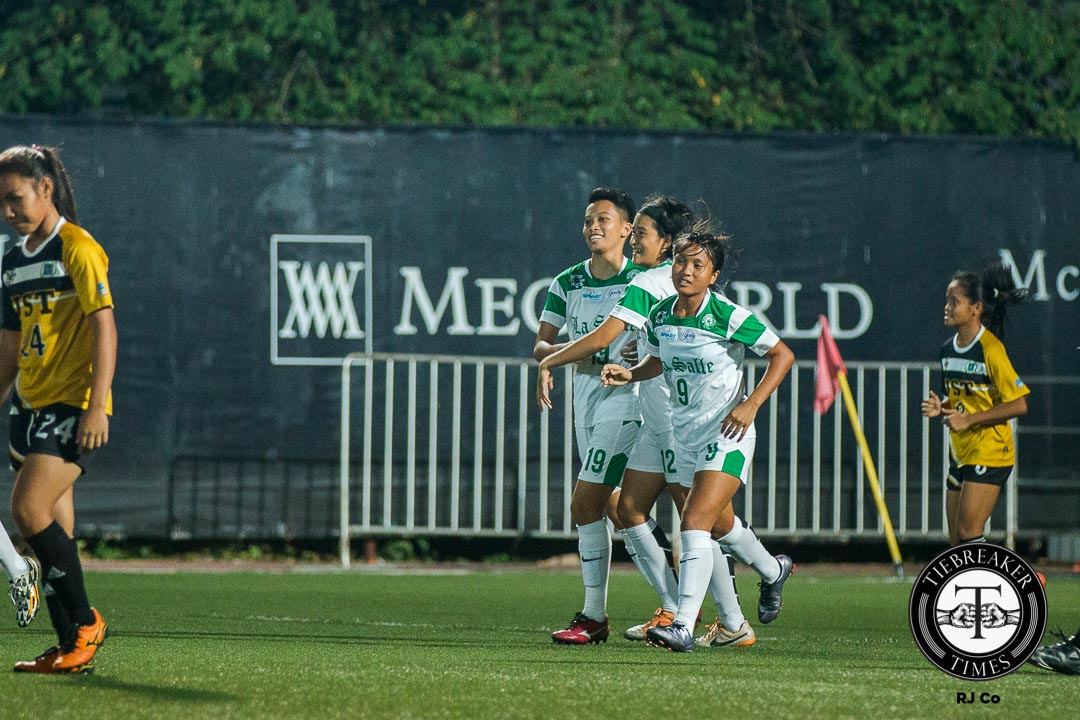 Kyla Inquig (3′) and Shannon Arthur (65′) scored the goals for the Lady Archers while Nina Acuña (90′) pulled one back for the Growling Tigresses, although it was a case of too little too late for UST. The result didn’t make much changes in terms of the league table. La Salle were already through to the Finals before the game and the win gave the Lady Archers 19 points. In contrast, UST were stuck at last place with 4 points.

As mentioned above, La Salle got the lead in the 3rd minute of the match. Kyla Inquig scored a wonderful header before which the ball was crossed to her by fellow striker Arthur. Unlike the past encounter between the two teams, though, UST played better and capitalized on La Salle’s uncharacteristic shaky backline when Lady Archers goalie Inna Palacios made consecutive saves against Mae Cadag and Charisa Lemoran.

While momentum was with La Salle, the Lady Archers failed to add to their tally before halftime. Nicole Andaya and Sara Castaneda had attempts on goal, yet both failed to score. Afterwards only the crossbar denied Inquig from doubling La Salle’s advantage after a good free kick by Castaneda. The Lady Archers deservedly led, 1-0, against the Growling Tigresses at halftime.

It was a more even game in the second half as La Salle and UST were searching for the game-changing goal. UST goalkeeper Ivy Lopez was forced to make a good saves from Inquig and Irish Navaja while Cara Corpus and Chanda Solite failed to hit the target at La Salle’s end. Inquig then had another go, only for her lob to be too strong for it to be on target. At the 65th minute, however, La Salle finally doubled their lead after Arthur unleashed a powerful shot from her free kick.

Not to be undone, UST tried to respond once the game restarted, but Lemoran and Jennizel Cabalan failed to score when given the chance. The Tigresses finally got the goal they deserved at the 90th minute and Acuna’s strike. That was the final action of the match, though, as the referee called for time moments later. The match ended, 2-1, in favor of La Salle over UST.

In spite of the win, La Salle head coach Hans-Peter Smit was exasperated with his team. Smit said, “I’m not happy at all. I told the for the whole week that we’re preparing not for UST, not for FEU. Regardless if we win or we lose these last two games, it doesn’t matter. We’re in the Finals. I told them we’re gonna be prepared. We’re have to play for our May 5 Finals. I gave chances to my bench (players), they didn’t perform. Now I only have a few players to play for the (Finals).” Smit then added that he felt his players didn’t follow his instructions in the game and that he’ll be forced to rely on his starting eleven unless something drastic happens. “I’m sick and tired of being a bridesmaid”, he concluded.

Saturday (April 23, 2016) will be the final matchday for both teams. La Salle takes on Far Eastern University (4:00PM) at the earlier game while UST will face Ateneo hours later (7:00PM). McKinley Hill Stadium will be the venue for the games.