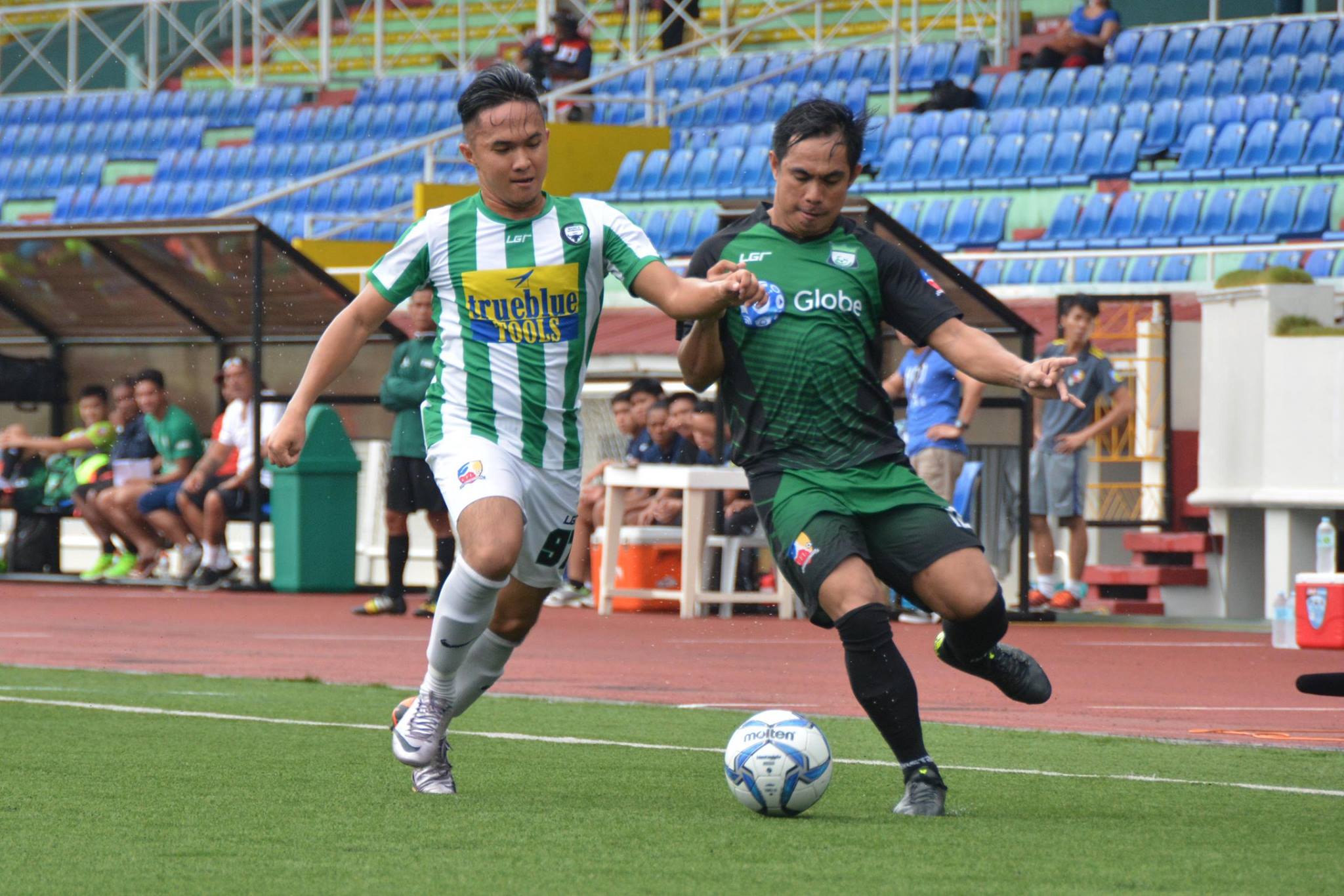 Top-flight squads JP Voltes FC and Green Archers United FC posted contrasting wins against their respective opponents to keep in step with the leaders at the 2016 United Football League, Sunday at the Rizal Memorial Football Stadium.

In the first game, JP Voltes FC routed Agila MSA FC, 5-0, and secured their fourth win of the League.

Japanese strikers Takumi Uesato and Takashi Odawara proved dangerous early on as they got early chances to score. Odawara then finished his second opportunity and broke the deadlock with a powerful strike at the ninth minute.

Five minutes later, Uesato doubled the lead for JP Voltes FC. The striker intercepted the ball off Agila’s defense, drove towards the goal, and blasted a shot past goalkeeper Kenneth James.

Sensing some urgency, Agila MSA looked to get one back with Christian Castillo and Jarvey Gayoso. However, the two were denied of their chances. JP Voltes’ keeper Nelson Gasic collected Castillo’s attempt, before Gayoso was called offside on his run on the flank.

At the 28th minute, the away side got their third goal of the match. A corner kick from Yu Hoshide found Uesato, who headed the ball into the goal, for the latter’s own second goal and push their advantage at the break.

JP Voltes dominated the possession in the second half as they closed out the passing lanes of Agila MSA. After several good runs and hard cuts into the attacking third, Odawara finally broke the silence and got his brace. Uesato whipped a cross into the penalty area at the 73rd minute, and Odawara finished it off with a spectacular volley.

Substitue Alen Angeles put on the finishing touches in the win at the 87th minute after scoring off a Yu Hoside’s delivery.

Former National University stalwart Nico Macapagal started the ball rolling in the match with the breakthrough goal for Green Archers United. Macapagal lost his marker to collect a pass from Gi Won Nam and chipped the ball into the goal from a tight angle.

With Stephen Appiah in charge, Nomads mounted several attempts to score. At the 18th minute, GAU keeper Henri Bendeken Fong just denied Appiah the equalizer. The Ghanian then involved his teammates to get that tying goal. After some good build up play, Kevin Biñas finished it off with volley past Bendeken Fong to put the game back on level terms at the half.

In the second half, both teams searched for the lead, only the opposing defense were able to deny their attempts. This back-and-forth action finally produced a goal at the 54th minute. Appiah once again had his run towards their final third and then connected to Hwang Jong Won, who found the back of the net for the 2-1 lead.

Two minutes after, GAU’s Willliam Ebanda stopped Appiah on his tracks, but the former was called for a foul inside the box. The Ghanian striker then calmly sank the ensuing penalty kick to put Nomads ahead at 3-1.

Just as when Nomads put their guard down, GAU regrouped and made adjustments on their game. With Hossein Doustdarsefidmazgi and Chieffy Caligdong now on the wings, the visitors had chances to slowly creep back in the game.

Head Coach Rodolfo Alicante shared, “Our offense and defense were disorganized. I told them to organize and they did just that.”

The adjustment paid off and Doustdarsefidmazgi finally broke his own scoring drought to cut the deficit to one, 2-3. In an ensuing corner kick, Caligdong sent a dangerous ball into the box, which the Iranian nodded past Nomads’ keeper Joshua Cruz.

Five minutes after, GAU carved a chance to equalize with five men racing down the pitch against three Nomads players. However, instead of playing advantage, Macapal was called for a foul and was booked for warding off his defender. Green Archers United’s captain Chieffy Caligdong protested the call of referee Aldous Mirafuentes and was likewise given a yellow. Caligdong’s dissent did not stopped forcing Mirafuentes to send the former out with a direct red card.

The incident might have just fuelled GAU back in the game. At the 71st minute, Gelo Diamante just missed on the equalizer after Cruz gathered his shot. Five minutes after, Alvin Sarmiento was taken down in the midfield but referee Mirafuentes continued the play. After a scuffle inside the black-shirts penalty area, Nomads cleared the ball, but only past Sarmiento who was finally up. The defender met the ball and struck it through the defense and into the goal to level the game once more.

At the 80th minute, Nomads and GAU became level not only in the scoreboard, but also in the field. Goal scorer Biñas was sent off for a second yellow after a strong challenge.

With the game hanging in the balance and reaching its eleventh hour, Green Archers United turned things up. Center back Ebanda joined his forwards up front in one of their runs into the attacking third. Sebastian Gonzales denied Ebanda on his run, and was called for the foul and conceded a penalty. The GAU defender made amends on his own conceded penalty and converted on the spot kick to put his team up once again at 4-3.

That turned out to be the last chance of the game, as Green Archers United denied Nomads another goal and the spoils.

Alicante felt bad with the officiating in this game, but quick to dismiss that they had to continue playing. He was pleased that his wards responded to the adjustments. Alicante said. “I think we played organized in the last 20 minutes.”

Winners JP Voltes FC and Green Archers United FC attempts to continue this winning run when they face each other on Wednesday, June 29 at 1:45pm. Agila MSA FC, on their part, battles with Kaya FC at 4pm of the same day. Manila Nomads SC takes on the other match day winner Loyola Meralco Sparks FC Next Sunday, July 3 at 1:45pm.

Jalalon, Arellano may have found their big man