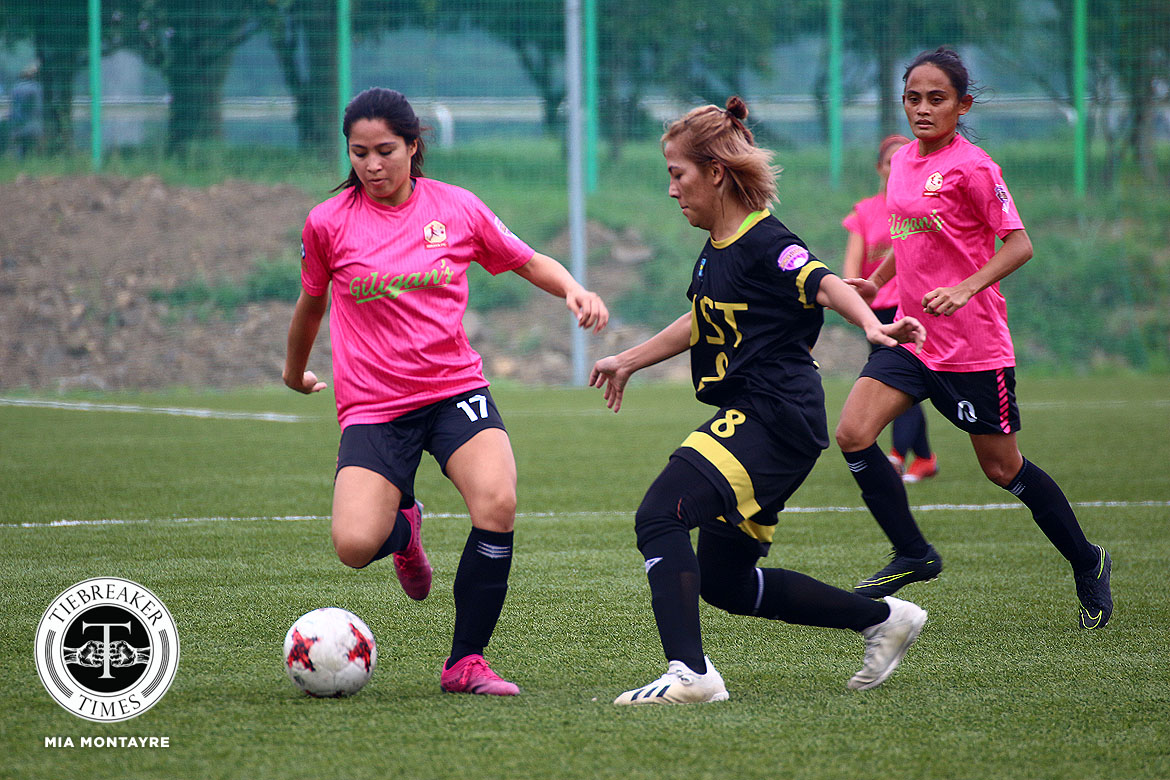 Club team Stallion-Hiraya FC continued to impress after extending their unbeaten streak to 10 with a 6-1 beatdown of Tigers FC.

Aiza Mondero opened scoring in the 17th minute before being joined by Loreta Ladero (34th and 90th minutes), Erika Casas (51st minute), Jennizel Cabalan (62nd minute) with team veteran Natasha Alquiros capping it off with an 80th minute goal. Lovely Fernandez pulled the deficit back in the 53rd minute for Tigers.

“The positives of having older players is that they’ve played for a long time so there’s a high football IQ. We’re more confident or calmer on the ball. What we don’t make up for in speed we make up for in football IQ and being able to keep the ball,” said Alquiros. 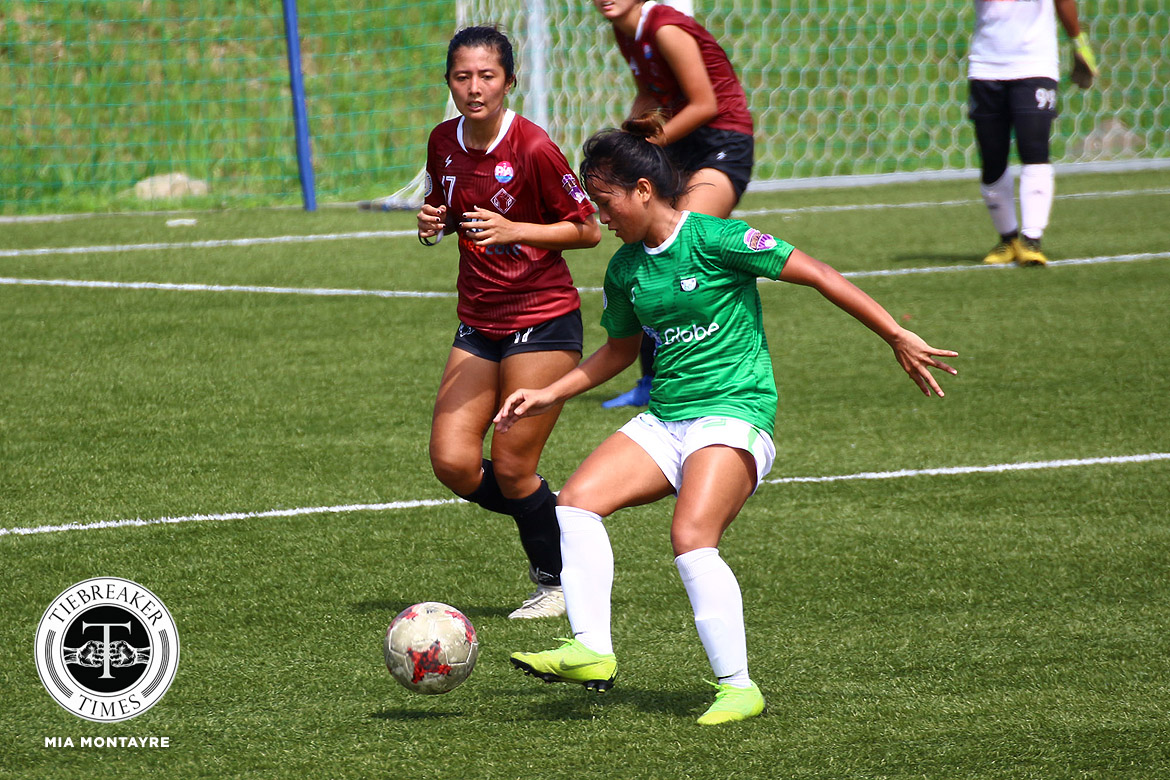 Player absences have been hobbling Green Archers United FC all season long but plenty showed up for a 4-1 victory against Maroons FC.

Fresh off national team duties, an inspired Irish Navaja netted her first goals for the club in the 19th and 55th minutes. Kyra Dimaandal also slotted in her first for GAU in the 28th minute, before Marinelle Cristobal added another with two minutes left on the clock. Martina Torres provided consolation for the Maroons with a strike in the 63rd minute.

DLSU’s Teves, Castañeda double up to keep Tuloy at bay 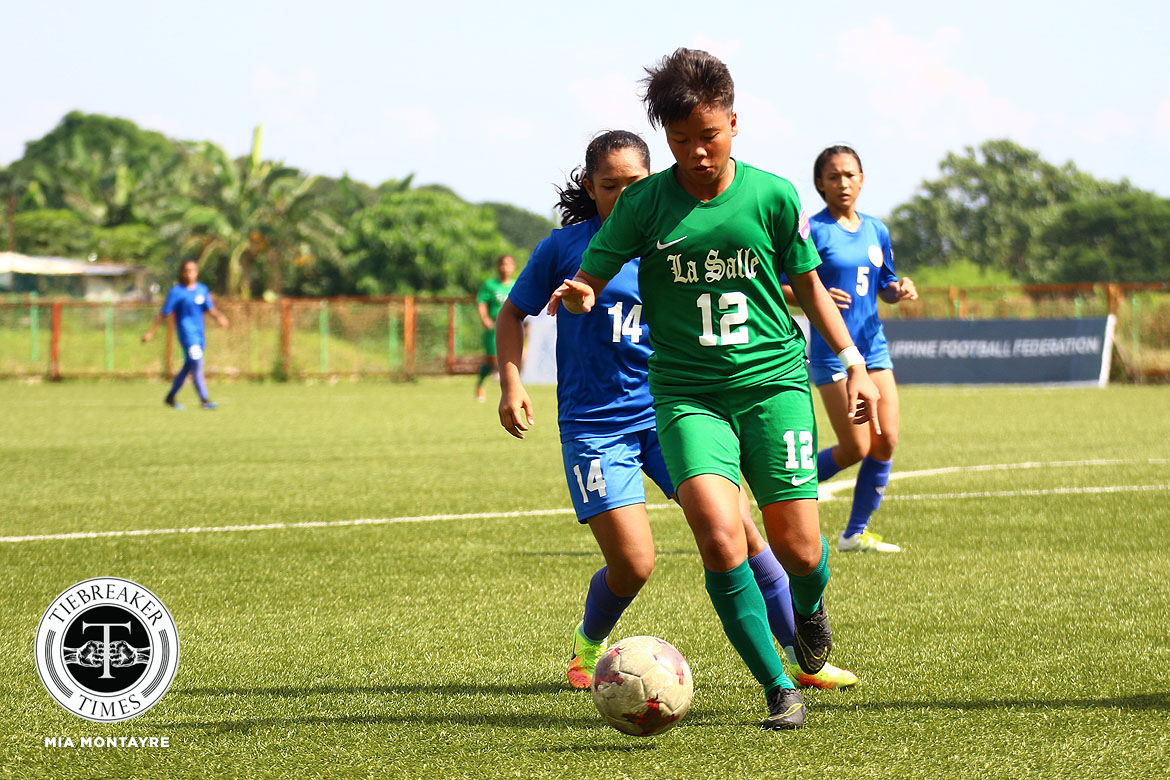 Eager to shake off the bitter taste of their previous match, De La Salle University sought for a win against Tuloy FC but faced a stiff challenge after prevailing only by 4-3.

Angelica Teves kicked things off with a 7th minute goal only to be answered two minutes later by Isabella Bandoja. Jonalyn Lucban put Tuloy ahead in the 26th minute until Anicka Castañeda leveled things up before half time. Teves and Castañeda gave advantage back to DLSU with goals in the 53rd and 73rd minutes, a hill that was too much to climb for Bandoja who managed only to pull a goal back in the 77th minute.

“I’d rather have these challenges here in the pre-season so we can address and prepare for the upcoming UAAP season,” said coach Alvin Ocampo. “I’m neither happy nor sad with the result but it will be a learning process for them. They are learning game by game.”

Bacatan lifts UP past Nomads test 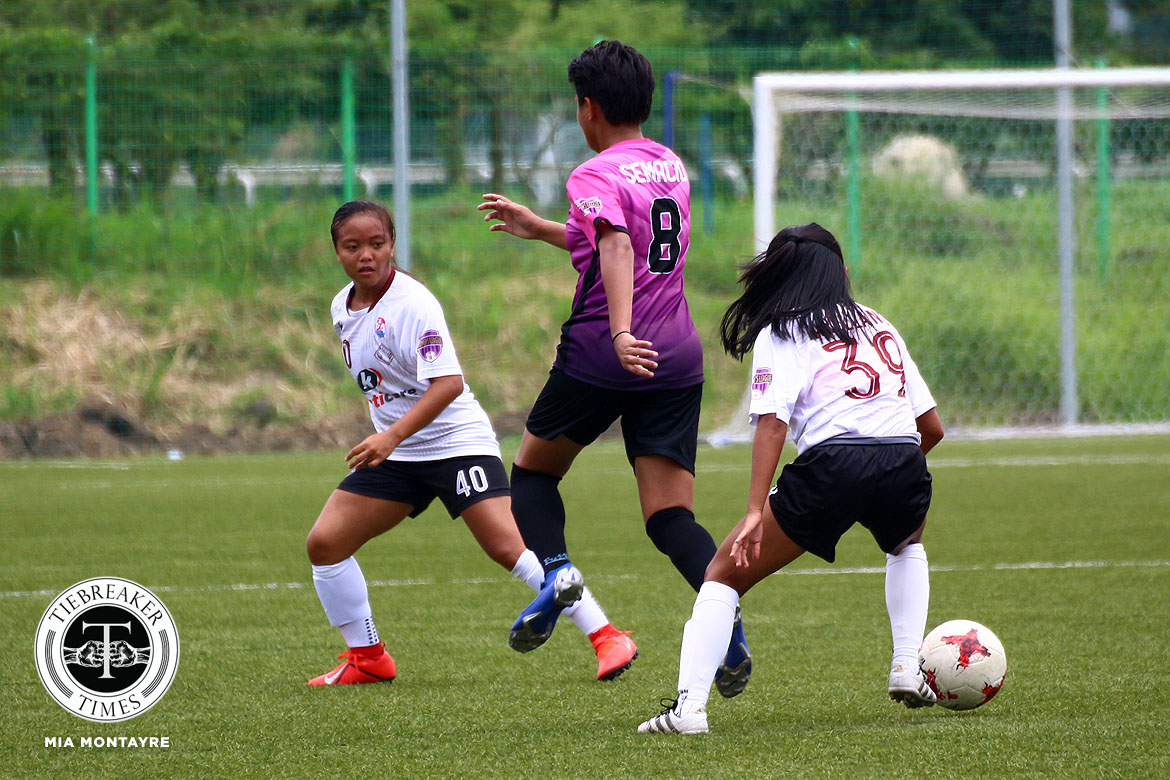 University of the Philippines needed to collect more points in order to stay in the top half and struggled to get their offense going against Nomads FC. Fortunately for them, Itsuko Bacatan’s breakthrough in first half added time was enough for the 1-0 win.

Coach Franco Bambico recognized their effort but was still left a little disappointed.

“The team played a rusty one compared to their previous matches. I wanted them to level up their game but I guess we have to go back again to the basics,” he said. 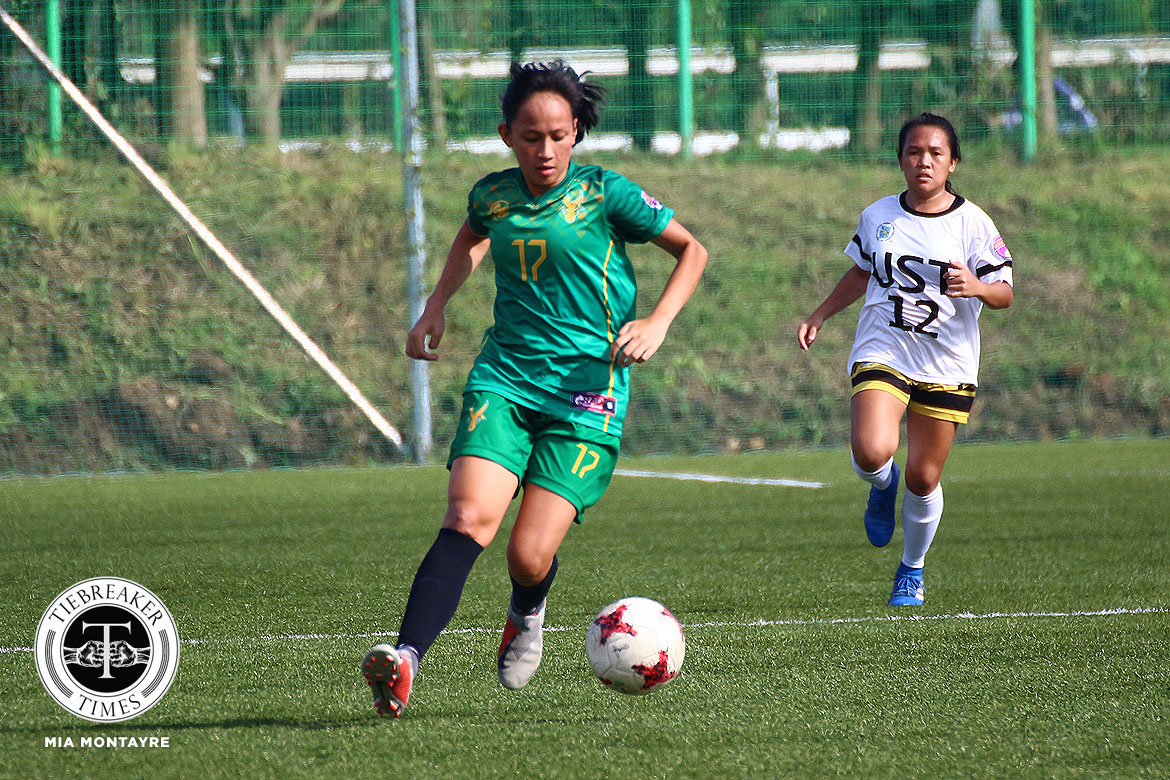 With De La Salle University far out of reach at the top, the second spot was being hotly contested by Far Eastern University and University of Santo Tomas, and it was the Lady Tamaraws who emerged with a 2-1 victory.

It was actually the Lady Booters of España who found the back of the net first after Kristine Joy Abo-abo’s opener in the 36th minute. Joyce Onrubia’s equalizer in the 58th minute stole the momentum for the Diliman-based squad well until Katherine Dacanay’s winning goal in the 67th minute.

“A win is a win but for me the most important is the discipline of the players on and off the field. Na adopt na nila yung system but playing the system will be easier if they follow with focus and concentration,” remarked coach Let Dimzon.

Rookies and senior players alike stepped up for De La Salle University in dealing a 6-1 beatdown of Maroons FC.

DLSU was in the process of reintegrating their national team players who were absent for a lengthy period due to commitment to the SEA Games, but the team’s stars took a step back to let others run the show.

“We don’t care if you’re a senior or rookie or a sophomore, whoever plays better gets the playing time. It’s as simple as that. Competition in team sports is not just when you compete against another team. It starts here with your own team, it starts at home,” acknowledged mentor Hans-Peter Smit. 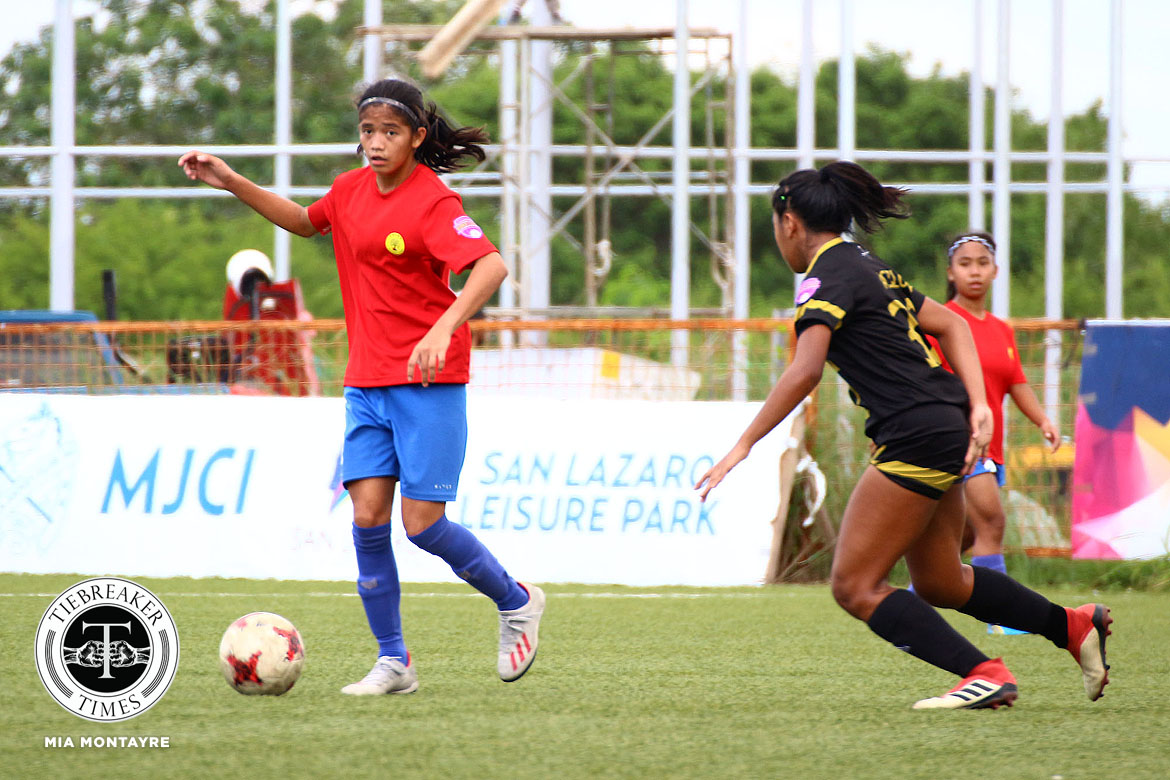 Winless for six straight matches, there was no doubt that Tuloy FC were hungry for a victory against Tigers FC, the last team they registered a victory against, before eventually winning 4-1.

Demelyn Rollon opened her season account with a 16th minute goal before Isabella Bandoja took over with goals in the 28th, 31st, 79th and 87th minutes. Diana Castro and Jenny Perez added goals for Tuloy in the 29th and 47th minutes. The Tigers did not just take it lying down however as Lovely Fernandez and Judy Mae Prado pitched in with a brace (32nd and 54th minutes) and a 44th minute strike, respectively.

“It’s important to improve game by game and the performance is more important than the results. After our last game against La Salle, we lost but we played very well. We wanted to continue the good work, show a good performance especially because this is the last game of the year so I told them to finish [2019] strong,” said coach Taketomo Suzuki. 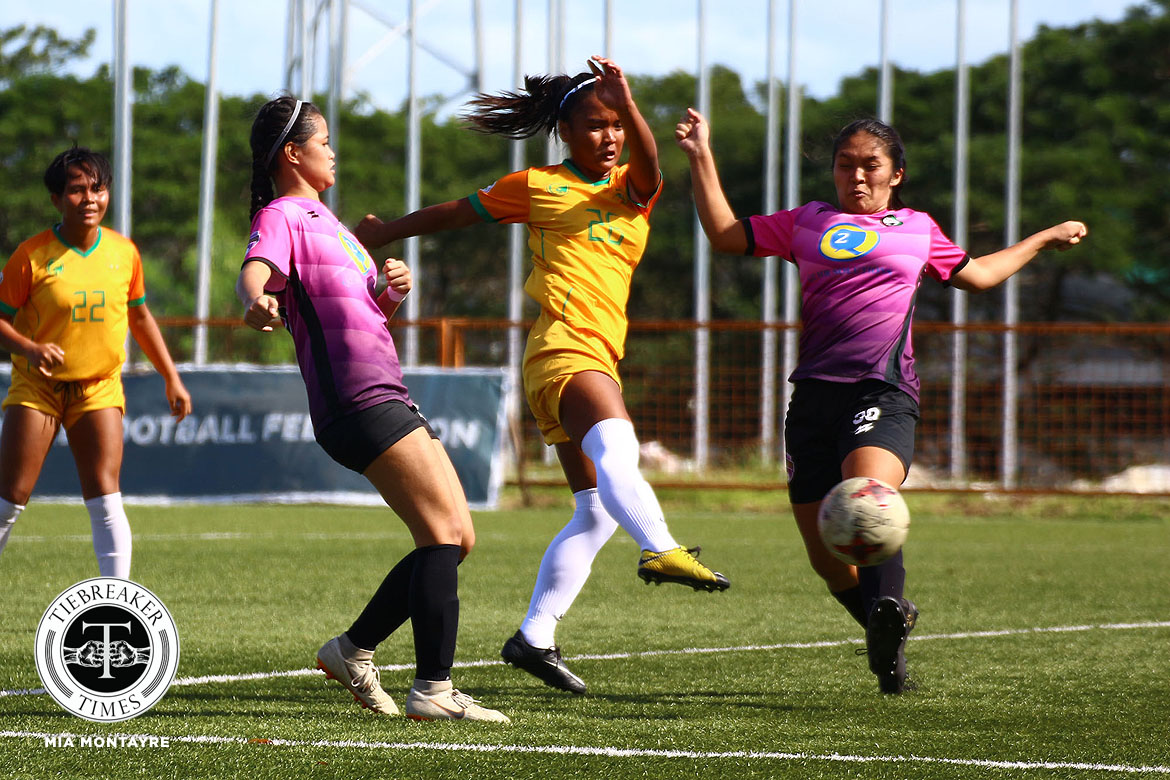 Far Eastern University was keen on distancing themselves from University of Santo Tomas and thus had no qualms mowing down Nomads FC 11-0.

Joyce Onrubia was putting on a show after completing a first- half hat-trick (12th, 35th and 42nd minutes) but it was substitute Rhea Bulauan who stole the limelight after scoring one better with goals in the 64th, 66th, 85th and 91st minutes. Jonela Albiño contributed two (44th and 54th minutes) while Lylhanie Cayabyab and Carmela Altiche produced two more for FEU in the 56th and 78th minutes.

“Good show up from the team. I think [there’s good] chemistry since we’ve been together for morning and afternoon training, it helps a lot. Napo-polish na nila yung attacking and nagiging plus factor din na we can hold the defenders’ area,” a pleased Let Dimzon shared. 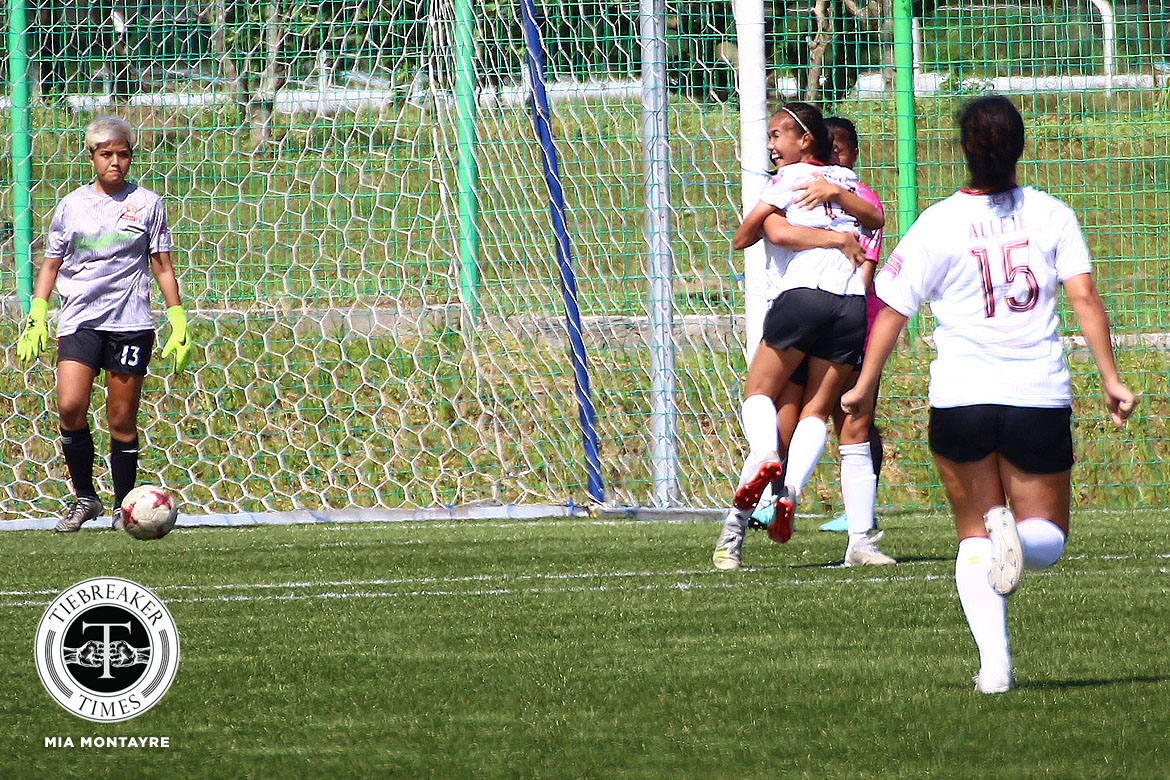 Stallion-Hiraya FC was enjoying an astonishing undefeated run but lacking substitutes and fresh legs in their latest meeting against collegiate opponents caused them to yield 1-0 to the University of the Philippines.

With defense and the goalkeeping prowess of Haya Ibarra being their strongest point this season, the Makati-based club nearly managed to keep a strong and complete UP side scoreless and eke out a draw. But Sofia Dungca came on for UP as a substitute in the last five minutes just as her team was about to execute a setpiece. Dungca went straight for the corner delivery and headed in the game’s only goal.

“It’s not a convincing win for me. We could have scored more, credit not just to [Stallion-Hiraya’s] goalkeeper but to the others for managing to hold their defensive line. On our part, there were a lot of balls wasted, passes not connected. We have to get back to those things again to improve on,” admitted Franco Bambico.

The PFF Women’s League will return next year on Saturday, January 11, at the PFF National Football Center with Tigers FC taking on Maroons FC at 8:00 A.M. followed by an all-UAAP clash between the University of the Philippines and University of Santo Tomas at 10:30 A.M.

On Sunday, January 12, Green Archers United FC will meet Far Eastern University at 8:00 A.M., then Stallion-Hiraya FC will look to bounce back against Tuloy FC at 10:30 A.M. before De La Salle University and Nomads FC end the weekend action at 2:30 P.M.