Another successful title defense looked very likely for the reigning PFF Women’s League champion De La Salle University. However, a draw with University of the Philippines has temporarily set it back.

Capitalizing on the situation is University of Santo Tomas who is now within touching distance of the league leaders after securing three more points last week at Moro Field, Quezon City. 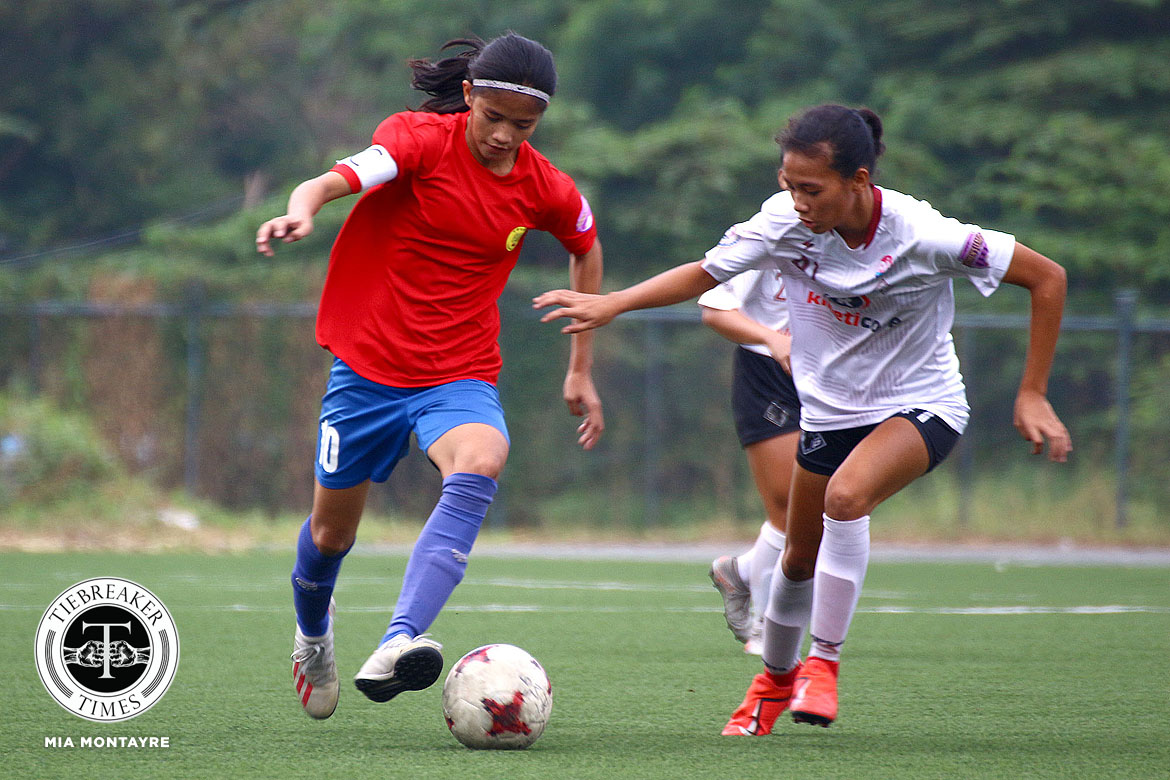 Eager to banish the bitter taste that their previous defaulted match left, Tuloy FC led by team captain Isabella Bandoja went on a 7-2 romp at the expense of Maroons FC 7-2 at UP Diliman Field.

Bandoja wasted little time getting to the scoreboard with a goal in the opening minute. She would go on to add four more in the 37th, 56th, 63rd and 67th minutes for a season-high of 27 goals, effectively breaking the league record for most goals scored in a single season, a feat she already owned from last season.

Coach Jayson Turco still lamented the points lost from their previous match before deciding to concentrate on their season-ender.

Truce with UP a wake-up call for DLSU 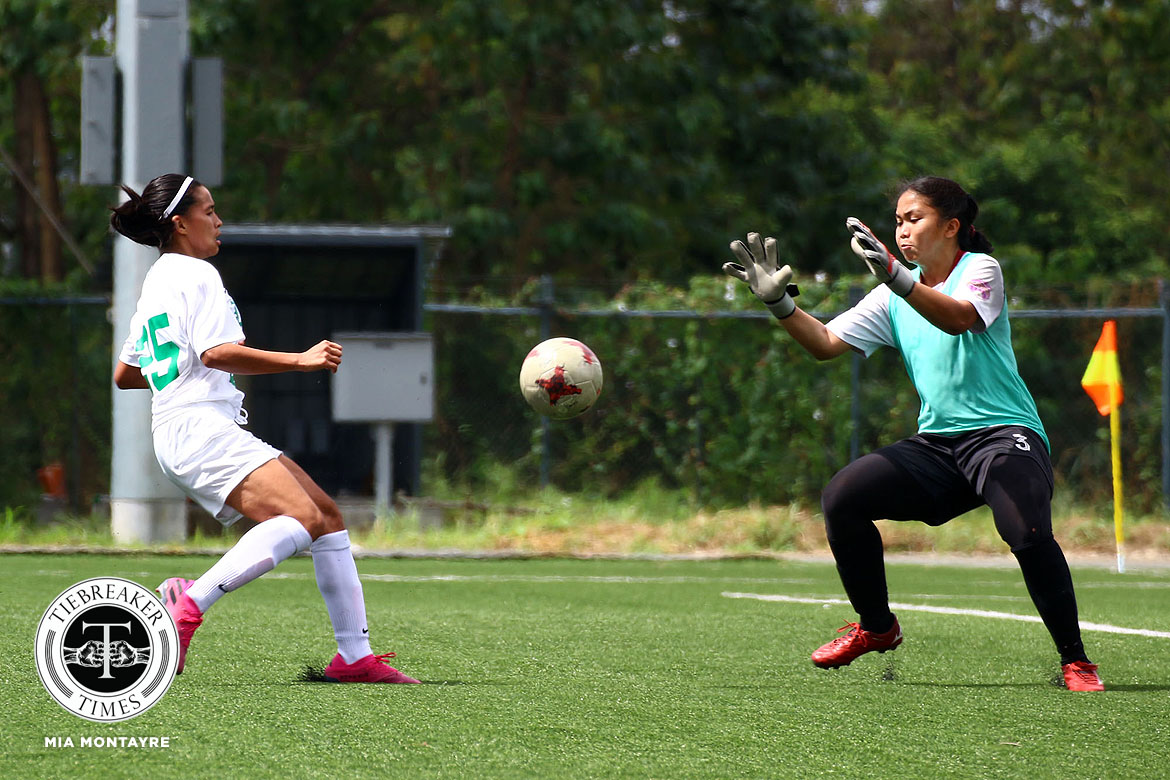 De La Salle University was just a win away from securing the championship but a 0-0 encounter with University of the Philippines waylaid those plans, still at UP Diliman Field.

Comfortable at playing at home, it was UP that jumped the gun on La Salle and dominated possession in the early going. Caught off balance by the host’s aggressiveness, the defending champions struggled to create their own momentum and had to resort to counterattacks.

However, a very alert Roxanne Eduave stood her ground in goal as did the Lady Maroons’ backline and while the transition to attack was swift it was also neutralized by the Lady Booters’ defensive half. In the end, both teams canceled each other out and settled for a draw.

“They were lackluster, there was no killing instinct. The energy level was way low,” bemoaned La Salle mentor Hans-Peter Smit who pinned the blame on having no field for training and conditioning due to the recent Taal unrest for his side’s troubles.

Meanwhile, his counterpart Anto Gonzales was happy with his squad’s much-improved performance tested against the might of the league leaders.

“I think we’re progressing. They are understanding their roles much better. The cohesiveness has tremendously improved. [La Salle] have good quality players with experience. So they’re always going to be dangerous. We really needed to outwork and outwit them to make the game competitive,” the UP tactician said. 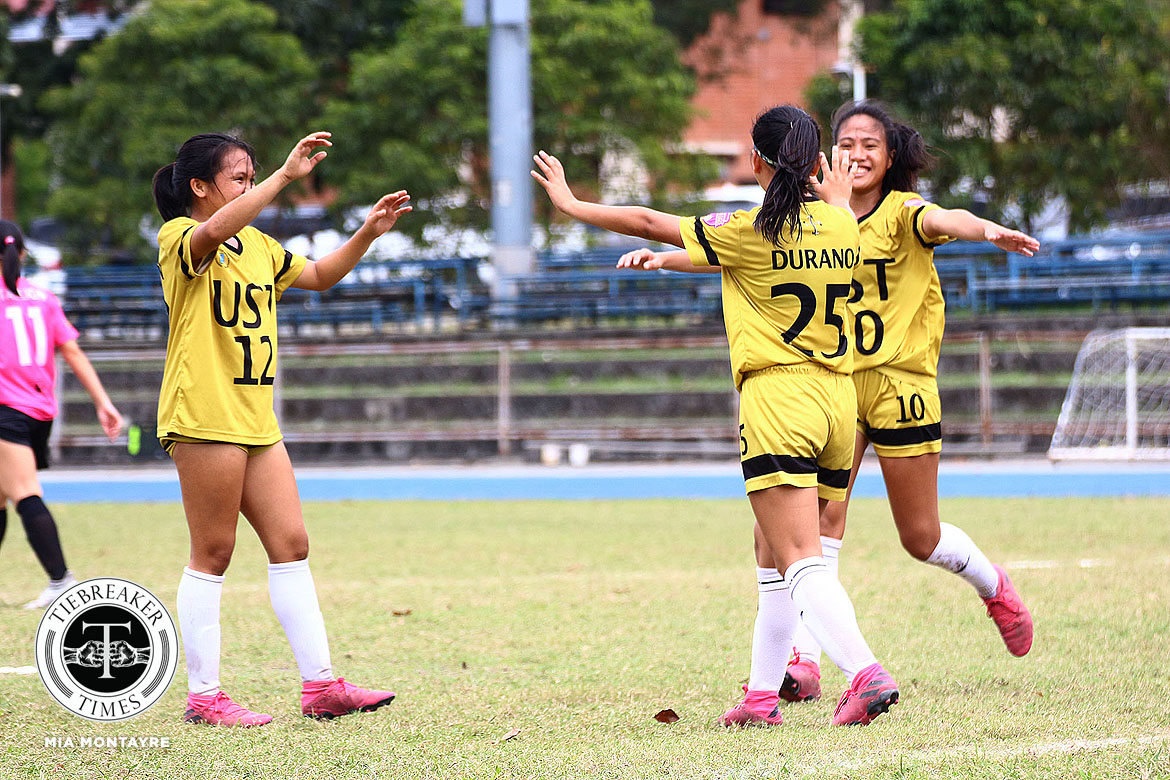 University of Santo Tomas avenged its shocking first round loss to Stallion-Hiraya FC with a 5-1 rout at Moro Field.

It seemed like a repeat of the upset was in the works when Cecille Dayrit stole an opening goal for Stallion-Hiraya, the former Atenean feeling at home. This time however, UST responded and made sure the score was level at the half thanks to Kristine Joy Abo-abo’s efforts moments before the break.

Together with inserting key players and veterans the likes of Lalaine Durano and Shelah Mae Cadag to boost the team’s confidence further, UST took charge resulting in Abo-abo netting a brace seven minutes after the restart before completing a hat-trick in the 80th minute.

Durano herself got on the scoresheet with a brace of goals in the 64th and 70th minutes as Stallion-Hiraya found themselves unable to answer.

The win puts UST squarely in second place as Stallion-Hiraya continues to be rooted in fourth after suffering their third straight loss, and with the draw between La Salle and UP, the chance of catching up to the league leaders opened up for the Lady Booters of Espanya. 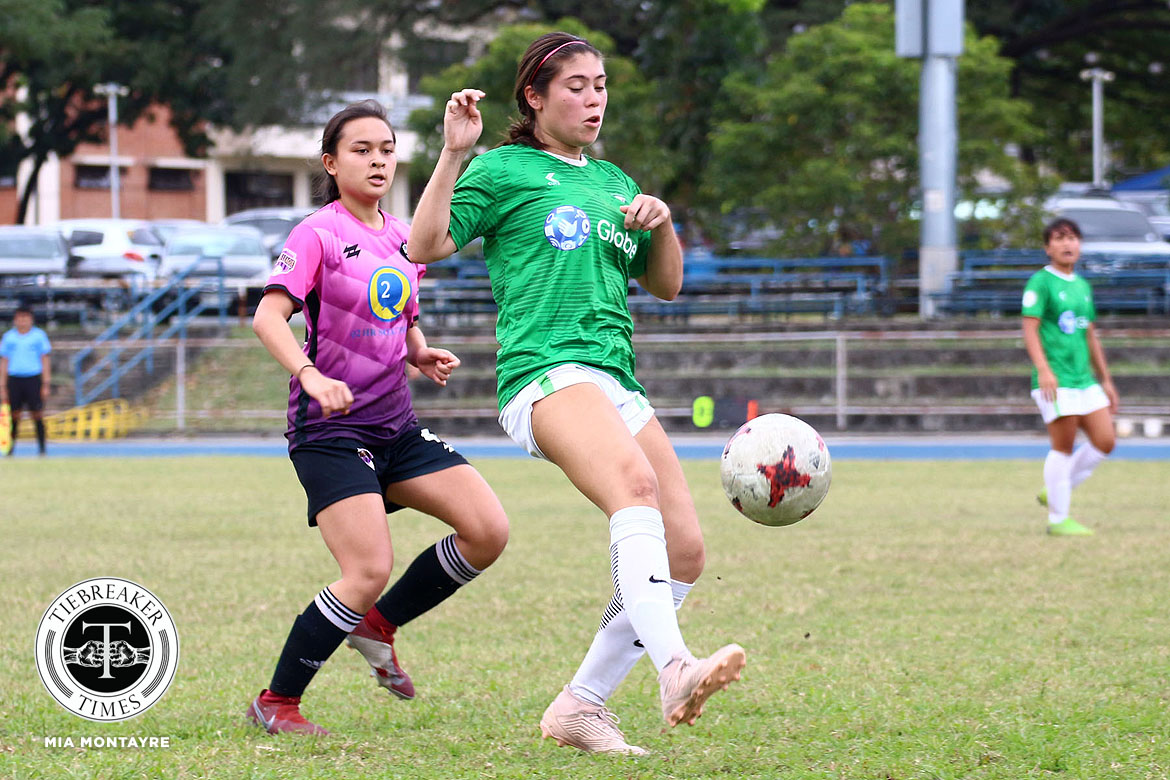 After enduring a string of disappointing defaults, Green Archers United FC not only turned up for a match but won it too 1-0 against Nomads FC.

Both teams struggled to settle down, cautious and wary of challenges having taken into consideration the poor numbers in their ranks. Nomads, however, shorthanded as they already were had to play with a man down with Chloe Hails suffering an injury.

It was a battle of youth versus experience with the veterans of GAU gaining the advantage after Nicole Andaya smashed a 22nd minute strike. The same veterans were slowly succumbing to tired legs as they struggled to cope with Joyce Semacio’s threatening runs into their half, but Andaya’s lone goal held up. 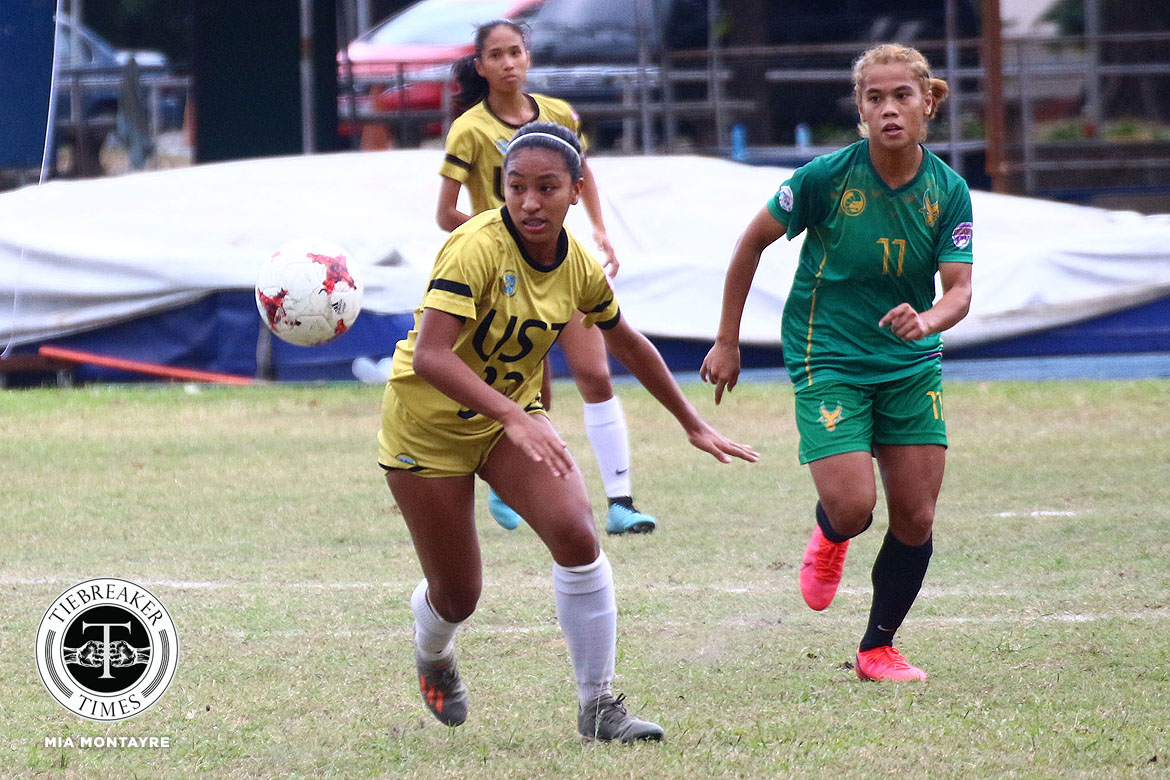 Looking to finish their pre-UAAP tournament strong with the top out of reach, Far Eastern University bested Tigers FC 3-1.

An early distraction in the form of Vanessa Velasco getting sent off for an infraction did not deter Joyce Onrubia from getting FEU on the scoreboard first when she netted the opening goal in the 19th minute.

When Samantha Asilo pulled the lead back in the 34th minute, a comeback seemed to be in the works perhaps taking inspiration from the senior UST team earlier in the day.

But all thoughts of a turnaround were dashed as Onrubia put the team on her back as she produced her fourth hat-trick of the season with two more goals in the 51st and 56th minutes.

The PFF Women’s League continues on Wednesday, February 5, at the UP Field with the Maroons FC and the University of Santo Tomas clashing at 7:00 A.M. before Tigers FC face the University of the Philippines at 9:10 A.M.

On Sunday, February 9, back at the PFF National Football Center in Carmona, the Maroons FC will kick off against Stallion-Hiraya FC at 8:00 A.M. followed by the Green Archers United FC and Tuloy FC at 10:30 A.M before Far Eastern University and De La Salle University close it out at 2:30 P.M.