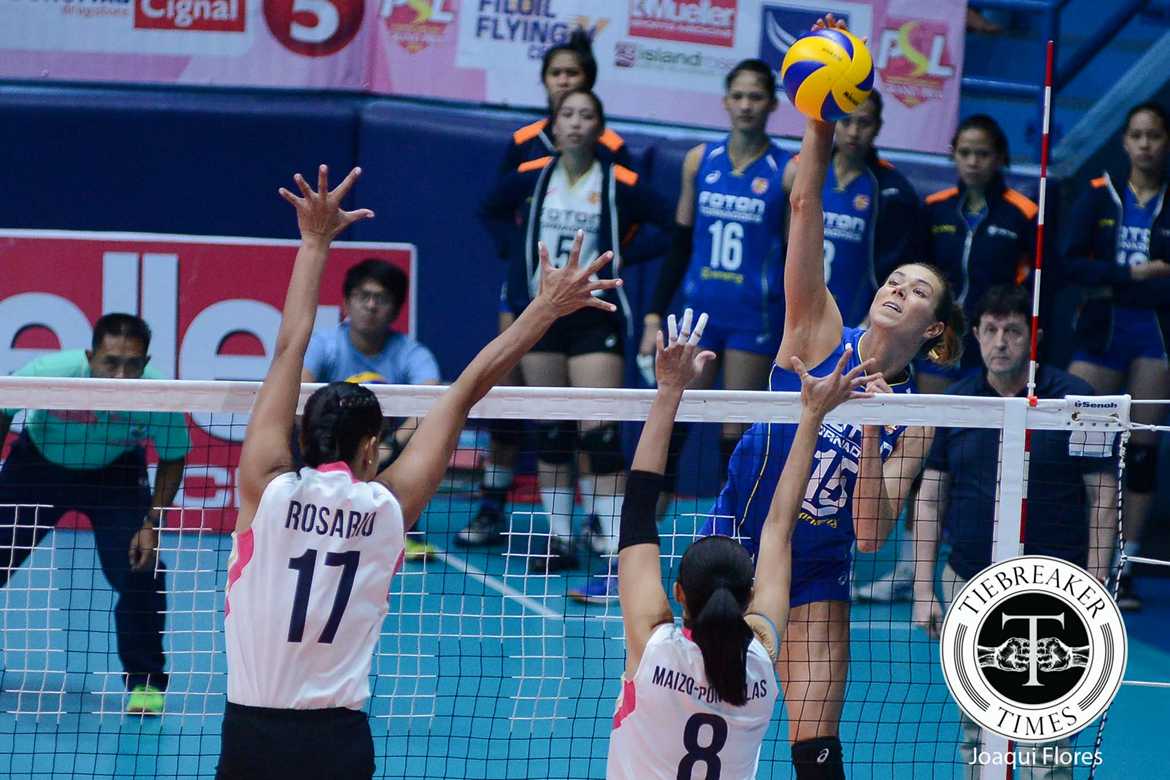 For a match that both teams hailed as a no-bearing prelude to the semifinals, Petron and Foton’s second round clash in the 2016 Philippine Superliga Grand Prix did not lack in intensity.

In the end, the Tornadoes continued their mastery over Petron dating back to the last Grand Prix Conference, pulling away late in the four-setter 22-25, 25-18, 25-22, 25-14 and taking the top seed in the playoffs at the FilOil Flying V Centre.

The two-time PSL champs Petron opened with a flurry of solid serves that kept pFoton’s vaunted offense momentarily at bay. After building an 11-6 lead, Petron slumped and gave the Tornadoes an opening to trim the lead. Foton fed off Petron errors that brought to within one, 12-13. Both squads then traded sideouts until Tri-Activ Spikers import Stephanie Niemer got a smash, a block, and an ace in a near consecutive sequence that gave Petron a 22-19 cushion. It was Niemer who again capped the first set, skying over two blockers to halt a late Foton rally.

The defending Grand Prix champs fought back in the second set. Led by reigning MVP Lindsay Stalzer, Foton broke a 9-all deadlock and rushed to a 16-11 advantage. Petron’s attempts at a comeback only led to errors, setting up Foton to take the set via service aces.

Foton seemed to have the third set in the bag after Stalzer outdueled Niemer late and brought them a 20-17 lead. Following a timeout, Niemer came alive anew, making up the three-point deficit through consecutive attacks. But the Tornadoes had the finals say in the set, rattling off a 3-0 run or a 23-20 advantage. Stalzer then converted on an open hit, setting up Jaja Santiago’s set-winning soft hit.

Petron ran out of gas in the third set. The Tornadoes continually foiled Niemer’s attacks at the net, forcing Petron into errors and multiple miscues. The Tornadoes had the match midway through the fourth set with a 19-9 lead.

After the match, Foton head coach Moro Branislav laid out the winning against Petron was not on his mind.

“My team is number one in the league now, but the goal is to be number one after the season. My team, for my opinion, is not ready yet. Now we have a 10-day break we’ll use this time prepare for the semifinals,” said the Serbian mentor.

Both squads had clinched outright berths to the semis days before the match. They both await the winner of the do-or-die matches on Sunday to see who’ll they face in the semis at Legazpi City.

Stalzer paced the Foton offense with 25 points while Santiago added 21. The Tornadoes finished with a 56-39 advantage in attacks.

Foton finished the elimination round with a solitary loss, an out-of-town tiff against F2 Logistics in which several key players were out due to other commitments.

Stephanie Niemer sizzled for 27 points but only had significant offensive help from fellow import Serena Warner who amassed 11 markers. Ariel Usher, who had a hamstring injury added 14 points. Foton was without Cherry Rondina and Ej Laure.

Petron earned an 8-2 card, owing both their losses to Foton.