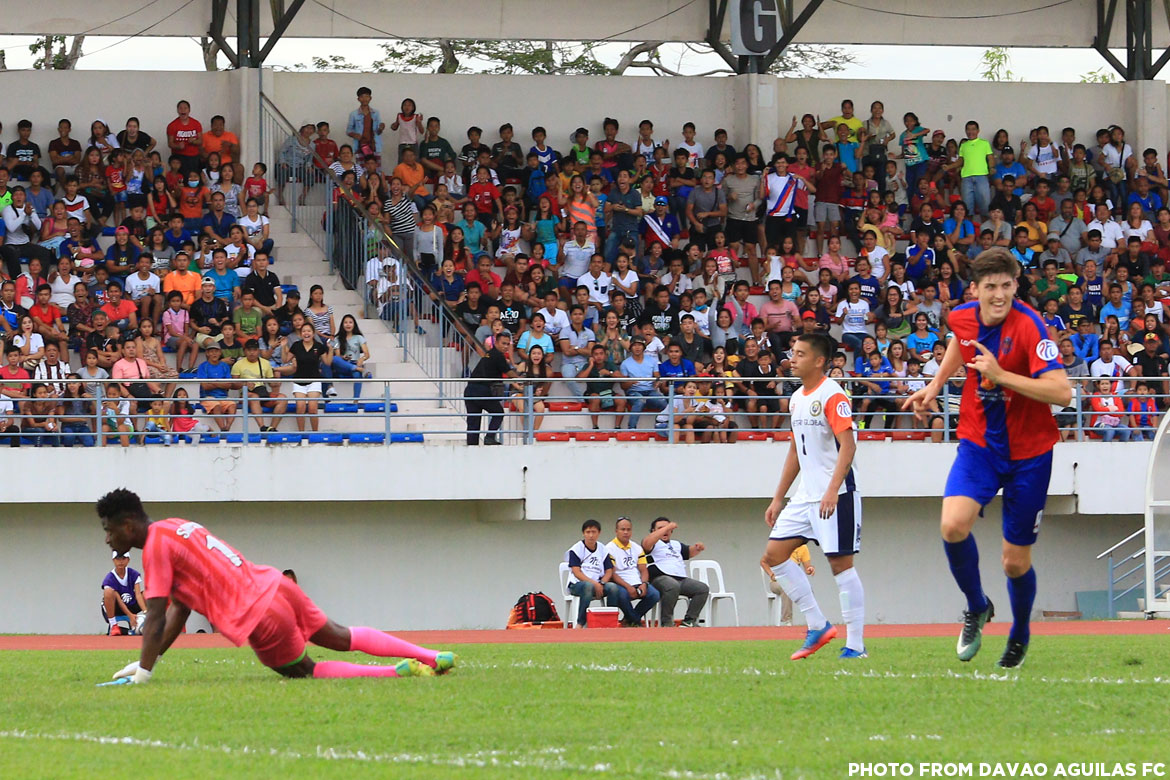 However, none of those happened.

Davao had Australian striker Harry Sawyer to thank for their second victory in a span of four days as they seized a 2-4 away win against Ilocos in the latter’s home ground of Quirino Stadium during the 4:00 PM kickoff.

Sawyer capitalized on Ilocos’ poor defending to draw first blood after just eight minutes of action, and proceeded to give the Marlon Maro-coached squad a two-goal lead just before halftime.

But the home side responded when Kennedy Uzoka scored as soon as the game restarted, only for Sawyer to score his third goal of the contest at the 57th minute.

Not even another Ilocos goal — this time by Charlie Beaton, four minutes later — could swing the momentum towards the Ian Gillian’s wards, as Phil Younghusband’s 90th minute penalty secured the three points for Jefferson Cheng’s club.

The win increased Davao’s (7th place) separation from Ilocos (8th place) to seven points, as the former have 14 compared to the latter’s seven.

After a promising start to the 2017 PFL season, JPV have left themselves with much ground to make up if they want to book a ticket to the post-season dance.

Marikina were 10 points behind current fourth-placers Global Cebu, and anything but a loss against 2017 AFC Cup ASEAN champions Ceres Negros FC would be a credible result to bring home.

But things went awfully wrong for JPV at the Panaad Stadium in Bacolod, as Ceres were awarded a penalty in the 22nd minute, and the situation escalated when defender Peter Fadrigalan was ejected for pushing the referee.

Ceres forward Fernando Rodriguez coolly converted the spot-kick in the 23rd minute and eluded his marker to double the home side’s cushion three minutes before the break.

It was in the final 20 minutes of the match that the contest was well and truly alive. Takumi Uesato escaped his defenders to pull a goal back for the visitors after 71 minutes, to trim the deficit to just one goal.

JPV were then presented a golden chance to level the proceedings when Ceres defender Junior Munoz was adjudged to have brought down midfielder Atsushi Shimono at the home side’s penalty box. Skipper Takashi Odawara directed the ball home soon afterwards to make it 2-2 with seven minutes left in the game.

Ceres had a chance to snatch all three points in stoppage time when the referee granted them another penalty, only for Rodriguez to be denied the game-winner and hattrick by a determined Felipe Tripulca, Jr.

Marikina ultimately escaped with a 2-2 draw at the expense of a frustrated Ceres, who missed the chance to go solo second in the standings.

Due to the draw, Ceres are still in 3rd place with 39 points, while JPV were stuck in 5th place with 28 points.

Ilocos shall look to bounce back when they host league leaders FC Meralco Manila this October 20, 7:00 PM at the Quirino Stadium.

There will then be two games that simultaneously kickoff at 4:00 PM on October 21. Stallion Laguna entertain Ceres at the Binan Football Stadium, while Kaya-Makati shall do the same against versus Global at the University of Makati Stadium

The weekend fixtures will be capped off by Marikina’’s clash with Davao on October 22, 4:00 PM with the venue still to be confirmed.