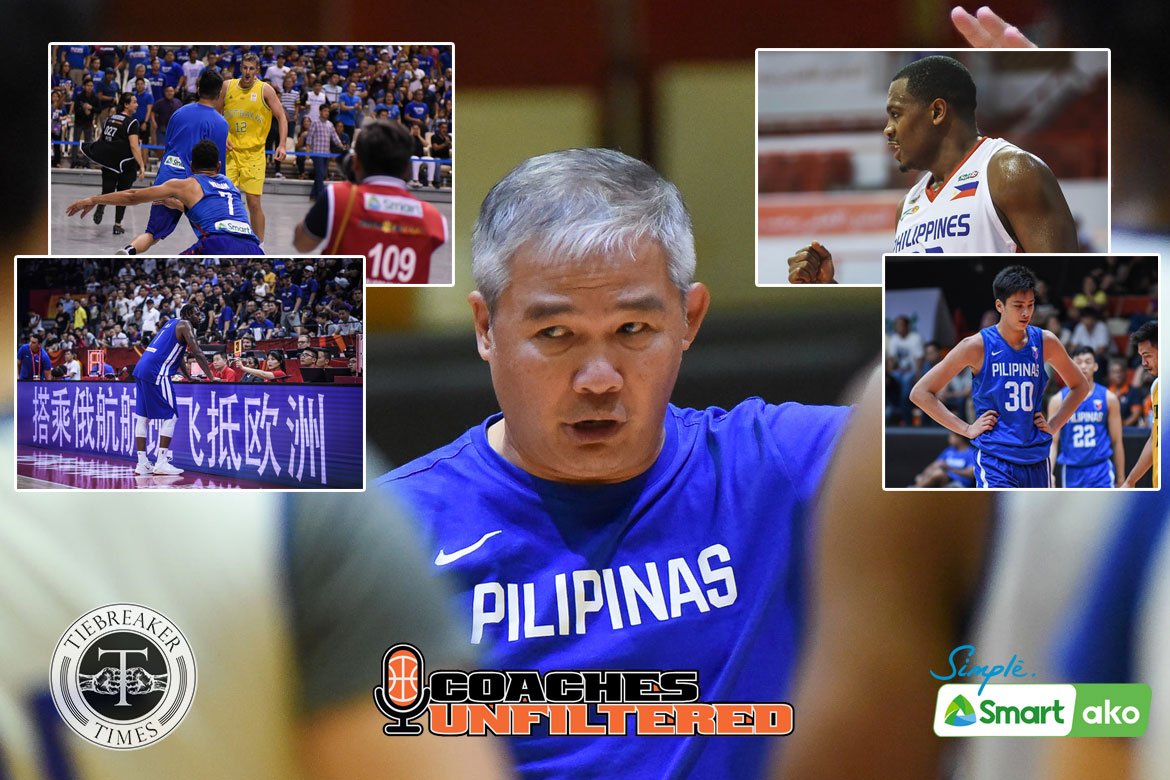 Chot Reyes and Gilas Pilipinas were on the verge of ending its first round campaign in the 2019 FIBA World Cup Asian Qualifiers last July 2, 2018.

Their final outing was already a lost cause, with Australia holding a 31-point lead, 79-48, with 4:01 left in the third canto.

Then all hell literally broke loose.

The infamous brawl resulted in 10 Gilas players suspended and a fine of CHF 250,000 for the Samahang Basketbol ng Pilipinas, plus an additional 10,000 for Reyes.

Ultimately, it resulted in Reyes’ dismissal from national team duties.

But what if Reyes was not relieved of his duty? What were his plans for the program heading into the 2019 FIBA World Cup and beyond?

Thursday evening, he revealed what should have been in the pipeline for Gilas during an episode of Coaches Unfiltered, presented by SMART Sports and supported by Mighty Sports and Choi Garden.

“Yeah, we had the whole plan drawn up up to China but obviously, the Australia brawl happened.”

Entering the second round with a 4-2 record, and facing a battered Iran team and Qatar to start, Reyes was supposed to plug young cadets into the team — including Thirdy Ravena.

Yeng Guiao came through, adding Kai Sotto and Ricci Rivero to the pool of the fifth window before plugging in the three-time UAAP Finals MVP for the final one.

“We wanted to get younger players in. We even have the plan of if we had already qualified and we are till playing, maybe we put Kai Sotto in and Thirdy in the young guys, sabak na natin,” shared Reyes.

Besides entering the World Cup proper, Reyes already had the grand plan of making it to the 2020 Tokyo Olympics in place.

The best-placed Asian team in the 32-team meet in China would have received an outright ticket to the Games. Besides this, 16 tickets to the OQT were at stake.

“We had the 2020 Olympics plan to how to qualify because in the World Cup. Before nag-iba na naman ‘yung format, there was going to be teams that will qualify to the Olympics. That’s what we were planning for.”

Guiao’s team ended up dead last, winning none of its five games with a total point differential of 147 points.

Iran ended up qualifying to the Olympics with a 2-3 slate.

Finally, Reyes wanted to add more players to the naturalized players pool that only had Andray Blatche in it.

As early as the second round, Reyes wanted to kickstart the naturalization process for one Justin Brownlee.

“We were also thinking of player mo Charles, si Ginebra import, si JB. I talked to Tim [Cone] about him, we already had those plans coming in,” he said.

“We were already tinkering with different combinations and different lineup.”

Up to this day, Reyes cannot help but look back and wonder — what if the Gilas-Boomers brawl did not happen.

One thing is for sure — things would have gone better.

“Unfortunately, it remains plans up to now.”