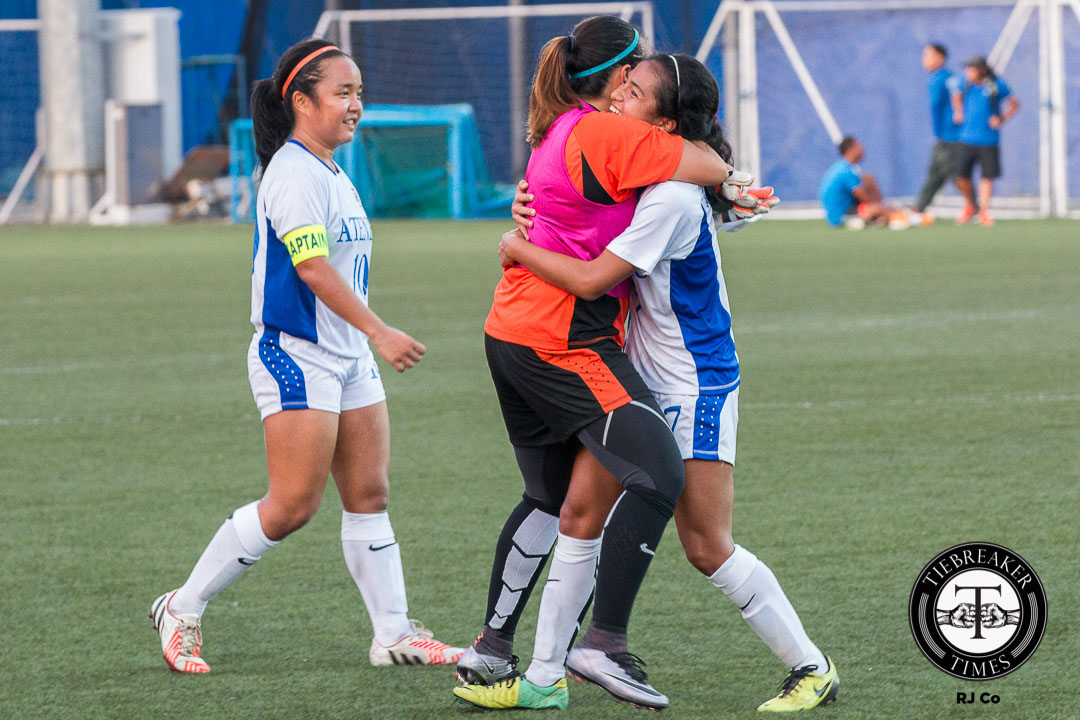 The Ateneo Lady Eagles chose to approach this season with that mantra in mind, which may come very handy if it means they find themselves lifting the much-coveted UAAP trophy at the end of the season.

With only five minutes left in their most recent game, the Ateneans were on the brink of what could have been another dampening defeat. It would have been a huge blow to their title aspirations early in the season. Against all odds, they successfully turned the game around in that brief period, grabbing a vital win in the process. The win puts them joint second on the table, level on points with UP, albeit having played a game more than them.

After the match, experienced campaigners Nona Amoncio and Camille Rodriguez were evidently pleased with how things turned out. Relieved, they are well aware of the few questions the team need to answer if they are to compete for the title this season.

Upon collecting their thoughts, the duo believe the team has learned a lot more about themselves after two tightly contested affairs. They placed emphasis on solidifying the cohesion of the team, having identified a couple of issues that may set them back if left unresolved. Amoncio was not entirely happy with how the team lacked organization going forward.

“Our one-two passes really need to be precise. Our passing was kinda loose. We [often] ended up passing it to the UST defense,” the third year winger elaborated. In her opinion, it is a sign for the team to communicate more on the field. Staying composed from start to finish is also a concern, as Rodriguez stated that moments of collective indecisiveness may result in more avoidable calamities in the long run, such as Jennizel Cabalan’s goal against the run of play. Still early into the season, the main positive for Ateneo is that there’s still a lot of time to sort out any problems that may come their way.

Not only talking about the negatives, Amoncio also spoke proudly of her team’s latest achievement. In what was a nerve-racking moment, the substitute feared for the worst. Coming from a narrow loss to La Salle, Ateneo knew that losing to UST would only make their season more miserable. In the end, the Lady Eagles found ways to quickly and timely turn the game to its head. For Amoncio, it took an enormous display of character for Ateneo to grind out an important result. “We really pushed for it. We wanted to end the game strong even though we started out slow,” she elaborated. The Lady Eagles did just that by scoring twice in three late second half minutes.

Coming off the bench, Amoncio sparked the fight back by scoring the equalizer with four minutes left in the game. For her efforts, teammate and fourth year player Camille Rodriguez acknowledged everyone’s contributions, especially Amoncio, towards clinching the much-sought win. “It’s not about the playing time. It’s about the quality of the game that you bring and our super subs showed it. Like Nona, she came from the bench but she was able to score,” the Ateneo number seven cited.

Fortunate to have levelled before time expired, the Ateneans pushed their luck even further to get a better result. Their second goal was actually a result of an unfortunate last-minute error committed by UST goalkeeper Nicole Reyes. What looked like a routine play for her turned into a disaster, mainly because of Rodriguez’s success in pressuring the inexperienced custodian. While conceding that lady luck may have been on their side, Rodriguez feels that the breakthrough was also a product of her limitless desire to lift her team to victory. “I think it’s just a never-say-die attitude that I just keep to mind and keep to heart,” she expounded.

Now with three points to their tally, the Lady Eagles are hopeful of collecting more as they go along. With the season still far from over, both players agreed that the team should take it step by step by not putting a lot of thought into the distant future. Nevertheless, Rodriguez admitted that the team has indeed set its sights towards capturing an elusive spot in the final. For the past three years, Ateneo had been left to settle for third place. While bronze medals aren’t bad decorations at all, they simply think it’s about time to step it up a notch further this season. “The players who are left here are very much atat [anxious] for the championship. Our eyes, like the eagles we are, are really set on the championship. We won’t settle for anything less,” she vowed.

Now more knowledgeable of their capabilities and deficiencies, the Lady Eagles will hope to maximize their strengths and address their weaknesses when they square off with neighbors and last year’s finalists, the UP Fighting Maroons, tomorrow evening.