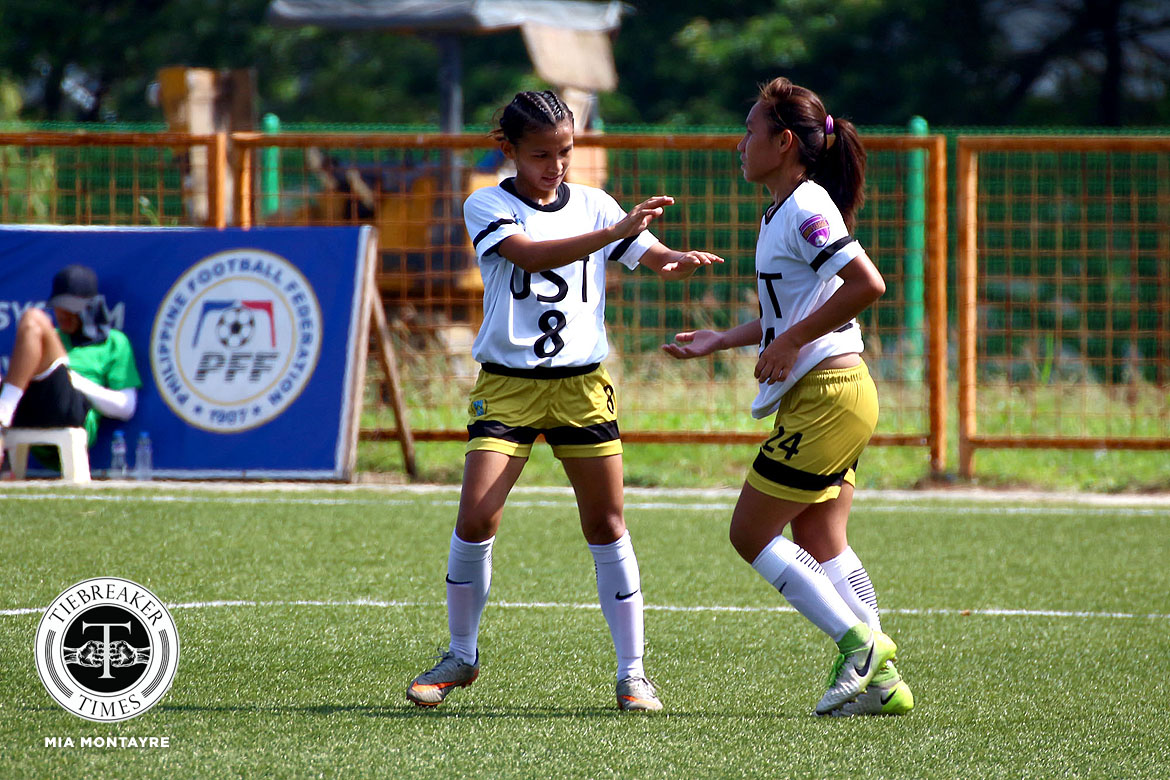 After 12 weeks of 45 matches, the first round concluded with University of Santo Tomas and Far Eastern University both walking away with three big points. 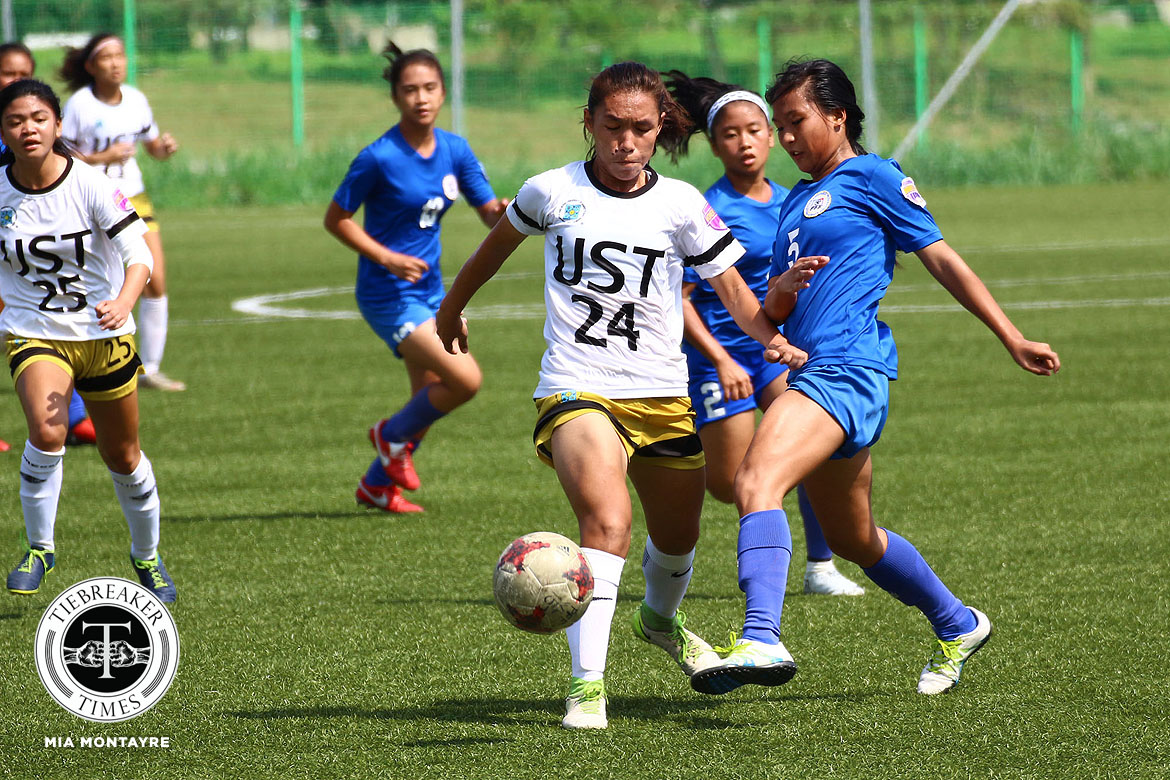 Coming off two deflating losses, University of Santo Tomas resolved to put an end to its losing streak with a 6-3 dismantling of Tuloy FC.

Kristine Joy Abo-abo raced to get UST on the board with a 13th-minute strike, which Shelah Mae Cadag then followed up in the 26th minute. Unfazed by the 0-2 hole, Tuloy struck back with Jamielyn Nañez’s free-kick wonder in first-half stoppage.

The Lady Booters of España responded with a flurry of goals in the 71st minute by Cecile Deita and a 74th-minute brace by Cadag. Isabella Bandoja then countered with Tuloy’s second goal three minutes later.

In the 88th minute, Toni Panes pocketed a long shot of her own. Jenny Perez answered with a 90th-minute strike, but Mary Joy Indac rendered it void with an injury-time goal.

The goals conceded did not sit well with Aging Rubio, who still had a critical assessment of her charges despite the win.

UST places itself in second with 19 points and a 6-1-2 record midway through the season. Meanwhile, Tuloy FC barely remain in the top half in fifth with 12 points and a 4-0-5 slate.

FEU pummel Tigers to climb back to third 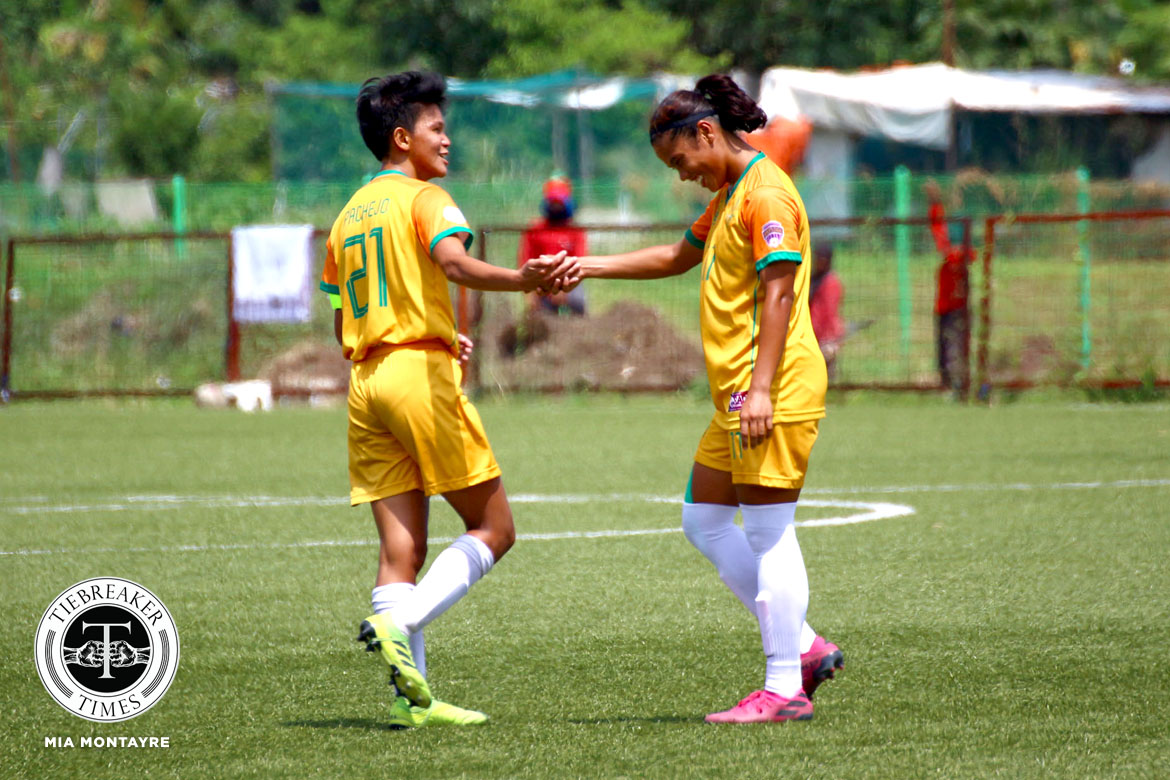 Instead of succumbing to rustiness, a refreshed Far Eastern University returned from a lengthy break with a 6-0 thrashing of Tigers FC.

Two players registered braces — namely Hannah Faith Pachejo in the 22nd and 51st minutes; and Joyce Onrubia in the 25th and 28th minutes.

Two other players chipped in single goals — Vanessa Velasco in the 24th minute, then Kyla Rivera in the 65th minute — to banish Tigers FC to its 7th loss of the season and keep them bottom of the table.

“Tina-target talaga namin is to gain points as much as possible every game, pero what’s better for me is nakuha ng team ma-perform ‘yung quality ng trainings na ginagawa namin for the past two weeks and it is very satisfying to me,” she said.

The FEU tactician also added that she hopes her squad can keep this kind of momentum going into the second half of the season.

FEU sits in third, taking the spot back from Stallion-Hiraya, on 16 points and a 4-4-1 record. Meanwhile, Tigers FC is in last place with 4 points and a 1-1-7 slate.

The PFF Women’s League is scheduled to begin the second round next weekend at the PFF National Football Center in Carmona, Cavite.

On Saturday, October 19, Tuloy FC are set to face the University of the Philippines at 8:00 A.M. and will be followed by De La Salle University taking on Tigers FC at 10:30 A.M.

On Sunday, October 20, there will be three fixtures beginning with Stallion-Hiraya FC and Green Archers United FC at 8:00 A.M., followed by Nomads FC and University of Santo Tomas at 10:30 A.M. and finally Maroons FC and Far Eastern University at 2:30 P.M.