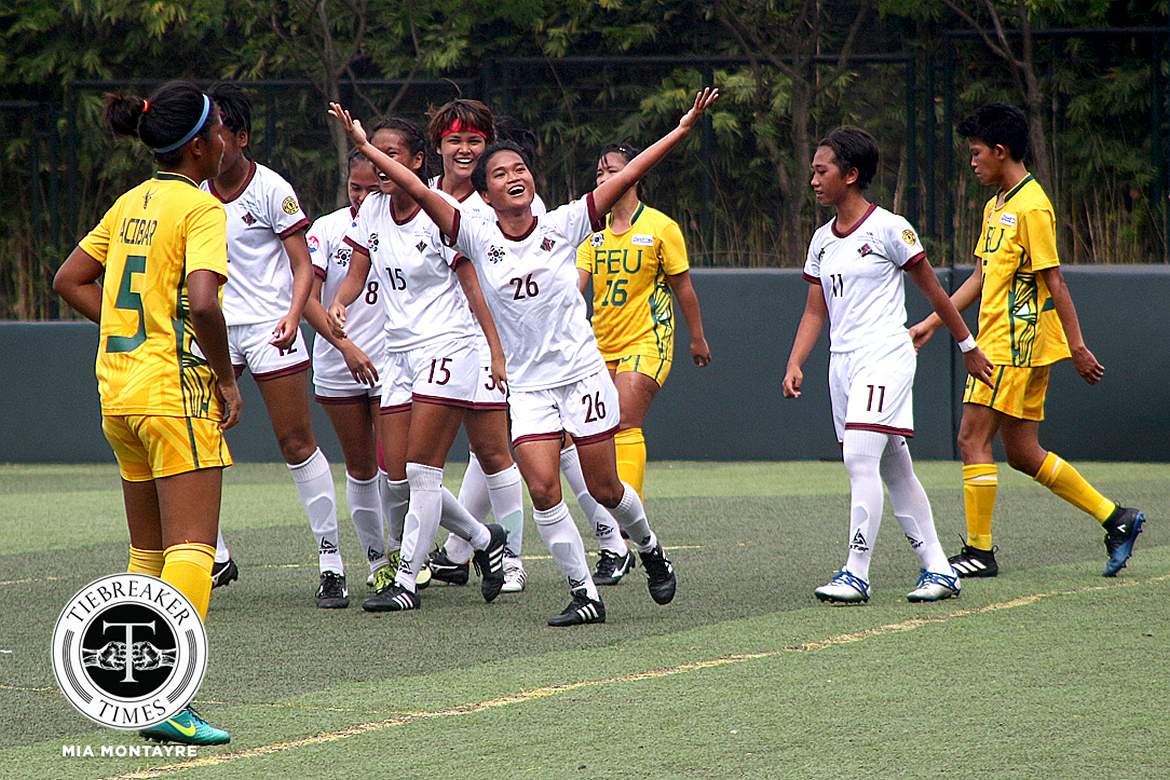 Defending UAAP Champions University of the Philippines Lady Maroons drew 1-1 against the Far Eastern University Lady Tamaraws on a hot Thursday afternoon at the FEU-Diliman field in Quezon City. However, the game’s main talking point wasn’t any great goal nor any refereeing error, but a terrible injury sustained by one of the players on the pitch.

After giving the Lady Maroons a precious 1-0 edge at the stroke of halftime, State U forward BG Sta. Clara was fouled in the FEU half, just minutes after the game restarted. Down on the ground, the Aroroy National High School alumna failed to recover quickly and medics rushed to the pitch to provide immediate aid as well as to rush her to a nearby hospital.

It was a horrifying scene to witness, and the accident raised questions about the timing and venue of the game. A kickoff time of 1:30 PM is difficult during this summer season, while the artificial turn does not add any favors.

“To be honest it’s not good for the players of course. Even a 3:00 PM game time at this time of the year isn’t beneficial to the players, but then again we try to make the most out of what we’re given and we’re glad we’re given this opportunity to play the sport that we love,” reflected State U mentor Anto Gonzales.

“It’s a head concussion that resulted [in] a minor clot sa brain pero it’s insignificant. She was discharged yesterday [March 29, 2017]. Wala naman daw hilo, but she will be observed for one week. Hopefully, she won’t show signs of further trauma,” explained the Claret School of Quezon City graduate.

Sta. Clara’s playing career will now have to take a step back to her health. The fourth-year Lady Maroon might have a long way to go if indeed she will continue playing the sport, although it won’t be the first time Gonzales will witness such a comeback.

The former Azkal narrated, “I’m not a medical expert so I cannot say anything about that but based from experience I had a player before who also suffered the same injury, even worse. He was in the hospital for two, three weeks, didn’t play for three months because of a blood clot sa brain.

“Buti hindi na-compress yung brain. Had it compressed his brain, then surgery definitely, then football won’t be an option. He got to play. He was able to come back, train for two months or a month and a half before UAAP. We won the championship and he became the MVP.”

At the end of the day, football is a rough sport – arguably the roughest team sport in the UAAP calendar. With that in mind, the four-time champion head coach had a suggestion in order to prevent similar injuries in the future.

“It’s an accident. Maybe the most we can do is to really choose playing surfaces that would minimize the gravity of such injuries (like) natural grass or Rizal Memorial. Had it been played on a softer surface, I don’t think that injury would be severe,” noted Gonzales.

Coincidentally, State U’s next game on April 19 against the De La Salle University Lady Archers shall be played on the exact same pitch at the same kickoff time, as per the latest edition of the schedule.

“Haven’t thought about it yet. We’ll see what we can do. We’ll try to maybe write a letter to request that the games be moved. We’ll see,” concluded Gonzales.