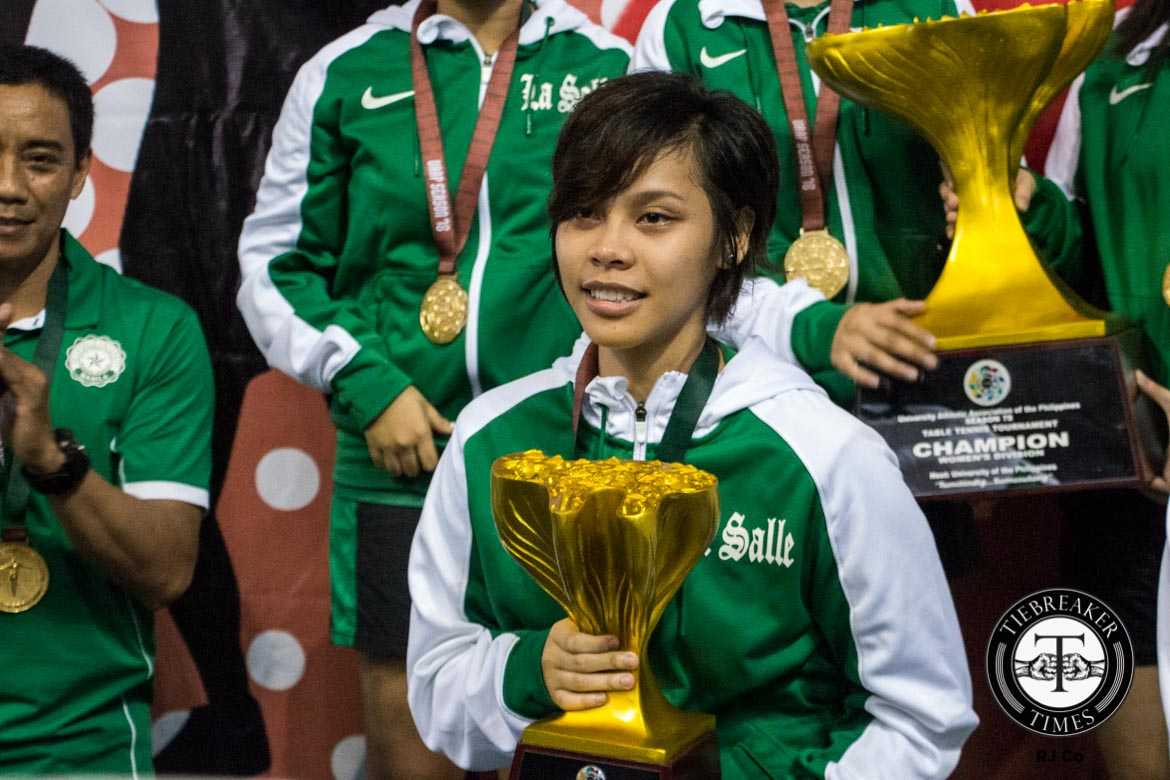 In the sporting world in general, there will be wins and there will be losses. For some events, there will be phenoms and high-caliber athletes, but it’s a norm for them to lose at some point, or have their downfalls eventually. However, DLSU Lady Paddler, Ian “Yanyan” Lariba, defied all odds and exhausted all of her five playing years for the Green-and-White on an undefeated slate in her games.

For a brief pass-through, Lariba was hailed as the Rookie of the Year of the tournament back in Season 74, and got the Most Valuable Player award in Season 75 and Season 77. For two years, she was named the Athlete of the Year for the entire league. For this 78th season, her team capped back-to-back championship in the women’s division of the sport. Lariba garnered another MVP plum to put the icing in the cake in her productive UAAP career.

She reminisced that her 2013 was a painful defeat, but it was used by her team to motivate themselves to capture the crown in the next two years.

READ  UAAP to honor student-athletes who have represented the country

She added “Everyone really taught and inspired each other. This year, we know that yung lineup namin matatag and sinasabi ko sakanila na may tiwala ako. We really wanted to focus on every point and we tell each other win it first for ourselves. Then we find our inspiration. If you know you have an inspiration, you know that whatever you do is worth it.”

Aside from the championships, one striking feat of the Cagayan de Oro native in her table tennis career was being undefeated in all of her games. She says that the road to achieving it is not easy but attainable. She shares “Hindi siya imposible kasi alam ko naman na I got my team’s back, I got the Lasallian community’s support. I’m really just happy and thankful for La Salle for giving me the opportunity. It’s really a great privilege.”


Furthermore, the drive and hunger for success was fueled by her mental toughness and said that having an on-point mindset helps a lot. “Sinasabi ko sa sarili ko na if I play, I wanted to play like an underdog, but with a heart of a champion so parang alam ko kasi na inaasahan ako ng team. Sobrang pasasalamat ko din na pinagkatiwalaan ako. I’m blessed to have them.”

An emotional Lariba ended her 5-year stint in one of the prestigious collegiate leagues in the country and shares “I’ll really miss this feeling. Pagkasabi nilang mami-miss nila ako, dun palang naiiyak na ako. Being part of this team and being part of this family and sabi ko tuloy niyo lang ginagawa natin”. In addition, she shared the “ANIMO” recipe to her success:

“Yung animo parang A-As we play, always give all, N-Never giving up, I-Inspiring others, M-Motivate each other kahit anong mangyari and O-Ohana, meaning family kasi for the last five years, family really helped me a lot to grow as a person and everything else”.

As she exits as a Lady Paddler, she believes that there will be no sorts of difficult in filling up her spot as she explains “Naniniwala ako na malakas yung team na to kasi it’s a sisterhood, a family. And andyan naman yung mga coach para mag gabay and I always tell them to show other people about being a Lasallian athlete because being a Lady Paddler is something you can be proud of.”

Personally, the National team member lives in the moment and pointed out that she plans to finish her Finance degree in the university and embrace whatever comes after that. “(I have) three terms left for me in La Salle, and I will be graduating in Oct(2016) and kung ano mang opportunity, kukunin ko. I just want to live everyday of my life as if it’s my moment and I just want to cherish that”.

Bottom-line, the humble Lariba was simply thankful for the blessed career she had and the opportunity to carry the name of her school with it. “Sobrang thankful talaga sa teammates ko, sa managers, Lasallian community, sa OSD(Office of Sports Development), and especially kay God kasi binigay niya samin to kasi sobrang worth it.”

Related Topics:Ian Lariba
Up Next