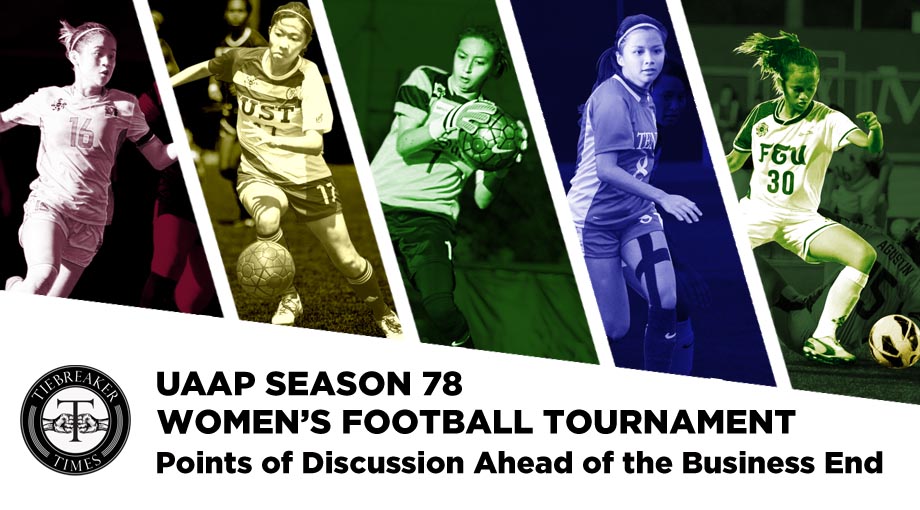 As much as the sweltering summer heat, action in the UAAP Women’s Football Tournament will just begin to sizzle even more once the Holy Week break ends. Every team remains in the hunt for a place in the final, making every game more exciting down the stretch. A two-week break set to end this Saturday gave all camps the opportunity to regroup as the battles will only get more difficult approaching the business end of the season. While we await the resumption of the season, we tackle some talking points surrounding each of the five teams In the tournament.

DLSU Lady Archers: “It’s dangerous to be on top”

Results have been going very well for the DLSU Lady Archers. By sweeping the first round of eliminations, they have given themselves a great opportunity to return to the final after a two-year absence. Currently, the Lasallians are three points clear of second-placed UP with everyone else playing a game more than them already. Throughout the first round, DLSU only allowed three goals–all of which came against Ateneo in a thrilling 4-3 opening day victory–and kept a clean sheet in their succeeding matches.

None of it should matter though, according to Coach Hans Smit. Even with a formidable start to the season, the Lady Archers are not without flaws. For him, the girls have a long way to go and it’s still too early to say that they have proven something already. “It’s dangerous to be on top. Everyone’s out there to topple you,” emphasized Smit, when asked about his high-flying team.

The players themselves are also aware of the perils their current position brings. During the first round, national team standouts Inna Palacios and Sarah Castañeda remarked that the team still has a lot more to offer and that they are doing everything to maintain focus until the very end. After all, if there’s a team that knows how the first and second rounds differ, it has to be the Lady Archers. In their last two finals appearances, DLSU mounted strong runs in the closing half of the elimination round to barge into the last dance. They may not need to do that this time around, but they might just have to in order for them to keep getting better as they progress in a season wherein bagging a championship is totally attainable.

UP Lady Maroons: Picking up the pace by overcoming inconsistency

Like a roller coaster ride, the UP Lady Maroons’ season has been going up and down as it goes thus far. They have won twice and then lost twice before winning again, via a 3-1 comeback win against UST, to start off their second round just before the Holy Week break. Right now, their place in the table is good enough to merit a place in the final. Yet what UP Coach Anto Gonzales, and perhaps everyone in the team, aspires for is the team’s ‘perfect effort’ on the pitch.

It can be argued that the so-called perfect effort the team thrives on hasn’t really been there throughout the campaign. There were a few games wherein Gonzales thought his team played below their standards, including their 2-0 victory against the Ateneo Lady Eagles. In those games, the Lady Maroons seemed to miss the goals set unto them by their coaches. Those were the times the team looked flat and relied on a handful of people to get something out of a game. As a result, frustration crept in at some points of the season, particularly when they slipped to a 2-0 loss against the DLSU Lady Archers. Despite all of that, UP is still in a good position to make it all the way this season. From here on though, they have to build on their promising victory against the Tigresses.

For them to ignite a strong push towards the end, the Lady Maroons may simply have to stay true to their objectives as a unit. Those targets could be viable measurements of their progress and may also serve as means to gain steam as they look to make it back to the final this season. Three more games remain for UP in the elimination round, meaning a few more opportunities–perhaps just enough–to polish their game. If they get to establish consistency, there is little reason to think that the Lady Maroons won’t make it to the top this time around.

Another rough first round was on the books for the Ateneo Lady Eagles. While playing quite fairly, they only managed to win once throughout the first round–a lucky 2-1 win against UST. It can be argued that they played far better in the three times they lost in comparison to that victory. Good thing for the girls from the blue side of Katipunan is that they bagged an important win over FEU to start off things nicely in the second round. As it stands, they are level on points with the reigning champions and just three points behind second-place UP.

After shocking the defending champions FEU, the Lady Eagles are definitely on a high. Not winning that game may have effectively kept them out of the running already, but the team put up a solid performance to fend off the dominant Lady Tamaraws. Taking home a pleasant result that night, Ateneo knows that there’s still an awful lot left for them to do if they are to succeed this season. Geared to take it one game at a time, the Lady Eagles’ focus are solely on this weekend’s clash. They will entertain fierce rivals and current league-leaders DLSU. At this point of the season, every team couldn’t afford to drop points so the Lady Eagles will surely look beyond the rivalry for motivation.

Perhaps the result just before the Holy Week break is the turning point the ladies in blue are looking for. If so, they have it in their hands. Confidence is a trait of winners and they must muster enough to rally themselves into the final.They have been knocking on the door for three years now and have just missed out in each of their attempts. Getting the right results at the right time will surely help their cause and quite consequently pad their belief towards breaking their duck, and who knows, going all the way.

FEU Lady Tamaraws: Smoothen the transition for the newcomers

With only two wins to show out of the five games they already played, it’s quite safe to say that the FEU Lady Tamaraws aren’t their usual selves in Season 78. After all, they lost several key players to graduation and academic issues that leaves them with only four experienced campaigners in the starting line-up. Not in a position they are used to in recent times, the Lady Tamaraws may still gain ground should they usher in the new breed of players seamlessly.

As more than half of the starters are lacking in experience, the main responsibility to prepare them for the tough nature of the tournament lies with the coaching staff. Speaking after their games, FEU Coach Let Dimzon noted that the young players are clearly trying to cope with the demands and while it may take some time, she is seeing the potential in the team. How long it would take is another concern, but the likes of Alesa Dolino, Barbie Sobredo, Brigette Kadil and Sharmine Siaotong could do their part by providing the know-how to becoming champion players from relatively inexperienced newbies. At the same time, the seniors can show the way for them through leading by example. Dolino, a graduating student, in fact expressed astonishment in contributing to her younger teammates’ development as football players.

With regards to their title defense, it is not yet too late for FEU to act on it even if they already lost three times this season. Their next game against UP offers them the chance to go level on points with their Maroon-clad foes. With familiar faces expected to be hounded in their upcoming battles, the young guns may provide a much-needed helping hand to carry the team into a position they have been resting in the last three seasons.

The UST Tigresses are lurking at the foot of the table with only three points out of the 15 in the offing. It definitely doesn’t sound like a great season for the girls from España as they are now on the brink of getting eliminated from title contention. There have been plenty of problems plaguing the Tigresses so far this season, but nothing comes more bothering to them than their poor defensive shape.

Only UST has conceded goals in every game played this season. In fact, they have given away at least two goals per game, truly underlining their problems at the back. The UST defense shows promise by holding most of their opponents in the early goings of their matches. Out of the five they have played this year, they were able to keep a clean sheet three times going into halftime. The issue seems to be about as 14 out of the 18 goals they allowed this season happened in the games’ last 45 minutes. This isn’t a good sign at all for the Tigresses, who fortunately have three weeks to regroup.

Improving the defense will boost the Tigresses’ chances of finishing strong this year. They haven’t been too bad offensively, scoring in all but one of their matches this season. Communication has been identified by the Tomasinas as a thematic problem and while it is crucial to build the offense, it is also integral in staying sturdy at the back. With a neat record in front of goal, the Tigresses may just have to fortify the backline in order for them to improve their fortunes in Season 78.

Women’s football will take center stage this weekend when two rivalries in the league renew atrocities. On Saturday, the Lady Archers and Lady Eagles will collide in a match always filled with intensity. The following day will feature last year’s finalists FEU and UP, a game that has brought a lot of passion out of both teams in recent years. Both games will kick off at 5:30 in the afternoon.