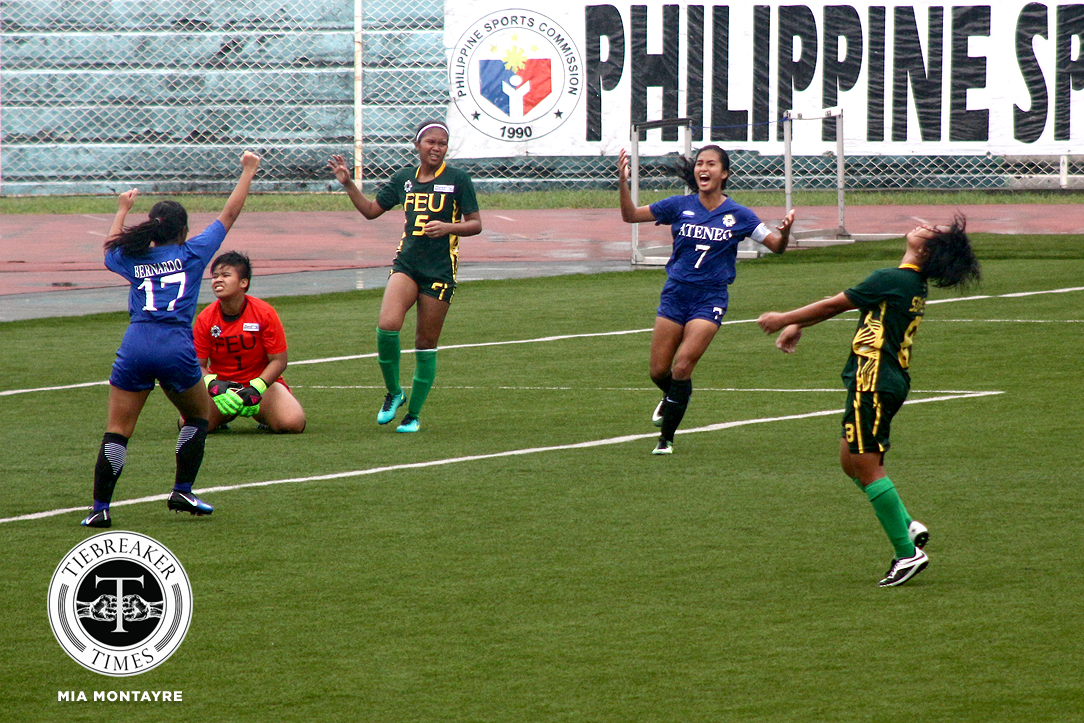 The Ateneo de Manila University Lady Eagles preserved their winning ways, but had to do it the hard way this time as they fell behind three times but overcame each time to grind out a 4-3 win against the Far Eastern University Lady Tamaraws, Saturday afternoon at the Rizal Memorial Football Stadium.

As the armband suggested, it was Camille Rodriguez who stood out for Ateneo. The skipper registered the first hattrick of the UAAP Season 79 women’s football tournament to propel her team over the FEU team they have struggled to beat in previous encounters.

As mentioned, it was not an easy game for Ateneo. Under rainy conditions, the game started slowly, as both teams carefully plotted their moves to deconstruct the other’s game plan.

Gradually, it was FEU who played more with the ball, moving it patiently around to their pace. Their dominance in possession manifested in the 13th minute, when an Ateneo error put them in front.

Before the opening goal happened, an incisive pass from the right allowed captain Jovelle Sudaria to lurk unmarked down the left wing. The FEU midfielder only had Ateneo goalkeeper Marriane Caparros to beat, something she wasn’t able to do as her shot was blocked for a corner.

Her move may not have immediately yielded a goal but it was the resulting play that got the ball rolling in the game. A poor corner delivery should have been safely cleared from danger but instead, Nina Catedrilla’s header took a wicked spin into her team’s net.

Facing a deficit for the first time this season, the Ateneans battled hard to restore parity. They asserted themselves from the moment they went behind and got their just rewards six minutes after going behind. Pam Diaz provided the touch to level the score as her initial shot was poorly cleared, allowing her to slot the rebound into the back of the net.

Diaz’s goal appeared to have ignited the pace of the game as it drew an immediate response on the other end of the pitch. Awarded a free kick just outside the box, FEU did not let the glorious chance to to waste. Sudaria expertly sneaked the ball above the wall and in to retain the advantage for the Lady Tamaraws.

Yet like the first one, FEU’s second lead did not last long. A handball incident against the Lady Tamaraws inside the box presented a chance for Rodriguez to tie the game once again. FEU goalkeeper Kimberly Chavez guessed the Ateneo captain’s shot correctly but she was powerless in keeping it out.

The score remained 2-2 at the break, but not without decent opportunities for either team to grab the game’s fifth before halftime. Moments after Rodriguez’s goal, Isay Sabio headed the ball just over the bar. Meanwhile, Caparros had two uncomfortable moments with the ball that nearly gave the Lady Tamaraws the chance to punish her.

The second half started with neither team ahead so it was not surprising that the flow in the opening minutes was similar to the first half. A rugged back-and-forth action between two uncompromising teams took place, with an unfortunate error looking like the major factor that would lead to the fifth goal both sides craved.

Indeed, it was a mistake by Ateneo that brought FEU back in the front seat 58 minutes into the positively cagey affair. Caparros misjudged a looping ball inside the box, giving room for first half substitute Bia Requerme to tuck the ball in from point-blank range.

#ReadMore  Omega dealt second loss in ONE: MWI by GPX

With their backs against the wall, the Ateneans kept on fighting as they have done in the earlier stages of the duel. Luckily, a huge moment in the game went their way in the 65th minute. Kim Cupal unwisely retaliated to Tiffany Siy, who fouled her, by throwing a needless punch to the Ateneo player. It merited a straight red card, bringing FEU down to 10 players. Siy, on her part, received a booking for her initial challenge.

Having one more player, it spurred Ateneo to capitalize. “After that, we gained a little advantage because they’re one man down and we were sort of in a momentum already. We were constantly attacking. Having that red card, it boosted us pa,” noted player of the match Rodriguez.

Towards the last 15 minutes of the game, the advantage of having an extra player paid off as Rodriguez struck twice to seal her hat-trick and at the same time turn the game on its head, giving Ateneo the 4-3 lead they went on to keep until the end.

The first of her goals was a bit fortunate as she pounced on a loose aerial header that set her free on a one-on-one situation against Chavez. Known for her killer finishing, the Psychology major drilled the equalizing effort with 14 minutes remaining.

Ateneo did not need all of the 14 minutes to follow it up as Rodriguez’s third goal of the game came just two minutes after she scored. Given space to shoot, the Ateneo captain buried the effort inside the box to the delight of the Ateneans in attendance as it proved to be the deciding goal of the match.

Not before a twist in the tale, however, as FEU looked to have been given a penalty in the 87th minute. The referee initially pointed to the spot, awarding the penalty due to a foul committed by Caparros on Ina Araneta.

Fortune favoured Ateneo in the end as the linesman adjudged Araneta to be in an offside position, which would be enough to nullify the foul. The referee heeded the call of his assistant, much to the relief of the Ateneo bench.

Regarding the ladies in blue’s effort, the coach who once led the Ateneo men’s team to a championship lauded the team’s unwavering character in a demanding game against quality opposition. “‘Yung spirit nila kahit they’re down three times down by one, ang maganda dito sa team na ito is talagang they proved na kaya nila,” he elaborated.

In unfamiliar territory on top of the table after two games, the experienced Ateneo coach is hoping that the positive results won’t breed overconfidence. After all, he still believes that they are still miles away from the level he wants them to reach.

Aware of the consequences complacency could bring, Rodriguez affirmed the sentiments of her coach. ”It feels good but it’s not yet over. We’ve just done two games so we still have six more ahead of us,” she stated.

Sitting pretty on top of the table with six maximum points, Ateneo will take a break before going up against their rivals, La Salle, in two weeks time. As for FEU, they will look to get their first win when they meet UP next Saturday.