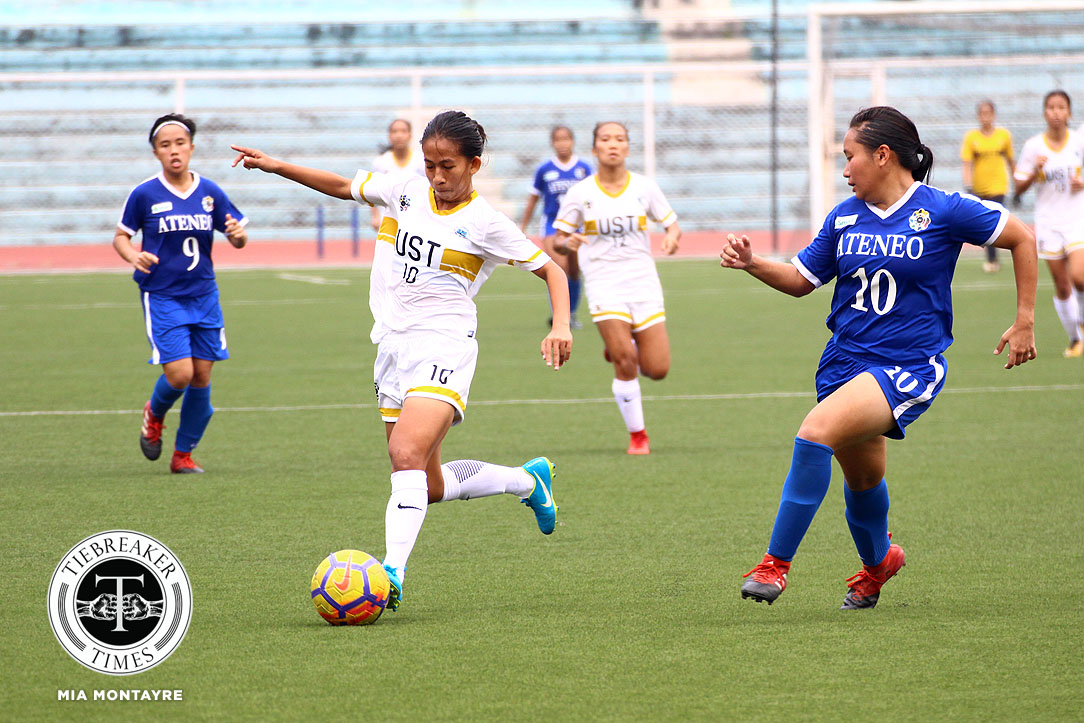 The University of Santo Tomas Lady Booters barged into the win column with a 2-1 come from behind victory over the Ateneo de Manila University Lady Eagles, Saturday morning at the Rizal Memorial Stadium in Manila.

The first half was a goalless affair between the two schools. It was the Lady Booters, though, that came closest to breaking the deadlock when the referee spotted handball in the Lady Eagles’ box.

Charise Lemoran stepped up to take the spot-kick only to see her penalty saved as Lady Eagles goalie Marie Caparros guessed correctly to save the attempt. It was in the second half when the Lady Eagles and Lady Booters found their shooting boots.

Tessa Bernardo opened the scoring just four minutes after the restart with a freekick that went past UST goalie Nicole Reyes. However, the Lady Eagles failed to capitalize on their momentum as the Lady Booters woke up from their slumber.

UST scored two goals in the span of nine minutes to turn the game on its head. Mae Cadag leveled the score with a longshot that went over Caparros at the 56th minute. Likewise, Lemoran made up with her penalty miss earlier with another long strike at the 65th minute.

The Lady Eagles failed to mount a comeback as Reyes’ goal was relatively unharmed. Deep into stoppage time, Ateneo center-back Nichole Calimbo’s unleashed a freekick that went narrowly over the bar.

#ReadMore  Ricci Rivero almost studied and played in the US twice

Both UST and Ateneo shall next play on February 14 at Rizal Memorial. UST shall face defending champions De La Salle University at 9:00 AM while Ateneo will play versus Far Eastern University afterwards at 3:00 PM.