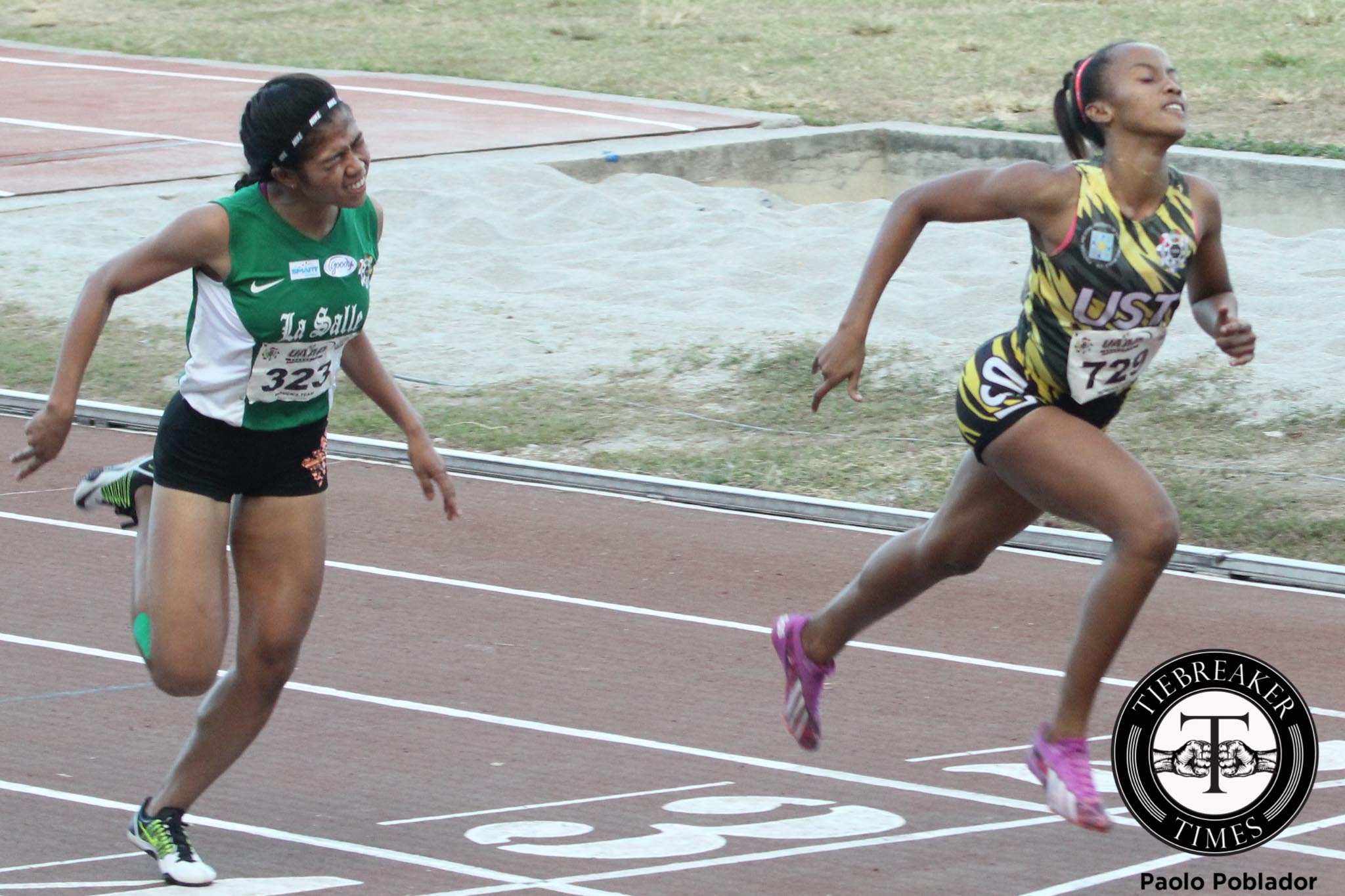 The University of Santo Tomas (UST) had virtually won the competition by day three. After finishing 1-2-3 multiple times on the podium and scoring consistently in almost all events, it became harder and harder by the day for other teams to keep up with their pace and hold on. Their 465 points in the competition prove that they’re the team to emulate in the women’s division.

They were almost 100 points ahead of the Far Eastern University (FEU) who only managed to score 371.5 points in the tournament for the second place podium finish. The top three saw the same schools, as the University of the East (UE) placed third in the total point tally with 196 points.

Rookie 100m and 200m dash champion Karen Janario of UST came in first, clocking 14.93 seconds in the heats, beating last year’s gold medal winning time of 15.19 seconds. Coming in second to challenge her in the qualifying round was Rendora’s teammate Melissa Escoton, who clocked a close 14.97 seconds.

Other qualifiers were FEU’s Renalyn Aguirre, who placed third in the qualifiers with 15.12 seconds. Three other UST athletes also qualified in the finals, with their multi-awarded sprinter Michelle Loterte ranking fifth with 15.42 seconds. The other two UST athletes were their heptathlon competitors Judy Almasa and champion Sarah Dequinan, who both clocked 16.05 seconds and 16.12 seconds for seventh and eighth place respectively.

Around an hour was given before the finals of the hurdles race, which paved way for the 1500m run. UE’s 5000m and 10000m double gold medalist Macrose Dichoso struck another gold in this event after running an impressive 4:52. Coming in at second and third were F EU’s Joida Gagnao with 4:54.60 and Adamson University’s (ADU) Lyca Sarmiento with 4:54.62, who battled it out in the last 100m with the former getting an edge to the finish line. The only other runner who dipped below five minutes was UST’s Louielyn Pamatian who clocked 4:57.44.

Janario, Escoton, Aguirre, Rendora, and Yorac were all seeded to fight for the gold medal spot in the final of the 100m hurdles. Rendora and Yorac won big last year; Aguirre showed promise this year; and Janario and Escoton showed off their speed as they were the only ones who dipped sub-15 seconds in the qualifiers.

The rookie Janario took the lead and kept it as she finished with an even faster time of 14.76 second for the gold medal. Coming in second was last year’s gold medalist Rendora, who showed that her qualifying time was just for qualification and she still had it in her. Rendora finished with 14.85 seconds, only 0.04 seconds faster than her teammate Escoton, who finished with 14.89 seconds.

With the absence of UE’s Jennyrose Rosales to provide their team with a sprinter who can obliterate most 400m competitors with her impressive 54-second runs, both UST and FEU had a chance to finally compete for the gold.

Without a doubt, UST’s sprinting stronghold prevailed, with their team winning the gold by clocking 3:57.60. Although it was over five seconds slower than last season’s, it was still enough this season to win the gold and assert their dominance one last time. UE were over two seconds behind UST after only managing to clock 3:59.00 this year; their relay team evidently felt Rosales’ absence. However, UE still managed to beat FEU, who failed to clock sub-four minutes. FEU registered a time of 4:06.86 seconds for bronze.

The last field event for the women was the long jump. After only managing to place seventh as a rookie, DLSU’s Mary Diesto came out strong this season by winning gold with a jump of 5.72 meters, almost 0.5 meters better than her jump 14 months ago. Heptathlete Judy Almasa, who’d had over 24 hours’ worth of rest, showed that she hadn’t been dulled as she won silver with 5.51 meters. Teammate Rosnani Pamaybay jumped 5.38 for the bronze medal, which gave UST a more commanding lead in the championship hunt.