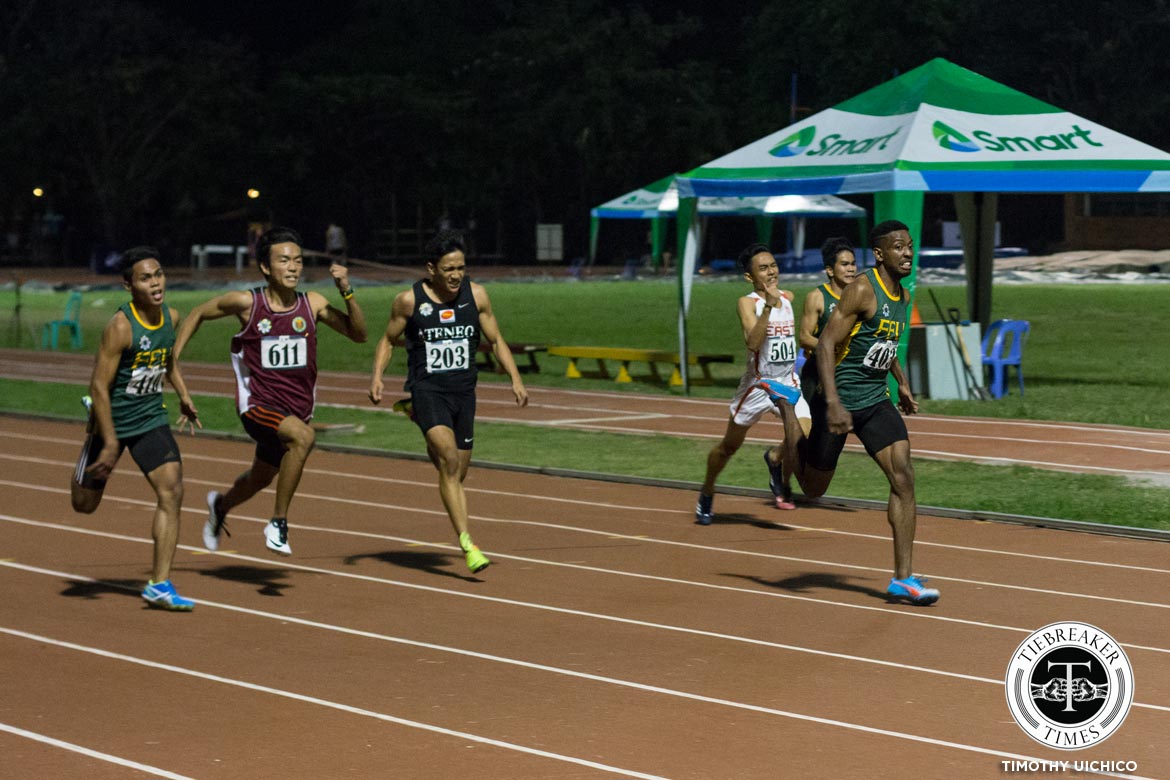 Author’s note: Decathlon results have yet to be published

The 79th season of the University Athletics Association of the Philippines tournament for men’s track and field kicked off Wednesday at the Philsports Complex in Pasig City.

Far Eastern University (FEU) will try again within the next five days to recapture another title and snag it for the seventh time, having started their undefeated reign since season 73.

Much like last year, University of Santo Tomas, De La Salle University, and University of the Philippines are hoping to break the streak of FEU’s reign.

Although FEU has a strong showing in almost all events, both the combined forces of UST, DLSU, and UP in their respective strong events may lessen FEU’s conquest in all events, and a close fight for the championship may be witnessed.

The heats of the 100m dash was a fast one, with over half of the qualifiers clocking times below 11 seconds.

Coming out on top is defending champion Clinton Kingsley Bautista of FEU, who clocked a fast 10.90 second sprint. Up in close second was Jose Maria Ramos of ADMU who was just 0.02 seconds behind, with a time of 10.92 seconds.

The other two athletes who managed to join the sub-11 club for the qualifying round were William Galceran of FEU and Jaime Immanuel Mejia, who both clocked 10.96 seconds.

The finals of the 100m did not disappoint, with Bautista comfortably defending his title with a time of 10.81 seconds.

READ  JRU does enough against Mapua to extend streak to 4

Mejia fell short of the podium after only clocking 10.99 seconds placing him in fourth. Ramos, who came out strong in the heats, cramped up at the 70m mark and only managed to clock 11.07 seconds for fifth place.

UST and DLSU duke it out without FEU

Both UST and DLSU had a strong showing on all the other events for the day.

Philippine national record holder EJ Obiena was untouched in the pole vault after clearing a height of 5.30m. It was an easy win for the Southeast Asian Games silver medalist.

Coming in behind Obiena were decathlon record holder Janry Ubas of FEU who cleared 4.50m for silver, and David Managuelod of UP who cleared 4.40m.

FEU only had one entry in the top eight. Others who made it to the top eight were filled up by DLSU and four UE vaulters.

A similar occurrence happened in the shot put event. DLSU’s Kenneth Rafanan came out on top after throwing the shot put at a 13.03m distance, with UP’s Fel Quetulio falling short after only managing to throw 12.99m. Third place went to UST’s Mark Conrad Manipon, who threw 12.51m, well ahead of UP’s fourth place finisher Elijah Guevarra who threw 12.18m.

The 800m was also a blow for FEU’s hunt for a title defense as no one from their team qualified for the finals.

In the finals however, it was Parcon who managed to come out strong on top after clocking 1:56.92, almost two seconds faster than his qualifying time, and around half a second faster than the second place finisher.

Icao, who came in close behind Parcon in the qualifying round, repeated the process and managed to bag the silver medal, with a time of 1:57.41. Redoble was consistent with his time, after knocking out a similar time with 1:57.42 to win the bronze medal.