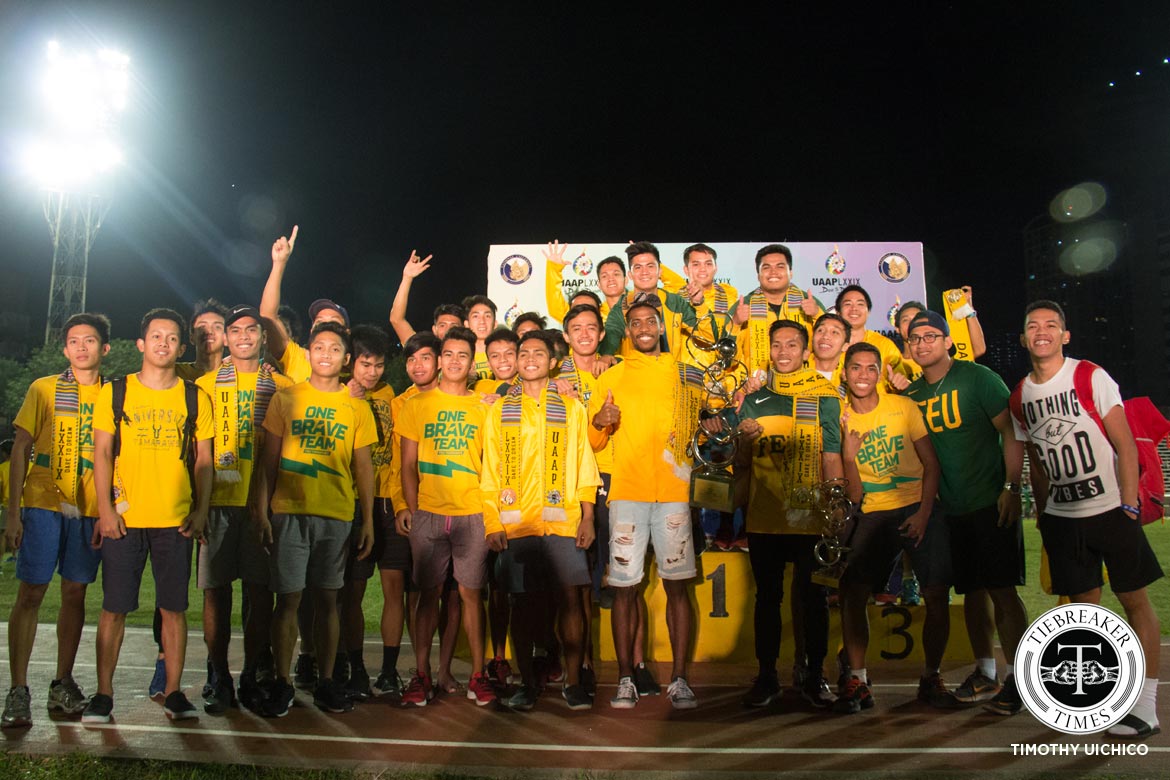 Wednesday night saw the Far Eastern University (FEU) dominate the track yet again. Much like what the team did in the long jump, they managed to win gold, silver, and bronze medals in the triple jump led by Janry Ubas, Kirk Bacas, and Kieth Quilo, accelerating themselves much further into securing the championship.

However, later that night, horror struck as FEU got disqualified in the 4x100m relay from the first to second leg. The baton was never even circulated in the oval. This had University of the Philippines (UP), University of Santo Tomas (UST), and De La Salle University (DLSU) win the gold, silver, and bronze medal respectively in an effort to keep their respective team’s podium finish aspirations alive.

This did not dishearten FEU, as coming into the last day, their lead among the other teams was big enough to grant them early celebration. FEU was going to defend the title, and it was only a matter of extending the lead further with the remaining events: 110m hurdles, hammer throw, 1500m run, and the 4x400m relay.

Sharing the spot light a bit that afternoon were the performances of EJ Obiena—the pole vault champion and current UAAP and national record holder—in the 110m hurdles, and the DLSU 4x400m relay team. Both performances saw new records being set in an unexpected manner.

Bautista Still on Form Despite Fatigue

Bautista is the defending champion coming into the race. Last season’s memorable performance of jogging the qualifying round and then comfortably winning hold in the finals with a time of 53.80 seconds may be matched this year with a more experienced Michael Del Prado and Jaime Mejia, from DLSU and UP respectively.

Coming on top off of the qualifying round was UST’s Joel Hera, who ran 54.53 seconds.

Roque Lesondra, who just came off of the decathlon and the 400m heats on Thursday and Friday night respectively, edges out Mejia in the qualifying round. Lesondra clocked 55.68 seconds, placing him third overall. Meanwhile, Mejia clocked 55.81 seconds which put him in fourth place.

Running a relaxed qualifying round to reserve some energy was the recently crowned 400m champion Del Prado. He ran a comfortable 56.00-second quarter-mile hurdle race.

The finals was completely different from the qualifying round as all aforementioned athletes ran significantly faster times.

From start to finish, it looked like Bautista wanted to win big league. After crossing the finish line for the gold medal, Bautista managed to clock 52.81 seconds, over a second improvement from his time last season. This massive victory for Bautista had a bonus reward, as it was later on announced the he managed to set a new UAAP record.

Coming into the homestretch, it seemed like Mejia was going to take away the silver. However, nearing the last hurdle, both Del Prado and Hera managed to close the gap. The battle for the silver was close, with Del Prado managing to bag the silver after his successful acceleration off of the last hurdle. Del Prado finished with 53.72 seconds.

Hera successfully dove into the finish line to win the bronze medal with a time of 53.84 seconds, edging out Mejia by just 0.03 seconds. Mejia finishes fourth, clocking 53.87 seconds.

Both Bautista and Unso represented the Philippines in the 2016 Southeast Asian Games in Singapore.

Bautista sought again to reclaim his title and add another gold medal to under his neck. He demonstrated this after clocking 14.65 seconds to top the qualifying round. Coming in close was EJ Obiena who clocked 14.78 seconds to claim second spot.

National 110m record holder Patrick Unso, who set that record in the Southeast Asian Games finals last year in Singapore, ran a comfortable race, clocking 15.19 seconds to qualify for the finals. Behind him was Jaime Mejia of UP who clocked 15.27 seconds.

Despite recently recovering from an injury, Unso was still seeded to win the gold medal. He has demonstrated in past UAAP races that he can still hurdle through the barriers faster despite the odds stacked.

After the gun went off in the finals, it was clear that Unso, Bautista, and Obiena were going to duke it out until the finish line.

Obiena took the early lead coming off of the first hurdle but stayed in the air for a bit longer come the second hurdle, allowing Unso and Bautista to close the early advantage.

Coming off of the last hurdle however, Obiena managed to gain just a bit of a lead. This was a pivotal point in the tight race between him and Unso as it gave him the momentum to drive it all home.

Unso comes in at second spot to win the silver medal with a time of 14.41 seconds, also surpassing his older record.

Coming in behind Unso was Bautista who slowed down after coming off of the last hurdle to win bronze, clocking 14.68 seconds.

Apart from the gold medal in the 400m hurdles Saturday night, FEU also managed to secure three additional gold medals for that night.

In the 5000m run, Philip Gongob handed his school another gold medal after edging out University of the East’s (UE) Reynold Villafranca. It was a sprint match coming into the homestretch, with Gongob having upper hand, winning with a time of 15:41.28, just 0.19 seconds above Villafranca’s silver medal-winning run of 15:41.57. UST’s Kevin Capangpangan was a bit behind the two, clocking 15:48.99 for the bronze medal.

In the high jump, it was FEU vs. FEU as Quilo went up head-to-head with Ubas. The eventuality of the match led to a draw, as both athletes cleared 1.99m, while having the same foul accumulation.

Tommy Balbuena of UE fell short of this duel after only managing to jump 1.96m.

Much like the high jump, it was yet again another FEU vs. FEU for the gold medal in the discus throw. However, Rejohn Cliff Gadian made sure that it was not going to be a close fight, after throwing 38.04m for the gold medal. This was over 3.0m ahead of his teammate Johnwel Quitain who threw 35.21m for the silver medal. Coming behind of Quitain was UP’s Elijah Guevara, who threw 34.70m which had him take home the bronze medal.

The only event FEU did not get into the podium in was the 5000m racewalk, which had UST’s Lambert Padua defend his title, crossing the finish line in 24:10.47, just over three seconds off of his UAAP record time last year.

Padua had been in foul trouble earlier on in the race, with UE’s Edwin Verdera, Jr., giving him a hard time. However, Padua played a smart race, as he used his veteran experience to marginally lessen the gap and overtake Verdera despite having foul trouble. Verdera managed to finish in second place, winning the silver medal with a time of 24:38.70.

UST’s John Lloyd Lamaclamac won the bronze with a time of 26:37.07, well ahead of FEU’s Jong Johan Penetrado who clocked 27:50.46 for fourth place. He also defeated the 10000m racewalk bronze medalist Jethro Esposo of UP who finishes in fifth place with a time of 28:11.49.

Other events FEU failed to take a podium finish in was the 1500m run and the hammer throw, both of which happened Sunday afternoon.

However, by Sunday it was already apparent that FEU will defend its title, having obliterated the field after its massive haul of medals and points.

This was not as easy task to accomplish, as he was trying to outrun 800m gold medalist Erwin Parcon of DLSU. Parcon tried to chase Villafranca down the homestretch, with the latter managing to prevail. Parcon takes home the silver medal, clocking 4:07.06.

Coming in at third was Capangpangan, who takes home another bronze medal with a time of 4:07.59, just a bit behind silver medalist Parcon.

The hammer throw was also another event FEU failed to lay claim a podium finish.

Despite not throwing as far as last year’s 48.20m that made him the clear winner, defending champion Fel Vincent Quetulio of UP’s throw of 41.05m was still enough for a gold medal.

Over ten meters behind was UST’s Mark Conrad Manipon, who threw 31.38m for the silver medal.

The eventual rookie of the year came from the bronze medal performance of Roberto Daniel Mercado of UP, who threw 28.21m to clinch third place. Mercado’s throw was 0.05m farther than discus throw gold medalist Gadian’s, who only managed to throw 28.16m, which places him in fourth place.

FEU did not have a complete line-up come the 4x400m relay event. With Bautista and Ubas already fatigued after five days of competition, and with their team already clinching the championship at this point anyway, it was easy for them to make the decision to give the event away.

At gunstart, it was DLSU and UST going head to head. After the first exchange, DLSU managed to gain the upper hand, gaining a lead of over 5.0m ahead of the competition.

At around the 200m mark, UST managed to overtake DLSU to take the lead. Come now to the last runner, UST had the upper hand. The tables have turned; it was now DLSU trailing UST.

ADMU and UP were the last two teams coming off of the exchange to the last runners.

Two kinds of catch-up performances happened come the anchor leg that would change the game.

DLSU caught up with UST come the last half-segment of the race in order to clinch first place. All it took now was to carry that momentum to the finish line in order to win the gold medal, clocking 3:19.38. The team consisting of Parcon, Jericho Ejercito, John Kenneth Nodos, and Michael Del Prado broke the former record of 3:19.40, a record that was set way back in 2005.

Meanwhile, it was a battle for bronze among the tailing schools.

Come the last 150m, UP and ADMU both managed to bolt themselves into fourth and fifth place, a major comeback that set back their medal aspirations back into life.

After setting a new Asian record less than 24 hours ago, EJ Obiena once more ended strong with a fourth-place finish in the 100th...

With things going well as planned and as executed, EJ Obiena finally rewrote the Asian record books. The 25-year-old Olympian has staked his claim...

EJ Obiena ended his campaign in the Diamond League with a fourth-place finish off a 5.83-meter clearance, Friday (Manila time) at the Stadion Letzigrund...

EJ Obiena bounced back once more and ended with 5.80 meters en route to a share of second place in the pole vault event...

EJ Obiena missed on a point in this leg, but nonetheless held on to qualify to the 2021 Wanda Diamond League final, Saturday morning...

EJ Obiena registered his best-ever performance, smashing his own national record with a new mark of 5.91 meters, en route to finishing second in...