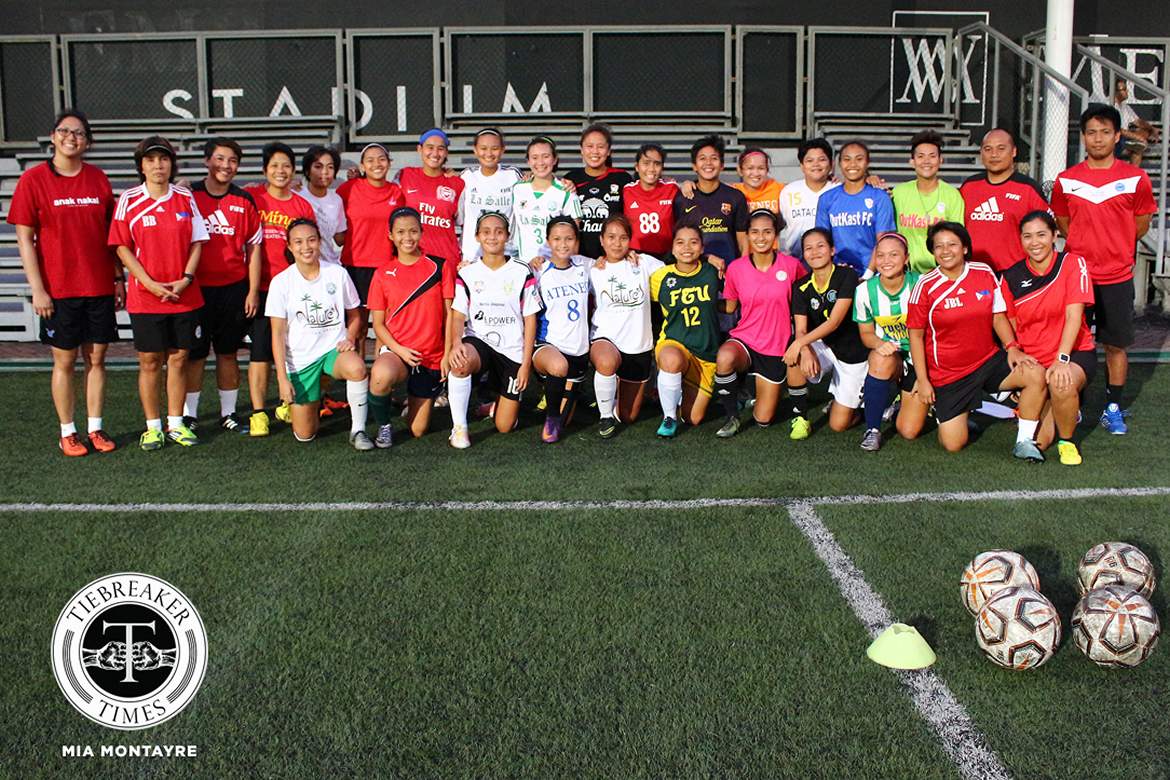 To kick off preparations for the AFC Women’s Asian Cup Qualifiers in which the Philippines will take part in April, the Philippine Football Federation held tryouts over three days, ending last Tuesday. Top performers from the ongoing UAAP season were invited.

A total of 43 players turned up at McKinley Stadium in Taguig City, mostly participants of the currently on-hold PFF Women’s League that is also comprised of the UAAP collegiate teams.

Members of club teams Green Archers United FC, OutKast FC, Hiraya FC, and Kaya FC took part, while players from UFL youth team Nomads FC were also present. Ye, it was the collegiate teams that the coaches were looking forward to seeing at the tryouts.

“Most of our potential players are in UAAP [where] the girls continue training and [have] games so they are actively playing football,” PFF technical director Marlon Maro noted.

Maro assures that the PFF is taking this campaign seriously in light of the favorable draw.

“The opportunity to advance is there already. We can see na nasa kamay na natin. Yun yung feeling namin sa PFF. So we have to make sure that we will send the best players,” he added.

Current league leaders for both the PFFWL and the UAAP De La Salle University sent their in-form striker Kyra Dimaandal along with Nina Arrieta, Irish Navaja and Mary Cristine Duran. For Dimaandal, who is on a hot streak since the women’s league in November that has carried over to the UAAP season, it would be her first invitation to the national team. Navaja and Duran were members of last year’s squad.

Active players from University of Santo Tomas’ squad were also invited, namely top striker Charisa Lemoran and taliswoman Hazel Lustan, but declined to participate with the team citing the UAAP season as their bigger priority.

It was also reported that members from last year’s team will be direct call-ups and did not have to partake in the trials, such as national team captain Inna Palacios and Sara Castañeda of DLSU.

The preparations for the AFC Qualifiers will move to the next stage starting on March 7. Overseas-based players will be expected to arrive and another set of trials will be in place for them, in which the locally-based players are encouraged to join as training.

After three days, the coaches, led by head coach Buda Bautista with the assistance of Freddie Estacion, Josephine Loren, and Anthony Albao, will select the thirty best players to make up the national team pool. This pool will begin intensive training on March 10, a day before the last UAAP fixture for the first round.

Bautista also revealed that it is not only the collegiate coaches who are helpful, but the UAAP board itself, which has agreed to move the second round schedule for the women’s games to after the qualifiers. This will give incentive to the student-athletes chosen for the pool to go into the training camp more concentrated and focused, not having to worry about their UAAP season.

After the first week of ‘open camp’, the team will move to ‘closed camp training’. “Yung March 17 up to the 30th, it’s a closed camp. Ibig sabihin, provided na lahat,” Bautista explained.

It is also worthnoting that Bautista and her coaching staff have already introduced the system that the team will be using at the tryouts. Fitness will no longer be a problem, with most of the players in the midst of their football season.

The team will be training at the Rizal Memorial Stadium, which the coaching staff hopes will be available.

The AFC Women’s Asian Cup Qualifiers will run from April 3 to 12 in Tajikistan, with the Philippines facing the following opponents: United Arab Emirates (April 3), Iraq (April 5), Tajikistan (April 7), Bahrain (April 10), Jordan (April 12). The top team along with Jordan will move on to the final round.