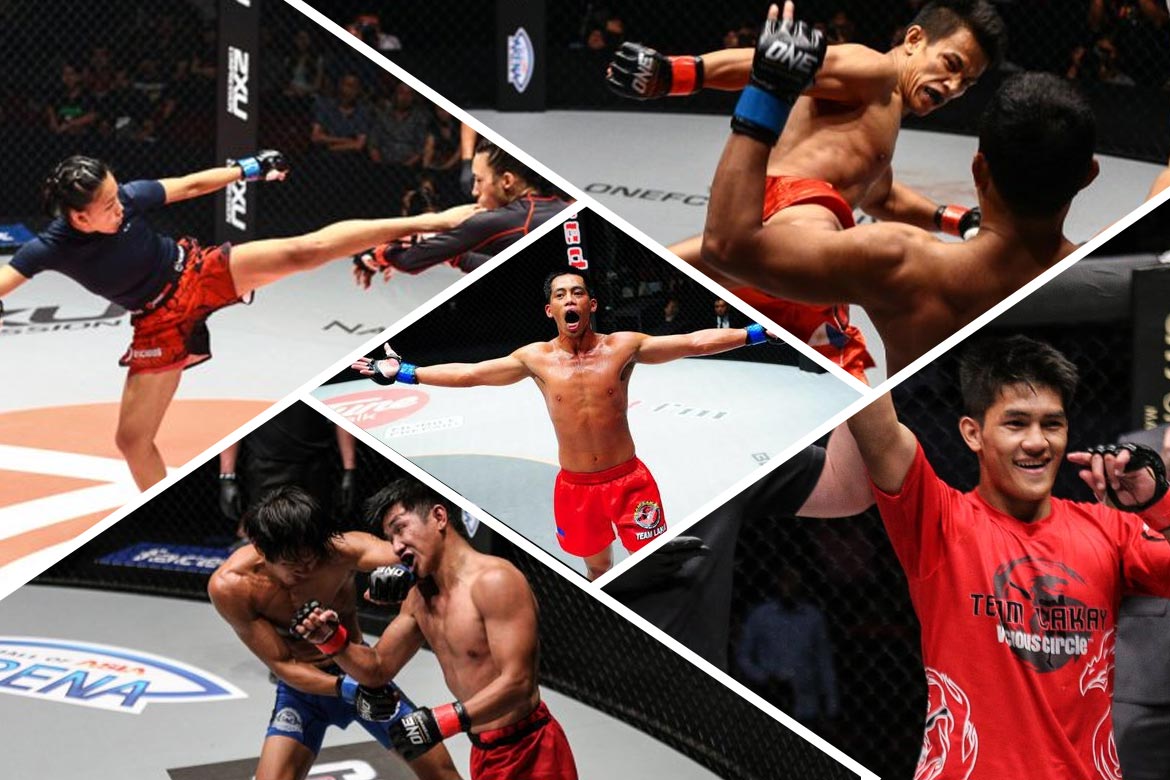 The most decorated fight camp in the Philippines look to cap its amazing 2016 campaign with a bang!

Five fighters from the prestigious fight camp have been booked in the undercard of ONE Championship: Age of Domination on Friday, December 2 at the SM Mall of Asia Arena in Pasay City.

Geje “Gravity” Eustaquio (8-4) is one of the most proficient wushu practitioners in the Philippines. His solid striking and grappling skills have led him to big wins over the course of his career in ONE Championship. Training in the high altitudes of Baguio City, Eustaquio hones his craft with his world-class teammates at the famed Team Lakay. Known for his ability to keep his composure while facing adversity, Eustaquio is set to do battle against Toni Tauru.

31-year-old Toni “Dynamite” Tauru (10-4-1) of Utti, Finland, is a professional mixed martial artist competing in ONE Championship’s flyweight division. He owns a record of 10-4-1, with seven of his wins coming impressively by submission. A feared grappling specialist, Tauru is looking for his first victory inside the ONE Championship cage.

Team Lakay’s Honorio “The Rock” Banario (10-6) has long been one of the Philippines’ most respected mixed martial arts veterans. His vast cage experience has brought him all over Asia, with many memorable battles against top divisional talent. Among his many skills, Banario possesses high-level striking and steadily improved grappling. The former ONE Featherweight World Champion, Banario is an expert in wushu, and is ready to showcase his lightning-quick strikes against Rajinder Singh Meena.

#ReadMore  Kevin Belingon guarantees fire and passion are back

Rajinder Singh “Knockout” Meena (8-2) of India is a professional mixed martial artist competing in the ONE Championship lightweight division. He owns a record of eight wins and two losses, with all eight of his victories coming by finish. Possessing a robust grappling skill set, Meena owns five impressive wins by submission.

Edward “The Ferocious” Kelly (8-3) is a 32-year-old Filipino MMA talent and one of the brightest featherweight prospects to emerge from the Philippines. A mixed martial artist with a complete striking and grappling skill set, Kelly brings Team Lakay’s world-renowned wushu to centerstage as he looks to showcase his expertise inside the ONE Championship cage. In his last bout, Kelly scored a one-punch knockout of veteran fighter Vincent Latoel. He seeks to replicate the feat this time against Sunoto.

Atomweight standout April Osenio (2-1) of the Philippines is known as Team Lakay’s fierce female warrior. The 22-year-old prospect trains out of the high-altitudes of Baguio City along with her more experienced Lakay brothers. In her last bout, Osenio upset Malaysian fighting belle Ann “Athena” Osman impressively by guillotine choke submission, highlighting her growing skills beyond the striking art of wushu. She now aims to advance her standing in ONE by taking on a new challenge in Jenny Huang.

25-year-old Jenny Huang (4-0) is female mixed martial artist who hails from Taiwan. Unbeaten with a professional MMA record of four wins and no losses, Huang also owns two impressive submission victories. In her most recent bout, Huang needed less than one round to finish off Indian fighter Jeet Toshi, winning by arm-triangle choke.

An unbeaten flyweight contender from Team Lakay, Danny Kingad is a professional mixed martial artist with a perfect three win, no loss record. One of the top prospects to come out of the high altitudes of Baguio City, Philippines, Kingad is a tremendous striker, operating out of his world-class wushu base. In his most recent bout, Kingad needed just one round to impressively stop Malaysia’s Muhammad Haidar. He will take on Eugene Toquero next.

Flyweight standout Eugene Toquero is a former celebrity mixed martial arts and fitness coach in his native Manila, Philippines. The Filipino stalwart has a knack for highlight-reel striking techniques and operates at a pace which opponents find hard to keep up with. In his last bout, Toquero nearly defeated former ONE Flyweight World Champion Adriano Moraes, losing by submission in a tough contest.