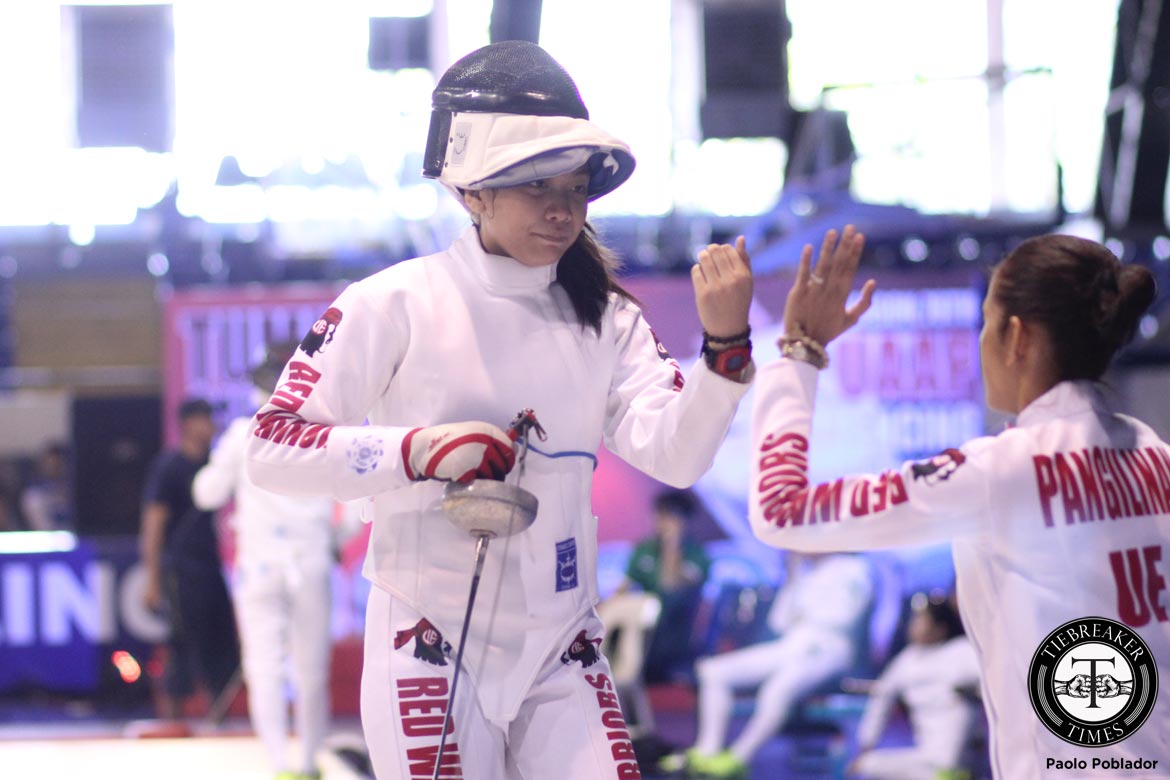 Leaning on fifth-year epeeist and women’s individual champion, Keren Panglinan, the University of the East Lady Red Warriors claimed one more gold, this time in the team event, after dominating De La Salle University in the Final, 45-26, Saturday at the Ateneo Blue Eagle Gym.

The Lady Warriors and the University of Santo Tomas Lady Tiger Fencers drew opening round byes by virtue of their strong finishes in the individual event. This left the other teams to fight for a slot in the semifinals.

In the quarterfinals bout between University of the Philippines Lady Maroons and La Salle, the latter drubbed the former, 45-34. The match was close in its first few bouts, before the Lady Green Fencers got some cushion through the performance of anchor Mikaella Castilo. This performance turned out to be La Salle’s first step towards the Finals podium.

On the other piste, the Far Eastern University Lady Tamaraws came from behind to upend the Ateneo de Manila University Lady Blue Fencers, 44-43. FEU led at the start before Ateneo senior Andie Ignacio pushed her squad into the lead, 40-39, at the penultimate bout. At the final bout, the Tamaraws’ anchor and individual bronze medallist Donabelle Gaoat held off Patricia Sarmiento and booked their place in the Last Four.

With both semifinal matches being played, the tussles between FEU and UE, and between La Salle and UST, turned the arena into a battlefield. The Lady Red Warriors stayed true to their monicker and their form as they whitewashed the Lady Tamaraws, 45-26. The UE fencers took the lead and never looked back, clinching a slot in the last dance.

On the other side, the Lady Green Fencers pulled the rag off second-seeded UST Tigresses. Castilo and rookie Divine Romero stayed solid in this outing with the Thomasians, shaking off the challenge from single-play silver medallist Gisella Rey and company. La Salle have not dropped a single bout en route to reaching the Final.

It was a different story in the Final, however, as UE were able to control the showdown from the very first “Allez!” Focus and teamwork were the keys to the victory, according to graduating ace Panglinan. “Nung una medyo kinakabahan [kami], pero nagtulungan lang kami. Sabi namin sa isa’t isa, “Magtiwala lang sa sarili.’”

With the win, the Lady Red Warriors got their fourth gold of the season with one event left to be played. That last event – women’s team sabre – turned out to be a classic.