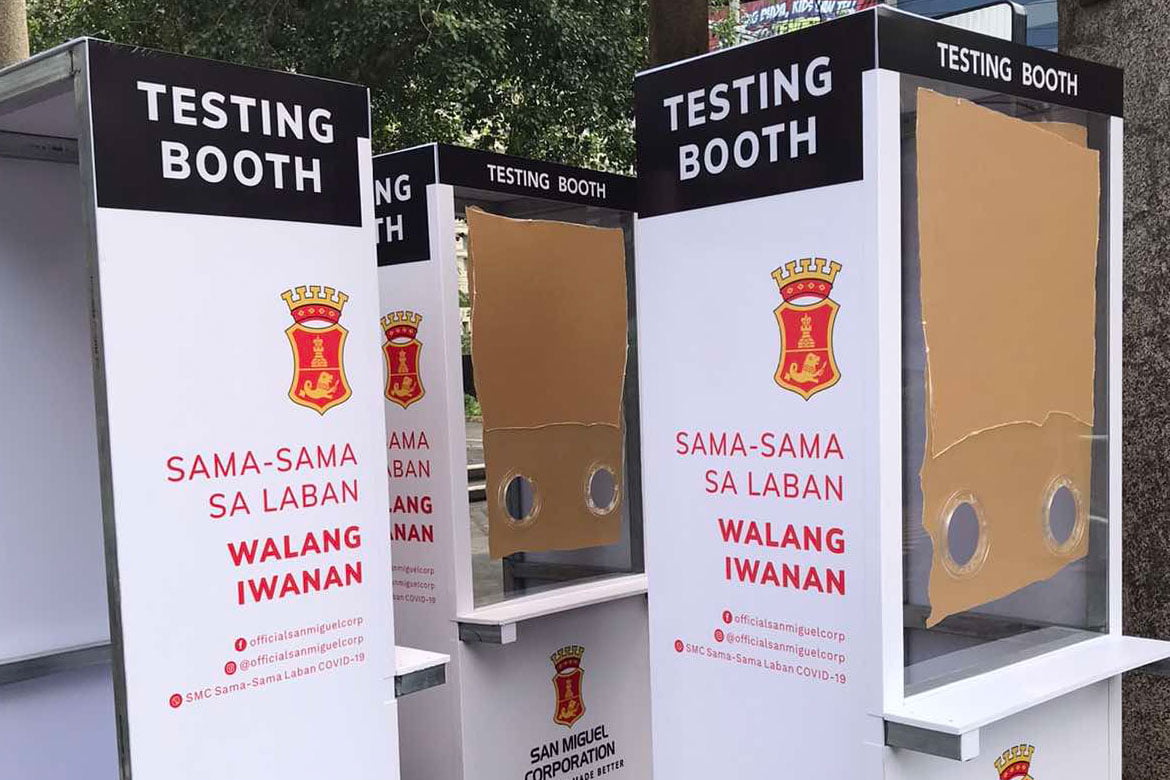 San Miguel Corporation is donating swabbing booths and PCR test kits to all 17 LGUs in Metro Manila to help them further expand testing at the barangay level and focus on areas with high-incidence of COVID-19. It is also putting up its own laboratory to test 70,000 in its network (Handout photo)

San Miguel Corporation has teamed up with 17 local government units in Metro Manila to put up more testing booths in areas with high density of COVID-19 cases, as well as donate test kits to allow the poorest communities access to free testing.

SMC president and COO Ramon S. Ang said the booths would be scattered strategically around areas in most dire need “so our local officials can easily ask people to get tested”.

“This is the best way we can help our local governments ramp up or expand their testing capacity–in particular, for poorer barangays and communities, even as the national government takes care of building our mega swabbing centers, which for now will be focused on our returning OFWs,” said SMC president Ramon S. Ang.

“Our aim is to help flatten the curve in our less fortunate barangays, especially in areas where there have been outbreaks. Our less-fortunate countrymen are really vulnerable because their living conditions make it harder to observe social distancing and other preventive measures. So we want to focus our efforts on helping them.”

He added that while local governments have initiated testing efforts and also have their own budgets to do so, SMC’s donation would help expand testing capacity, particularly as the government considers the lifting of the enhanced community quarantine in some parts of Luzon.

At the same time, Ang said SMC is moving ahead with plans to put up its own testing laboratory to test its 70,000 employees and extended workforce to help the government in its efforts to test aggressively and gradually reopen the economy.

“Apart from donating more test kits, we are increasing donation of high-capacity testing machines to help significantly increase the number of tests that can be processed daily to contain the spread of the virus,” Ang said.

He added, “Testing booths are just one component of the entire infrastructure for efficient widespread testing. We need to produce more test kits and make testing affordable, if not free, to the hardest-hit communities. We also need enough equipment to be able to process all these tests. We have to mobilize all these components to be able to test at scale.”

SMC is also donating three more sets of testing equipment, consisting of RT-PCR machines and automated RNA extraction machines, to specific health facilities and institutions in Metro Manila, including the National Center for Mental Health in its home city of Mandaluyong.

“There are many people and sectors in need of help today. We will make sure they are not overlooked or neglected.”

Ang also batted for the regulation of the price of testing, noting that some reports have it that people pay as much as P4,000 or higher for tests.

Making testing affordable is the right thing to do now given that “this pandemic has profoundly affected the lives and livelihood of millions of Filipinos,” he said.

He added, “We have to be able to find a way to regulate the price for testing. These test kits are in short supply but right now, we are fortunate to have been able to get them at less than one-thousand, five-hundred pesos each.

“We believe that this is a fair enough rate for medical facilities that are using donated equipment and PPEs to charge especially to small companies who would have to test their employees to be able to safely reopen their workplaces.”